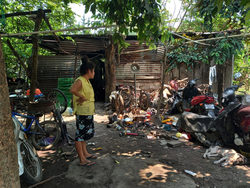 San Juan La Noria: the community abandoned to palm oil development
The village in Guatemala is surrounded by oil palm plantations but residents feel none of the benefits


by Marvin Del Cid, Sonny Figueroa
There is only one road in and out of San Juan La Noria. This community of 2,600 people, located 150 kilometres southeast of the Guatemalan capital, is almost completely engulfed by rows and rows of oil palms.
In the 1970s, when the village was founded, San Juan La Noria comprised around 20 houses. Its inhabitants worked in agriculture, including livestock and nearby banana farms.
Then, in the late 1980s, palm oil came to Guatemala’s Pacific slope, with growers making the switch from banana to oil palm as it was seen as more profitable. San Juan La Noria was chosen for its rich soil, wide open land and abundant water supply.


The plantations around the village all belong to the HAME Group, the largest palm oil producer in Guatemala. But the expansion of this highly profitable crop, used worldwide in everyday products from soap to ice cream and fuel, has not brought benefit to the inhabitants of the village.
Health problems
In half a century, San Juan La Noria has hardly developed. There are no drains, most of the houses are made of sheet metal and wood and the roads are unpaved. Many inhabitants still don’t have access to clean drinking water. According to data from the National Institute of Statistics, 29% live in poverty, and 8% in extreme poverty.
Houses without running water depend on two nearby rivers: Madre Vieja and La Noria. Their water is used to irrigate crops and wash clothes. There is no local waste treatment plant and many houses pipe their waste into the rivers. The resulting polluted waters are deemed unfit for human consumption, but many inhabitants of San Juan La Noria have no choice but to drink it as they cannot afford to buy purified water.
Community members claim that the oil palm plantations also pollute the river. While there are no local public records of this, nationally there are similar cases. In 2015, more than 150km of La Pasión River in Sayaxché, Petén, was affected by an overflow of palm oil mill effluent at the Palmas del Petén Reforestation Plant (Repsa), causing a mass fish die-off. An investigation by the United States Environmental Protection Agency (EPA) found that Repsa, another company operated by owners of the HAME Group, had dumped its polluted waste into the river.


A separate case of severe water pollution occurred in July 2019 on another local river, the San Román. As well as significantly compromising one of the communities’ main food sources, the contaminated water reportedly led to an increase in diseases, especially among children and the elderly.
The consumption of polluted water often results in gastrointestinal illnesses among the residents. But the village has no hospital or healthcare centre, so those who are sick must travel to the health post in Tiquisate, about 10km away.
“The mayor of Tiquisate, far from supporting us, mocks us when we go to the municipality to ask for development works – health, drinking water and asphalt for streets. Sometimes they listen to us, but they never do anything for the village. We are abandoned,” said Carlos Abán, president of San Juan La Noria’s Community Development Council.
But Julia Barrera, spokesperson for the Ministry of Public Health and Social Assistance, said that a temporary health post arrived to give basic consultations once a week.
“There is no health post, since when the services were defined in the community there was little population. Currently there is a temporary position made up of two people [a nursing assistant and health promoter] who attend once or twice a week,” Barrera said.
Community water diverted
As well as pollution, another frequent criticism of oil palm and other monoculture plantations is that they deplete water.
Three times a week, Elicita Guzmán washes her clothes in La Noria River, in temperatures sometimes in excess of 35C. Like more than half of the people in the village, she does not have running water.
“That is why we depend on this river. On several occasions it has dried up, because the little water in this river is going to the palm plantations,” she explained.
In front of Guzmán and her two young daughters, who were bathing with a bucket, stretch the endless rows of oil palms belonging to the HAME Group. The flow of the La Noria River was low and the plantation was being irrigated with river water.


Guzmán explained that when the river is not diverted to water the palms, the water reaches her waist. On this day, the flow barely reached her knees. “The river is dying when you start to water the palms,” she said.
The same happens with the nearby Río Madre Vieja, whose waters are also diverted to palm plantations. Women are already disproportionately impacted by oil palm, and having to find clean water to take care of their families places an additional heavy burden on them.
Supporting the community
Most men in San Juan La Noria work in the oil palm plantations. Those who do not, work on local banana and sugar cane farms. Abán says that the HAME Group does not have enough projects to support the local population.
“The palm farms do not support the community with projects. They (the HAME Group) tell us that we should be grateful because they give work to our people,” he said.

Twenty-year-old Edwin Juárez collects fruit in the palm plantations, receiving around 2,500 quetzals (US$330) a month. “They pay very little, but out of necessity I have to do it, because there is no other source of employment here,” he said.
In Guatemala, the minimum monthly wage for agricultural activities is 2,992 quetzals, about US$400. This means that palm companies do not comply with the minimum wage established by the Ministry of Labour.


The priests José Luis Paiz and Mario Jolón offer mass once a week at the church of San Juan La Noria. Both agree that the village is abandoned and that the nearby farms exploit the workers.
“One of the great problems of the community is that the municipality [of Tiquisate] does not care about development. The mayor’s office and the central government do not ensure that companies pay their neighbours a fair salary,” said Jolón.
The mayor of Tiquisate, Francisco Carias, did not respond to requests for an interview. His PR team sent data about the community, but it was not possible to ask specific questions about residents’ claims that San Juan La Noria had been abandoned.
Palm oil and sustainability
Palm oil, along with mining and hydroelectric projects, is among the fastest-growing industries in Guatemala. Its expansion has been linked to land grabs that displace indigenous communities, human rights abuses and the deaths of environmental activists. Deforestation to make way for oil palm plantations is making traditional subsistence farming harder, prompting increasing numbers to seek livelihoods elsewhere.
In 2018, seven-year-old Jakelin Caal died of fever in custody after trying to cross the southern border of the United States. Jakelin came from the Guatemalan village of Raxruha, where many farmers had sold their land to palm oil companies only to find that they could not earn enough working on the plantations. This has precipitated migration in search of wages to live off.
In the last 10 years, palm oil exports have represented about US$3 billion for the Guatemalan economy, according to the country’s central bank. Nearly all of the palm oil production is for export, primarily to Mexico, Spain and the Netherlands. Just 7% is left behind for local consumption.


The latest data from the Palm Grower Association of Guatemala (Grepalma) shows that, in 2019, 39% of oil palm plantations were certified by the International Sustainability and Carbon Certification (ISCC) and the Roundtable of Sustainable Palm Oil (RSPO), both global initiatives that certify palm oil as sustainable.
According to RSPO data, there are seven certified growers operating 10 certified palm oil mills nationally, producing 496,376 tonnes of certified palm oil over an area of 64,162 hectares of land. This makes Guatemala the leading producer of RSPO-certified palm oil in Latin America.
According to Francisco Naranjo, technical director of the RSPO, the HAME Group does not operate any certified plantations in the country. Research shows that the plantations around San Juan La Noria all send their oil palm fruit to the HAME Group’s Santa Rosa palm oil mill, which is certified by the RSPO and appears on the public mill lists of Nestlé, PepsiCo and Unilever. This discrepancy, with non-certified plantations sending oil to a certified mill, highlights weaknesses in the certification system, where non-certified oil is mixed with certified oil.
Palm oil production continues to expand in Guatemala. In the last 17 years, the planted area increased by more than 400% to 171,451 hectares and has turned the country into the world’s sixth-largest producer. Oil palm plantations are found in half of Guatemala’s 22 regional entities known as departments, the majority in the north.


Information from Grepalma indicates that there are 235 producers in the country, but 29 large groups dominate production – one of them being the HAME Group. The union said the industry generates more than 28,000 direct jobs and contributes 1.09% of the country’s gross domestic product (GDP).
HAME Group defends itself
HAME stands for Hugo Alberto Molina Espinoza, after the family that founded the firm. The family is one of the biggest landowners in the country and also owns the MEME Group (Milton Enrique Molina Espinoza). It has been involved in agribusiness since the 1950s, first with cotton, then banana and oil palm, and together has more than 45,000 hectares of oil palm planted across the departments of Petén, Escuintla, San Marcos and Quetzaltenango.
As well as the river contamination in 2015, the HAME Group and its associated companies have in recent years been targeted with lawsuits and accused of corruption. When asked about the way it treated the community of San Juan La Noria, HAME said it had a team that worked directly with the people there. In recent years various projects have been prioritised in the community, including repairing a bridge, road maintenance and rebuilding the school roof.
Some 340 people from San Juan La Noria work for companies belonging to the HAME Group.


“We comply with the provisions of the law and the Labour Code. All of the HAME Group companies guarantee the minimum wage to their collaborators. The Ministry of Labour has carried out inspections in the Group’s companies on several occasions, corroborating the correct payment of the minimum wage to all collaborators,” said Xiomara Lima, HAME’s corporate communication manager.
“In some jobs, a productivity wage is encouraged where workers can earn much more than the minimum. As a company, we comply with the payment of our taxes and within our operating plans we have resources assigned to social projects,” she said.
Lima dismissed claims that the firm gave little support to residents, saying that it acted responsibly towards Guatemalan families.
“We seek spaces for dialogue and joint prioritisation in order to establish long-term relationships,” added Lima.
Lima also denied that the HAME Group pollutes rivers, and said the company promoted the responsible use of water resources.
Original source: China Dialogue
TWITTER
FACEBOOK
WHATSAPP
PRINT
E-MAIL
TWITTER
FACEBOOK
WHATSAPP
E-MAIL