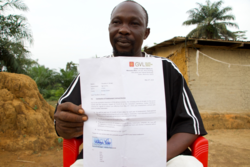 BUTAW, Sinoe County – Timothy Browne bought into the promises made by Singapore-owned palm oil company Golden Veroleum Liberia (GVL) when they came to this rural area of Sinoe County with offers of jobs and development for the people here in exchange for 2,600 hectares of land. Browne even hosted one of the major meetings that led to the Butaw-GVL memorandum of understanding (MoU). After the deal, he was happy. He got a job as a fieldworker with the company’s agronomy department, earning US$133 a month.


But in May last year, after three years employment, Browne was laid off along with 443 other workers. GVL said it had to fire the workers to grapple with the impacts of the coronavirus pandemic and a slump in the price of palm oil on the world market. Now Browne and the other workers here have no jobs. GVL has their land, they have no way to grow food to survive.
“GVL came here and told our people to give it land so it can provide citizens with jobs and development. Now, we have given GVL land and the jobs have been taken away from us,” Browne, 47, tells Frontpage Africa at his house made of mud walls and concrete. “I feel so bad today because this is the only job I was depending on to survive.”
The layoffs also affected Tartweh, Kabada, Wadabo and Tarjuowon in Sinoe, Garaway and Soroken in Grand Kru.
GVL signed a 65-year concession agreement with the Liberian government in 2010, leasing 220,000 hectares of land in Grand Kru, Maryland, River Cess, River Gee and Sinoe, the largest palm oil concession in the country. But people living in these areas were not aware their lands had been leased, sparking protests. In 2019, Cllr. Alfred Brownell, an environmental lawyer and advocate, won the Goldman Environmental Prize for his advocacy against the land-grab. Having lost ancestral land, including sacred sites and graveyards, the affected communities signed the MoUs with the company in exchange for jobs and development. Now that they have been sacked, they have lost their land and jobs.
“[GVL’s] action is against the MoU, which calls for the provision of jobs for the people,” says Timothy Swen, 34, who worked as a documentation clerk in GVL’s community affairs and social sustainability department. “I can tell you for sure that the relationship between GVL and the community here is not cordial. Our people are not happy with GVL.”


GVL denies any wrongdoing. Elvis Morris, GVL’s vice president for strategy and stakeholders, tells Frontpage Africa that the company has lost US$2.4 million due to the pandemic and had to take action. May last year – the same month as the layoffs – was the height of COVID-19 pandemic in Liberia. One hundred and forty-seven new cases and 11 deaths were recorded that month, bringing the total number of confirmed infections and death toll to 288 and 27, respectively, according to the National Public Health Institute of Liberia (NPHIL). During that time, as economic activity around the world ground to a halt, the price of palm oil on the world market fell by US$103.87 a ton or 16.34 percent, according to trading on a contract for difference (CFD) that tracks the benchmark market for the commodity. Morris says GVL is yet to recover.
“Our shipment has fallen from twice a month to once in a month’s time,” he says. He adds that the company had initially planned to make 1,200 workers redundant but cut the number down to 443 after the government’s intervention.
Layoffs are biting
Of the 433 workers that were laid off, 80 came from Butaw, 125 in Tarjuowon, 81 in Kpanyan, 54 in Wedabo, 34 in Garaway, 24 in Soroken, 16 in Kabada and 28 in Tartweh.

Frustration and desperation over the layoffs is rife in these areas.


“I am feeling very bad at the moment because there’s no money for me to take
care of my children, I am barely surviving on handouts,” says Sophiel Wesseh, a 61-year-old mother of five in Tartweh, who worked as a weeder. “I am just hoping and praying that some kind of solution would be derived to get something to support my family.”


But the redundancies are not the only issue. GVL has failed to live up to employment terms in MoUs it signed with the communities. Between 2015 and 2017, GVL signed MoUs with Butaw, Tartweh and Tarjuowon for over 28,000 hectares of land, 2,600 hectares in Butaw, 7,000 Tartweh and 19,000 hectares in Tarjuowon. The MoUs mandate GVL to employ one person per six hectares. That has never been done. In Butaw, for instance, it has hired less than half of the number of residents it agreed to employ.
These violations have not gone unnoticed on the international stage. In April 2017, a report by the Roundtable on Sustainable Palm Oil (RSPO)—the global watchdog for the oil palm sector—found GVL violated 16 MoUs it signed with communities between 2013 and 2015. This is a violation of the Roundtable on Sustainable Oil Palm (RSPO), the global watchdog of the oil palm sector. GVL’s concession mandates it to follow the RSPO’s principles, the only concession in Liberia that has that clause. It is a member of the certification scheme through its parent company Golden Agri Resources (GAR), the world’s second-largest palm oil company. The RSPO later reprimanded the company for land-grab a year after the report and ordered it to negotiate with the communities on employment opportunities and other issues. GVL would pull out of the RSPO only to reenter shortly after.
“The problem is that most of the concessions in these forest communities are engaging the people into agreements that they are not abiding by. This is the problem here,” says James Otto, coordinator for community right and corporate governance at the Sustainable Development Institute (SDI), in an interview at the nongovernmental organization’s office in Duarzon, Margibi County. “I think we need to change the way we carry on investment in these settlements. Large concessions are not working for the people and hence, we need to focus on a small, private venture that would be more effective.”
‘War’
GVL’s redundancy action has also triggered outrage across affected communities in Sinoe and even talk of violence.
“We gave our land for GVL to provide jobs for our children to benefit. Now, unfortunately, the company is not living up to its promises,”said Peter Kun, paramount chief of Lower Tartweh Chiefdom, Kpanyan District. “If one is not strong to withstand the temptation, these are the things that can bring war.”


GVL and the communities have clashed before. In May 2015, a riot over employment broke out between the company and the communities, leaving one person dead, several wounded and US$736,509 properties destroyed. Browne and other townspeople fled the town for a year.  Four months after the riot, the company laid off 330 employees.
Back in Butaw, things are getting harder for Browne and his family. He has spent US$524.27 redundancy package he received. The Decent Work Act, Liberia’s labor law, requires a company to rehire employees it laid off once the reason for the layoffs no longer exists. But Browne does not thing that is going to happen.

“I am not sure GVL will call me back on job because the company [blacklisted] me as one of the few workers who was causing trouble for it,” he tells me before his part-concrete-part-mudbrick house in a neighborhood called Panyonnoh. “If I am called back, that will be a miracle for me to see or else I will just have to leave the rest with God.” GVL denies it has blacklisted him.