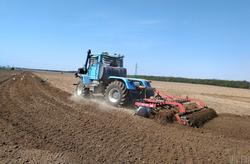 The farmland market is to be launched from July 1 (Photo: UNIAN/Volodymyr Hontar)
UNIAN | 24 May 2021


Zelensky enacts law to launch farmland market in Ukraine
Ukrainian President Volodymyr Zelensky has enacted a law on deregulation of land relations.
He signed respective bill No. 2194 into law at the Ukraine 30. Land Forum.
The president says this is a bill that is key to the farmland market, as it is designed to launch it from July 1, 2021.
According to Zelensky, bill No. 2194, which is called the Land Constitution, fundamentally changes the land management of Ukraine.
"This is a law which deprives a cabinet official of the function of registering the right to land, which he has never even seen in his life. Which finally returns to communities the right to dispose of their land. A law that clearly states that only Ukrainians can buy and sell land. The law, which I am happy to sign here and now," Zelensky said.
Farmland market launch in Ukraine
On November 14, 2019, a bill on the lease and sale of state-owned and municipal land via e-auctions (No. 2195) passed its first reading in parliament.
Ukrainian agribusinesses urged lawmakers to back that bill.

On April 28, 2021, the Verkhovna Rada adopted a comprehensive bill on deregulation in the field of land relations.

Bill No. 2194 provides for the transfer of state-owned land outside villages and towns (except for land that the state needs to perform its functions) into municipal ownership of village and town councils or territorial communities. The latter are also empowered to change the designated purpose of privately owned plots of land.

In addition, it is proposed that the powers of the State Service for Geodesy, Cartography, and Cadastre were revised.

On April 28, 2020, President Volodymyr Zelensky signed a bill on amendments into law to launch the farmland market in Ukraine from July 1, 2021.

The law foresees gradual land reform: from July 1, 2021, citizens of Ukraine will be able to buy farmland plots capped at 100 hectares. At the second stage, i.e. from January 1, 2024, the cap will be raised to 10,000 hectares, while legal entities will also be allowed to acquire land plots.

On May 13, 2021, it was reported the Constitutional Court of Ukraine on June 3, 2021, would start considering a motion filed by a number of lawmakers challenging the law on farmland turnover.

On May 18, 2021, the Verkhovna Rada adopted a draft law on the sale of land under new rules.

On May 19, 2021, lawmakers managed to unblock the signing of the law on deregulation of land relations.