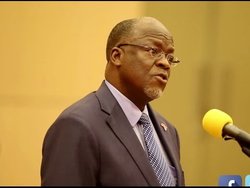 
President John Magufuli has smelt a rat in the distribution of 5,975 hectares of land repossessed from Kapunga and Mbarali rice farms and directed Mbeya regional authorities to submit the names of all beneficiaries to his office. The land in question was meant for distribution to villagers in the area but President Magufuli suspected that it could have landed in wrong hands.

“The land was meant for distribution to villagers but there is a likelihood that it was either given back to the former investors or other new investors secretly. I want the names of all people who were given the land,” he directed.

Addressing a public rally at Barafu Grounds in Rujewa, Mbarali District, Dr Magufuli also directed district authorities in the area to take actions against middlemen who local residents accuse of inflating rental fees for paddy farms from 295,000/- to over 600,000/-.

“The two companies agreed to surrender the land after verification by the government found out that the investors were occupying more land than what was indicated on their title deeds. It was thus decided that the reclaimed land should be distributed to the villagers,” he explained. Mr Lukuvi explained further that follow-up verification by the government found that even after Kapunga agreed to return the land, there were still 110 homesteads and one primary school within the area privatised to the investor.

“We will soon engage the investor on the possibility of releasing the land to the villagers within Kapunga estates,” he asserted. Dr Magufuli was seemingly irked that some of the villagers in Mbarali had in the past been given portions of land by the government free of charge but they later sold it to other people. “The very people who were given the pieces of land and sold it are now becoming tenants in the land JPM senses foul play in land deal Minister tells Parliament water access on the rise they sold. I am told that one former cabinet minister is among people with an area at Kapunga,” Dr Magufuli revealed.

The First Citizen also warned against reckless diversion of water to paddy farms from tributaries emptying waters to the Great Ruaha River which is vital for wildlife conservation and generation of power. In another development, Dr Magufuli said the fate of 33 villages in reserved areas in Mbarali District, which were on the verge of being evicted, are now in the hands of the Cabinet. The villages are home to over 40,000 people.

“The cabinet will deliberate the fate of the villagers on whether they should be evicted or allowed to remain. Wisdom will prevail since these villages have established themselves by putting in place social services such as schools,” he stated. Dr Magufuli warned that there will be no mercy for residents in Machimbo village who were given a total of 800m/- in compensation but have not vacated the areas, stressing: “These people will be evicted since they were already paid.”

According to Minister Lukuvi, a commission formed by eight ministers to find solutions to land conflicts in the country found out that 33 out of 102 villages in Mbarali District were within boundaries of reserved areas. Mr Lukuvi said after the countrywide tour by the ministerial commission, Mbarali District was leading with high numbers of human settlements in reserved areas.