Liberia: 'We don't want to threaten anybody' 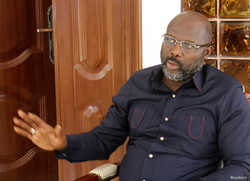 
Liberia: 'We don't want to threaten anybody'
By Othello B. Garblah
Civil Compound#3, Grand Bassa County-Responding to an appeal from Grand Bassa County Electorial District #4 Representative Vincent Willie to rectify the current Liberia Agriculture Company (LAC) concession agreement, President Weah said his administration don't want to threaten anybody.
"The companies, they are our partners, they are working with our people. We don't want to threaten anybody, because our people also need them," President Weah explained as he responded to citizens' requests.
"So, we need to sit on the table and find a common ground that will help our people that will help them. They are business people, they have their own interest and we too have our own interest," he stated.
Rep. Willie had informed the President during a citizen interaction at the Civil Compound #3 as part of his tour of Grand Bassa of the need to rectify the LAC agreement to make it mandatory for the company to pay royalty to the community in which it operates.
Rep. Willie asserted that LAC is the only company operating in the county that is not paying its portion of the Social Corporate Responsibility fund by law to the county and the district in which it operates.
Rep. Willie: "This old age LAC Concession Agreement is something resting upon you and I because I do not want to remove myself from there. Mr. President, as we speak LAC only work with us at their will. (But) when their agreement is reviewed their contribution to the community will be mandatory."
"Mr. President since 1959, there are poor housing facilities, safe drinking water is a problem. Pit latrine is a problem. While, we are pushing them to make some frantic effort, Mr. President we are also appealing to you," Rep. Willie noted.
But President Weah explained that it is important that others did not take their responsibilities and jurisdictions and pass it on to others, suggesting that the power to rectify an agreement rests with the Legislature.
Weah: "I know that the LAC Concession Agreement he asked me to rectify, but I think it is an oversight and I want to correct it. Sir with all due respect, my office cannot rectify anything. It comes from the Parliament (Legislature) to rectify everything-even us we have to go to them.
So, I will be there to listen, once you go back to convince your colleagues, I will be waiting in my Executive to make sure that things are right. Let us work together in the interest of our people."