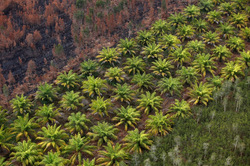 by Bobby Jordan
The South African Government Employees Pension Fund (GEPF) is invested in a Congolese palm oil business linked to past human rights abuses and land expropriation.
The Public Investment Corporation (PIC) has confirmed that pension funds are being indirectly invested in Plantations et Huileries du Congo (PHC). The funds are ploughed in via a US investment company, Kuramo Capital Management, PHC’s majority stakeholder. PHC’s previous owners include British multinational consumer goods company Unilever and Canadian company Feronia. Kuramo acquired a majority stake in PHC late last year.
PHC’s alleged human rights abuses are detailed in a report released last month by US think-tank the Oakland Institute. In a press release published two weeks ago, the institute drew attention to the report’s broad findings and themes, which include a list of key investors in the PHC’s DRC business.
Historical abuses detailed in the Oakland report include:
• Congolese communities affected by the palm oil business were forcibly displaced from “over 100,000 hectares of foreign controlled oil palm plantations established on their ancestral land”.
• “The dispossession from ancestral land crippled livelihoods, as poverty and hunger became widespread.”
• A 2019 Human Rights Watch report detailed how Feronia had abused the rights of local communities. These abuses included “abusive employment practices that kept workers in extreme poverty — including unpaid wages, exposing workers to dangerous pesticides, and routinely dumping untreated industrial waste, which contaminated a major supply of local drinking water, amongst others”.
• Company security staff “forcefully repressed opposition through murder, unlawful detention, beatings and torture”.
The Oakland Institute report says the PIC committed $20m (about R291m) to the Kuramo Africa Opportunity Fund II in June 2016. “As of 2018, PIC had invested just over $12.6m (about R183m) of this total into the fund,” it reads.
“GEPF made its first investment in Kuramo ... in 2017, committing $6,529,000 (about R94,5m). By 2020, GEPF’s investment in Kuramo ... was valued at $15,778,000.54 (about R228m).”
Report author Andy Currier said several investors in PHC “claim to promote socially conscious and environmentally sustainable investments, [but] they have turned a blind eye to the legacy of abuses in the PHC concessions”.
Kuramo hit back in a statement on its website, insisting its involvement was partly aimed at promoting local economic development. “Environment, social and governance (ESG) principles are embedded in all our investments, and we are committed to ensuring that all our investments achieve success in a responsible manner,” said chief investment officer Walé Adeosun.


The PIC said it was in touch with Kuramo regarding the Oakland Institute report. “The PIC takes ESG [environmental, social and governance] issues in investee companies seriously. The recent allegations of human rights abuse in the Democratic Republic of Congo [DRC] is not any different,” said spokesperson Matau Molapo.
“Kuramo has indicated it was never given an opportunity to respond to the content of the report before it was made public and it intends to respond,” Molapo said.
The PIC’s investment policy commits the organisation to consider issues such as conflict and working conditions, two key matters raised in the Oakland report on PHC, which was founded in 1911 and covers more than 100,000ha.
Kuramo confirmed that it had taken control of PHC last November and had since replaced managers in Toronto and London with “a fully indigenous Congolese team that reflects the communities where it operates”.
“For the first time in PHC’s history, the design of the policies and procedures that will ensure the company’s success will be in the hands of locals,” it said.
However, SA’s African Centre for Biodiversity (ACB), an environmental watchdog, this week said the South African government’s involvement in PHC was highly inappropriate: “The bottom line here is that GEPF has invested the money of South African workers to entrench dispossession of peoples’ territories and colonial patterns of land ownership and power in the DRC,” said ACB’s executive director Mariam Mayet.
In a statement to Sunday Times Daily, PHC said it was willing to engage its critics regarding perceived wrongdoings: “Whilst PHC may not always agree with its critics, it respects their right to hold the company to account and is committed to addressing and resolving areas where genuine grievances occur.”
“Whilst PHC does not claim that things are perfect, and recognises that a great deal of work is yet to be done, it feels it is deeply regrettable that there are those who, for whatever motives, seem determined to undermine the positive progress being made by the company through the perpetuation of misleading, exaggerated, and/or factually inaccurate information and allegations.
“The company also does not believe that the views held by a small minority are representative of those held by the vast majority of employees and local communities living in and around its operations, who see PHC’s presence and ongoing survival as both positive and of vital importance,” the statement said.
The company also said it did not own the land on which it operates, saying that it "leases it from the national government through more than 200 fixed-term, renewable land titles".
"Most of the company’s titles have been in place for more than 100 years and renewed a number of times. PHC strictly follows the legal process for renewing these titles, which is extensive and includes verification by government land surveyors and obtaining the necessary government permissions, which vary by province,” PHC said.