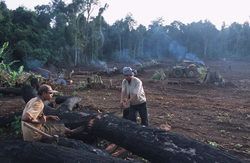 Farm workers cut a tree in the Cardamom Mountain rainforest in Cambodia in 2002. Photo: Peter Charlesworth/LightRocket via Getty Images

Five years ago, the ICC’s prosecutor said she would consider environmental crimes. Now, environmentalists and human rights activists want her to deliver.

Three leading climate and human rights nonprofits have asked the prosecutor at the International Criminal Court in the Hague to pursue rampant “land grabbing” by the government of Cambodia and its commerce partners as a crime against humanity under the court’s jurisdiction.

In an open letter to Prosecutor Fatou Bensouda on Tuesday, Global Witness, the International Federation for Human Rights (FIDH) and Climate Counsel said that, since 2002, at least 830,000 Cambodians have been affected, many illegally forced off their land, by the government and various corporations involved in timber and other resource extraction activities.

“The Cambodia situation offers a unique opportunity for the ICC to engage with the single greatest threat facing humankind—the climate and environmental emergency,” the letter said. “In many countries around the world, land grabbing is the harbinger for illegal resource exploitation, persecution of indigenous people, and environmental destruction.”

The letter was endorsed by the United Nations Working Group on the use of mercenaries and by over 50 lawyers and civil society organizations.

Fatou promised a decision last month in a speech before the Institute of International and European Affairs. If she takes the case, it would be the first time that the court investigates alleged crimes against humanity that are so directly linked to environmental destruction.The ICC has 123 member nations, but not the United States, and jurisdiction over crimes against humanity, genocide, war crimes and crimes of aggression.

The Cambodian government did not immediately respond to multiple requests for comment, but previously denied the allegations in other news reports, saying they are politically motivated.

Land grabs have led to large-scale deforestation and pollution across Cambodia, said Richard J. Rogers, the attorney who first filed the complaint with the ICC in 2014. The case has sat dormant ever since. But Fatou said in a February speech that she would issue a decision on whether to open a formal investigation into the allegations before June.

Advocates see the matter as a test case for whether the court will link instances of environmental destruction, illegal land takings and the illegal exploitation of natural resources to crimes against humanity.

“I think this will be a very important case for the ICC prosecution because it would show they are addressing the most pressing issue that’s facing mankind, which is the environmental destruction crisis,” Rogers said.

Cambodia’s lush rainforests are home to rare and threatened species like the pangolin, Asian elephants and clouded leopards, and play an important role in the livelihoods and spiritual practices of the more than 20 indigenous groups that live there.

From 2001 to 2018, the Southeast Asian country lost nearly a quarter of its tree cover, an area nearly the size of New Jersey, according to a report by Global Forest Watch that used satellite data from the University of Maryland.

The data shows that deforestation in the country has accelerated significantly since 2002, when senior members of the Cambodian government, its security forces and government-connected business leaders allegedly began a campaign of illegal land grabs from both public and privately owned properties.

After seizing land, the government often granted long-term leases, called economic land concessions, to companies from a variety of countries for agriculture, mining and other development projects. The government has defended the concessions as part of the country’s plan to develop its economy, but the benefits have accrued mainly to the country’s ruling class, according to the complaint.

Although the country’s economy grew at an average rate of 8 percent between 1998 and 2018, its GDP per capita was about $1,600, and access to education and other public services is lacking, the World Bank said.

Alley said concessions granted in forests are particularly lucrative because grantees make money from selling hardwoods as well as from the subsequent development of the land.

“Biodiversity is affected, there are carbon emissions from deforestation itself, and then there are… impacts like the usage of large amounts of industrial fertilizers, pesticides and dumping into rivers,” he said.

Land grabs have also led to significant human suffering, particularly for the country’s poor and indigenous populations who have been uprooted from their homes with little to no notice and placed in dismal relocation sites.

The complaint highlights over 100 allegations of forced evictions, murders, violence and illegal imprisonment of land activists. Despite making up less than 1.5 percent of Cambodia’s population, indigenous groups are about 10 times more likely to be victims of land grabbing compared to other Cambodians, it said.

Alex Gonzalez-Davidson, a Spanish activist, has documented the violence and environmental devastation through his organization Mother Nature Cambodia.

He was arrested and deported in 2015 in connection with his advocacy work but continues to operate from outside the country. Last fall, three other Mother Nature Cambodia activists were arrested and charged with incitement. Their crime: reporting on government plans to fill in a portion of Boeung Tamok Lake to build a military base, he said.

Gonzalez-Davidson, who first came to Cambodia as an English teacher in 2001, said he felt compelled to document the toll deforestation and other forms of environmental destruction have taken on local populations after a 2010 visit to the country’s eastern highlands, which is known for its beautiful waterfalls, wildlife and thickly forested hills.

There, he said he met a Pnong woman whose entire community had been forced off their ancestral lands because the forested area where they lived was part of a government land concession. The woman had refused to leave, her hut the only remaining structure left standing, he said. “The entire area around her home had been cleared of trees,” he said. “That isn’t just forest, that is where your father, your grandparents, your ancestors are buried.”

Much of Cambodia’s poor population, including subsistence farmers, depend on the country’s natural resources for their subsistence. Forced evictions move them away from their source of income and relocation sites are typically far from areas of economic activity, leaving them few job opportunities, according to the complaint.

The evictees of the An Dong relocation site, according to one observer cited in the complaint, had become “ghost people, with no right to vote, no health care, and who suffer from malnutrition and are more prone to illnesses such as dengue fever.”

“People’s livelihood has just been decimated. It’s not just in the destruction of the environment, which causes so much pain to the local community, so much economic loss, but also so much cultural loss,” Gonzalez-Davidson said. “Cambodia is a country that has an incredible attachment to nature.”
Original source: Inside Climate News
TWITTER
FACEBOOK
WHATSAPP
PRINT
E-MAIL
TWITTER
FACEBOOK
WHATSAPP
E-MAIL