Food estate projects must not contribute to deforestation: experts


Food estate projects must not contribute to deforestation: experts 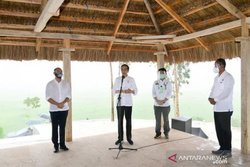 While it is currently spread over 30 thousand hectares of land, the size of the food estate will be extended over the next two years.

Now, the food estate project has been expanded to several other regions such as North Sumatra, East Nusa Tenggara (NTT), South Sumatra, Papua, and Riau.

During his visit, Widodo said he is optimistic the food estate will encourage rice farmers in Central Sumba to harvest rice twice a year, and corn and soybean once a year.

"As per data I have received, 34 percent of the residents in Central Sumba live in poverty and farmers harvest rice only once a year. We want them to harvest rice twice a year and corn or soybean once a year," Widodo said.

To scale up the irrigation system for farming, the government has built a number of reservoirs and dams in NTT, an arid province that often bears the brunt of water shortages.

Earlier, on February 11, 2021, Coordinating Minister for Maritime Affairs and Investment, Luhut Binsar Pandjaitan, visited a Herbal and Horticultural Science and Technology Park (TSTH2), which is currently being developed and will be part of a two thousand-ha food estate project in Pollung district, North Sumatra.

"Indonesia has 30 thousand herbal species, therefore the President is aiming for a world-class herbal research center (here), which we are currently developing together with the Agency for the Assessment and Application of Technology (BPPT) and five universities led by IT Del," the minister said.

Supporting facilities for TSTH2 will also be built in the area and will include laboratories, collection gardens, hatcheries and research centers, silvopastures, natural tourism, artificial tourism, offices, and accommodation for researchers as well as guest houses.

"I hope we can plant good and superior seeds here, so that we can be proud to say these seeds are from Pollung. For this reason, it is hoped that the community and the government can cooperate with each other, and most importantly work with the heart," the minister remarked.

In Riau province, about 30 thousand hectares have been allocated for a food estate project for planting rice and corn, among other things.

"The Riau provincial government has filed an application with the Agriculture Minister and allotted 30 thousand hectares of land in the hope of being able to develop a new food estate," Riau Governor Syamsuar said on March 5, 2021.

The government came up with the idea of developing a three-year food estate project following a warning by the Food and Agriculture Organization (FAO) that the COVID-19 pandemic is posing a serious threat to food security and nutrition. It has also urged governments and other stakeholders to build more resilient food systems.

"The ministry is implementing sustainable food estate development and management to increase food security while supporting national economic recovery by providing jobs for people affected by the COVID-19 pandemic," minister Hadimuljono said in a statement issued on February 28, 2021.

He cited a number of challenges to the development of food estates, including water management, community economy, the environment, institutions, and financing.

The location earmarked for the development of each food estate comes with different characters and challenges, he pointed out. In Central Kalimantan, the government is revitalizing the former site of a one-million hectare peatland project (PLG), which is not a peatland, but rather alluvial land covering an area of 165 thousand hectares, the minister informed

"It all requires very detailed and accurate water management. Here, we prioritize drainage management so that the land is not inundated and (crops) can be planted," he explained.

Indeed, the environmental aspect could become a challenge in opening up more farming areas to support the food estate project, which might require millions of hectares of land within three years.

Therefore, Prof. Rizaldi Boer, a climate change mitigation expert from Bogor Agriculture University (IPB), has urged the government to avoid deforestation in opening up new farming areas and focus on unproductive and neglected land for the food estate project.

Forests contribute significantly to gas emission reduction. Hence, the project must avoid deforestation so that it does not impact the government's target of 29 percent reduction in gas emissions through its own efforts, or 41 percent with international support, by 2030, Boer said.

There must be no forest conversion for the food estate project, because currently Indonesia has 30,107,242 hectares of land categorized as unproductive and neglected, including those located in the areas of forest concessions and other usage (APL), he said during a discussion on the impact of the food estate project on forest and peatland areas on February 24, 2021.

"Unused and unproductive land areas are very vast, so why do we have to look for (new land for farming) in forests?" asked Prof. Boer, who is also executive director of the Center for Climate Risk and Opportunity Management in Southeast Asia and Pacific (CCROM-SEAP) at IPB University.

During the discussion, Madani Berkelanjutan Foundation, an environmental NGO, revealed the results of its study which has found that 92 percent of the food estate's area of interest (AOI) spanning 3.69 million hectares in four provinces — Central Kalimantan, North Sumatra, South Sumatra, and Papua — is inside forested areas.

For the sake of consistency in its commitment to greenhouse gas emission cuts, the government must avoid forest and peatland conversions, she said.

A similar concern was expressed by another NGO, Independent Forestry Monitoring Network (JPIK), in Tulungagung, East Java on March 9, 2021.

Muhammad Ichwan, an activist from JPIK, estimated that the current threat of the rate of deforestation would continue to increase, following the issuance of Environmental Affairs and Forestry Minister's Regulation, Permen-LHK No. 24 of 2020 on Food Estates, which will open up space for massive land clearing, including in protected forests, thereby leading to an estimated potential loss of one million cubic meters of logs.

Meanwhile, the directorate general of forestry planning and environmental management under the Ministry of Environmental Affairs and Forestry recently claimed that deforestation in Indonesia decreased by 75.03 percent during the 2019-2020 period.