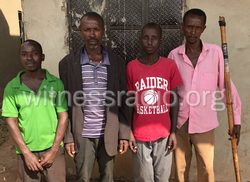 The four have since been charged with criminal trespass, a charge which carries one (1) year imprisonment on conviction.
Sipiriano Baluma, Byaruhanga John, Aliganyira Francis, and Karangwa Frank are residents of Kisalanda – Jerusalem village, Kitwala sub-county in Kiryandongo district who could not escape the raid mounted by armed anti-riot police, and armed company workers with bows and arrows.
After a 6 day search for the missing villagers, on March, 23rd, 2021, Witness Radio – Uganda lawyers received information from relatives that the four (4) had been taken to Kiryandongo Central Police Station in one of the evenings.
“It’s true that when we visited Kiryandongo district police, we were able to find all the four villagers including Karangwa Frank, who’s a person with a disability. They were in good health condition. And, when we demanded their unconditional release, police instead released them on a police bond and we have them with us” Said Joan Bulyerali, one of the Witness Radio – Uganda lawyers on Tuesday, the 23rd, March 2021.
The abduction of villagers is part of the wider use of violence orchestrated to them by Kiryandongo police, which has decided to work for investors including Great Seasons SMC Limited and it’s linked to the community’s resistance to a land grab.
Great Seasons SMC Limited, owned by Sudan’s investor based in Dubai is part of a group of three multinationals including Kiryandongo Sugar Limited, owned by an Indian family (RAI Dynasty), and Agilis Partners Limited which is owned by American twin brothers (Benjamin Prinz and Phillip Prinz).
The multinationals since 2017 are evicting over 35000 natives off their land without any due processes or court order to give way for different agribusiness investment projects.
“All our fields are guarded by anti-riot police and armed company workers protecting company tractors that have entered into our gardens and plowing our crops and pulling down our natural trees. We cannot speak out, when you dare to, you will be beaten seriously and arrested,” Said Samuel Kyaligonza, a retired civil servant and a resident of Kisalanda.
The four members will report back for their bond on 29th March 2021.