(Note: those behind this project are the Ukrainian businessman and owner of KSG Agro, Sergiy Kasianov, and Swiss politician Filippo Lombardi through a joint venture called KS Genetics Switzerland)
Ukrainian plans for a breeding farm in Kazakhstan
Ukrainian pig company KSG Agro has announced plans to build a breeding complex for 50,000 pigs, at an investment cost of € 30 million, the company said in a statement late February.
The new production complex will contain a breeding unit, farm, and feed mill. As explained by Sergey Kasyanov, chairman of KSG Agro, the parties have begun working on the roadmap for the project.
Kasyanov said, “The project’s commercial potential is associated with the opportunity to export products, in particular, due to the geographical proximity to China and the absence of African Swine Fever outbreaks in Kazakhstan.”
KSG Аgro is one of the largest vertically integrated agricultural companies in Ukraine, focused primarily on pork and grain production. The holding’s shares are listed on the Warsaw Stock Exchange. KSG Agro is a member of the European Business Association.
Swiss support for pig farm plans
Support will be provided by the Swiss company KS Genetics Switzerland. At a meeting in Kazakhstan’s capital Almaty with the regional authorities, Ticino Filippo Lombardi, chairman of the Swiss delegation, said that the project’s ultimate goal is to provide local farmers with non-GMO pigs for guaranteed productivity.
Lombardi said, “We work with genetics, but inside nature, not outside it. These are natural genetics. We are ready to share our technologies in the livestock field with local farmers.”
Pork production in a Muslim country
Despite being predominantly a Muslim country, Kazakhstan has been increasing pork production in recent years. Since 2018, the domestic pork consumption has increased by 13%, according to estimations by the Kazakh Pig Farmers Association. Currently, it is believed that a third of the country’s population consumes pork.
Recently, speaking at a press conference, Boris Mitin, chairman of the Pig Farmers Association, complained that the state aid to the pig industry has shrunk from 2 billion tenges in 2018 (US$ 4.6 million) to 1 billion tenges in 2020 (US$ 2.3 million). Moreover, all payments were put to a halt in the 2nd half of 2020.
Mitin added that the state aid was one of the main reasons behind the production growth of the Kazakh pig industry.
Establishing pork exports from Kazakhstan
In 2019, the Kazakh Union of Pig Farmers announced plans to establish pork export of around 100,000 tonnes per year and double the domestic pork production. In terms of the pig industry development, Kazakhstan could adhere to the so-called “Indian model.” There, beef is shipped worldwide, even though the domestic population is not consuming beef on religious grounds. 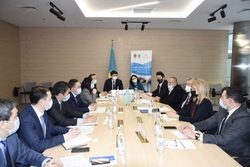 
Livestock complex to be built in Almaty region

In the Almaty region, it is planned to build a selection-hybrid livestock complex based on Swiss technologies with a design capacity of 50 thousand pigs per year and attracting about 20 million euros of investment funds. The issues of the implementation of this project were discussed at the meeting of the regional akim Amandyk Batalov with representatives of the Swiss-Ukrainian company "KS Genetics Switzerland SA".

Having greeted the official representatives, Amandyk Batalov briefly spoke about the features of the socio-economic development of the Almaty region, focusing on priority areas.

“Almaty region is an agricultural region. We specialize in the cultivation of sugar beets, corn, 95% of the republican volume of soybeans is grown in the region. The processing of crops has also been put on the rails. We have two large sugar factories. This year we will increase the sown area of ​​sugar beet to 16.3 thousand hectares, and sugar production to 55 thousand tons. We are also working on the development of the livestock sector, including in cooperation with transnational companies. We are planning to implement two large projects for the processing of meat fr om MRS and cattle in cooperation with German and American companies. We are always glad to cooperate. We need your technologies, including solid waste processing. This work is being carried out at a high level. I am glad that we met with you again and am ready to listen to your proposals on the construction of a livestock complex, ” A. Batalov said.

Thanking for the warm welcome, ex-chairman of the Council of Cantons of the Federal Assembly, President and shareholder of KS Genetics Switzerland Filippo Lombardi noted that it is good to remember the previous meeting at the Astana EXPO International Specialized Exhibition: “Last time a memorandum of cooperation was signed. It is gratifying that today's meeting has become his concrete continuation. We are implementing our project for the construction of a livestock complex together with our Ukrainian partners, using modern Swiss technologies. We work with genetics, but within nature, not outside it. This is natural genetics. We are ready to share with local producers our modern technologies in the field of animal husbandry,” noted F. Lombardi, and also said that the task of the complex is to produce purebred pigs without genetic manipulations, with guaranteed productivity, resistant to diseases.

Sergey Kasyanov, the chairman of the board of directors of KSG Agro, a shareholder of KS Genetics Switzerland, spoke in more details about the project. “At the first stage of the project, we plan to implement 25-30 million euros of investment. The livestock complex will include a reproducer, a farm, and a feed mill. Moreover, you have soybeans and corn in your region. We plan to finance local farmers to grow the volumes we need, and then process them on the spot. Now it is important for us to jointly determine the place of the future implementation of the project. The sites wh ere previously these kind of farms were located are also suitable for us. We plan to export finished products to China,” S. Kasyanov said.

Summing up the results of the meeting, Amandyk Batalov emphasized that all the necessary support will be provided: “From the moment we signed a memorandum within the framework of EXPO, we began to work together. The project you are talking about is a new production, which means jobs, tax revenues to the budget, and an increase in the export potential of the region. Swiss technology is highly regarded all over the world, so it is great that you share it with us. Within the framework of the Business Roadmap, we will be able to bring the necessary infrastructure to the enterprise. I suggest you build a logistics base on the territory of the FEZ "Khorgos - Eastern Gate" so that the sales market is as close as possible. Containers travel through the dry port to Europe in 10-12 days, to China - 3-4 days. It is very convenient, - A. Batalov summed up, having given instructions to accompany the project to his deputy S. Turdaliev, who is in charge of agriculture, investment, and entrepreneurship.

At the same time, during the meeting, the management of KAZAKH INVEST NC JSC presented measures of state support, as well as ready-made investment proposals in the field of the agro-industrial complex.

On the side note, today's meeting became a continuation of the business relations between the Almaty region and Switzerland, which began in 2017. Thus, within the framework of the International specialized exhibition "Astana EXPO-2017", a memorandum was signed between the Almaty region and the canton of Ticino in Switzerland to establish cooperation at the regional level. Further, in May 2018, delegations from the canton of Ticino, Switzerland, paid a working visit to the region to participate in a B2B business forum held in Taldykorgan, as well as to get acquainted with the existing renewable energy facilities in Kapshagai and the prospects for development in the region of green energy.

It should be noted that at the end of 2020, around 700 billion tenge of investments were attracted to the Almaty region. Today, the region's investment portfolio contains 546 projects with a total value of 5.4 trillion tenge with the creation of 44 thousand jobs. A significant contribution is made by 9 projects of transnational companies for a total investment of 250 billion tenge with the creation of 7.6 thousand jobs. Three of them have already been implemented (Mareven Food, Lukoil, Willo).