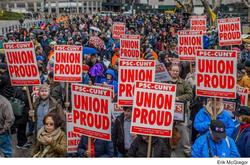 Stop TIAA’s corporate investment in land grabs that foster displacement and threaten biological and ecological destruction
The following resolution was adopted in March 2021 by the Professional Staff Congress, a union that represents 30,000 faculty and staff at the City University of New York and the CUNY Research Foundation

Resolution Title: Stop TIAA’s corporate investment in land grabs that foster displacement and threaten biological and ecological destruction. Submitted by: PSC- Environmental Justice Working Group.
Whereas, TIAA has invested billions of dollars, directly or through its subsidiaries, in land in Brazil, the US, and elsewhere, and has invested in agribusiness companies associated with deforestation, labor abuses, human-rights violations, and severe climate impacts; and
Whereas, the investments in grabbed land deprive independent family farmers of their land, leading to displacement, loss of ancient cultural and community ties, and exposure to disease-causing chemicals sprayed onto crops or otherwise applied; and
Whereas, much of this land is in Brazil where it has expanded industrial agriculture in the threatened ecosystem of the Cerrado region, contributing to loss of biodiversity, air and ground-water pollution, and increased greenhouse gas emissions associated with petrochemicals used, methods of monoculture agriculture, and deforestation; and
Whereas, a significant portion of the acquired lands was bought from known speculators who grabbed the land illegally and forced off the peasant occupants using tactics of intimidation and violence; and
Whereas, fraud, intentional deforestation, and the subsequent loss of productive soil are part and parcel of land grabbing; and
Whereas, concentrated agricultural landholdings typically produce export commodities rather than food for local consumption, under conditions that threaten the physical environment and encourage consumption of an unhealthy diet; and
Whereas, TIAA is also buying farmland in the United States, leading a trend of corporate and institutional land accumulation that threatens soil erosion, pollution, the future of family farming, especially for African American farmers, and access to locally-based healthy food distribution; and
Whereas, the Organization of Economic Cooperation and Development (OECD), the United Nations Environment Program, and the United Nations Guiding Principles on Business and Human Rights all call upon the financial sector to do its part in reducing climate emissions and respecting human rights; and
Whereas, TIAA falsely claims to be a leader in responsible investing and the inclusion of Environmental, Social and Governance (ESG) criteria in its investment decisions; and
Whereas, TIAA puts its clients' funds at risk by acquiring land from sellers that a Brazilian court has found to have illegally grabbed land; and
Whereas these investments expose TIAA and its beneficiaries-including faculty members with retirement investments-to a host of material financial risks including operational risk, market risk, regulatory risk, policy risk, reputational risk, and physical risks related to the unsustainable exploitation of ecosystems; and
Whereas, the PSC has been historically committed to the defense of human, civil and labor rights as well as the promotion of social justice, both at home and abroad; and
Whereas, a majority of PSC members have substantial investments in the TIAA family of funds, and recognize the responsibility that comes with such financial involvement;
THEREFORE BE IT RESOLVED, that the PSC, on behalf of its membership, call on TIAA and its corporate subsidiaries to halt investments in land and agribusiness, divest itself of any land already acquired; and
BE IT FURTHER RESOLVED, that the PSC call on TIAA, while still invested in land to be transparent and inform investors of the names of funds that contain grabbed land and the amount invested, so that members can choose funds that satisfy their ethical requirements; and
BE IT FURTHER RESOLVED, that the PSC educate its members on these issues of TIAA agricultural land grabs; and
BE IT FURTHER RESOLVED, that the PSC urge NYSUT and AFT affiliates with higher education members to support the cessation of TIAA in investing in agricultural land and agribusiness.
Sources:
• https://www.nytimes.com/2015/11/17/world/americas/tiaa-cref-us-investment-giant-accused-of-land-grabs-in-brazil.html
• https://www.grain.org/article/entries/5336-foreign-pension-funds-and-land-grabbing-in-brazil
• https://foe.org/publication/invested-exploitation-tiaas-ties-land-grabbing-deforestation/
• https://www.grain.org/en/article/6456-harvard-s-land-grabs-in-brazil-are-a-disaster-for-communities-and-a-warning-to-speculators ;
•  https://foe.org/news/groups-call-on-harvard-university-to-stop-land-grabs-as-new-report-exposes-harm-done-to-communities-in-brazil/
• https://www.bloomberg.com/news/articles/2020-12-17/u-s-pension-fund-tiaa-embroiled-in-brazil-land-purchase-probe?sref=5DzaVjJc