Blaise Mokwe, a 33-year old man, from the village YAKOTE, community of BOLESA, BOLINGA sector, Yahuma territory in the middle of the PHC/ Feronia/ KKM Lokutu plantations in the Province of Tshopo in the Democratic Republic of Congo, died on 21 February 2021 as a result of torture, assault and beatings, perpetrated by the security guards of PHC / Feronia / KKM in Yahuma/Basoko territory, at the Lokutu plantation site, Tshopo Province (DRC).

On 13 February 2021, local communities in the area of Lokutu, Tshopo Province, Dr Congo organised peaceful actions to protest the arrival of a delegation of investors organised by the oil palm plantation company Plantations et Huileries du Congo (PHC). The villagers were protesting against the failure of the company to provide them with any benefits after more than a 100 years of illegally occupying their lands and the recent takeover of the company by a private equity fund called Straight KKM without any involvement from the communities. Since 2013, PHC, until last year owned by the Canadian company Feronia Inc, has received over US$150 million in financing from the development banks of the UK, Belgium, France, Germany, the Netherlands, Spain and the US.

A peaceful protest was held at the airplane landing strip in Mwingi to greet the arrival of a delegation of the new owners of PHC/KKM. The new director of PHC and one of its new owners, the Congolese businessman Kalaa Mpinga, was not part of the delegation, which was composed of 3 Asian investors, a representative of PHC and a South African. The villagers then marched from the airfield to the office of PHC in Lokutu.

The next day, the delegation attempted to visit some of the affected communities (notably in Mindua). In some places they were confronted with roadblocks organized by the communities as a sign of discontent.

According to the information provided by numerous local sources, dozens of villagers from the communities of Mindua, Mwingi, Bolesa, and Mosite (all located in the vicinity of PHC's Lokutu plantations) suffered arbitrary arrests and/or physical violence. At the present time, it appears that 12 people are still being held in Yangambi prison (150 km from Lokutu and therefore far from their villages and from any support to assist them in asserting their rights).

One of those attacked by the company’s security guards died shortly after being badly beaten, tortured and detained. Blaise Mokwe, a 33-year old man engaged to be married, from the village YAKOTE, community of BOLESA, BOLINGA sector, Yahuma territory in the middle of the PHC/ Feronia/ KKM Lokutu plantations in the Province of Tshopo in the Democratic Republic of Congo, died on 21 February 2021 as a result of torture, assault and beatings, perpetrated by the security guards of PHC / Feronia / KKM in Yahuma/Basoko territory, at the Lokutu plantation site, Tshopo Province (DRC).

Here is a breakdown of the arrests and assaults that have occurred so far: 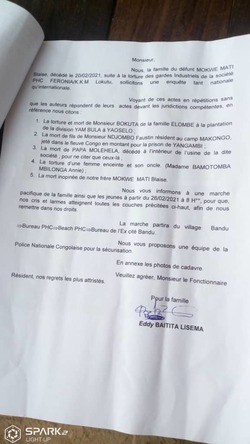 Request for authorisation for a peaceful protest in Lokutu to denounce the killing and violence committed by PHC against local villagers.


Increasing violence over the past months

According to community members, since the recent sale of PHC, and the hiring of Mr King Mpika as Security Estate Manager (head of security) of the PHC in Lokutu, the criminalisation of local protest has increased. According to Gilbert Lokombu Limela, President of the Civil Society of Basoko (Lokutu side), King Mpika’s security operations also include a detachment of around 50 police officers from Kisangani. Tensions have also been heightened because of the delay in a mediation process that was promised to the communities by the DEG-FMO-Proparco complaint mechanism over 2 years ago.

Mr King Mpika (who according to some sources is related to the new PHC owner Kalaa Mpinga) is said to have made death threats towards two of the detainees arrested on 13 February, before leaving Lokutu: Mr Christian Litikela and Chimita Alela.

He is said to have given the orders that led to the acts of repression and recent arrests. 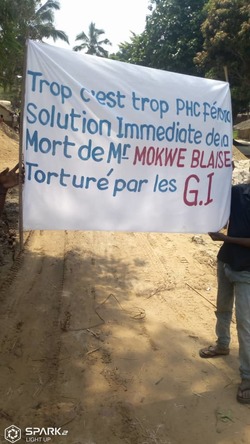 Villagers protesting the killing of Blaise Mokwe and other violence committed by security guards and police under the command of PHC, February 26, 2021


Circumstances of the arrests

According to local sources, the arrests at Mwingi were carried out by local police, at the request of PHC security. The security guards led or participated in the arrests.

In Mwinigi, three members of RIAO-DRC in Lokutu were arrested under a false pretext of inciting revolt, taking photos of the protest and providing interviews to journalists in which they explained the context of the Lokutu protests. Similar charges were made against the community leader who was arrested at the same time. Three of those arrested were badly beaten. One was released after a payment of 300,000 FC (US$150), while the three others were transferred to Yangambi prison

In the vicinity of Bolesa, the PHC security guards arrested 4 women and 4 men, which they then took to the police station in Lokutu. Several of those arrested were assaulted before they arrived at the police station. Some arrived handcuffed/tied. The eight villagers were taken to the holding cell in Lokutu and the four women were later released. Three of the men were transferred to Yangambi prison. One of those arrested and assaulted, Mr. Blaise Mokwe, was transfered to a hospital which could not care for him and he died on 21 February of his injuries at his home.

There are also reports that a young teacher from Mwingi, who is a local member of RIAO-RDC, was assaulted by PHC security guards while he was travelling to central Lokutu, without any reason given. According to local sources, the arrest was extremely violent. The teacher was eventually tortured, handcuffed and taken to Lokutu prison. He is reported to be in critical condition.

Following the violent incidents in the vicinity of Lokutu after the demonstration, further assaults and arrests were reportedly made in other villages, including Mindua. The majority of those arrested in Mindua were apprehended by PHC security guards on suspicion of stealing palm nuts and taken by the security guards to Lokutu police station. Sources indicate that five men were arrested, as well as one woman who is five months pregnant. The woman was allegedly beaten and raped and is now at risk of losing her baby. She is reported to have been transferred from the local police station in Lokutu to Yangambi prison.

Local sources also state that there were several cases of sexual assault and rape committed against women by PHC security guards in Mindua, Mwingi, Bolesa and Mosite during this wave of violence.

The coffin of Blaise Mokwe, sitting outside the offices of PHC, as act of protest by his family.

Blaise Mokwe, a 33-year old man engaged to be married, from the village of Yakote, was arrested on 15 February at his home near his village of Yakote. That day, he started his day by sweeping his yard in front of his house. As his broom was broken, he went to the plantation to look for a stick to repair his broom.

That's when he was arrested by the security guards. They accused Mr. Mokwe of "stealing palm nuts belonging to the plantation" and forced Mr. Mokwe to take them to his house to search the premises and find the "nuts". Following the search, they found no nuts or oil at Mr Mokwe's home. However, the security guards decided to take Mr Mokwe to the Lokutu police station. Considering this arbitrary arrest and in the absence of any offence, Mr Mokwe refused to follow them. The security guards then tried to take him by force to the Lokutu police station.

When Mr. Mokwe resisted, the security guards beat and kicked him and then took him by force, handcuffed, to the Lokutu police station (25 km away).

On arrival at the police station, the commander reportedly demanded that Mr Mokwe be immediately taken to hospital as his health was in a critical state. Unfortunately, at the hospital, due to a lack of medication, Mr Mokwe was unable to receive the necessary care. He therefore returned to his village in Yakote. He died on February 21, in Yakote/Mosite, of the injuries sustained when beaten by the PHC security guards.

In an act of protest and desperation, Mr Mokwe's family took his body to the Lokutu police station the next day to seek justice. But the Lokutu local police commander refused to allow the body to be taken to the police station because, according to him, the security guards of PHC were responsible for Mr Mokwe’s death, not the police. The body was then taken to the PHC workers' camp in Lokutu, where it remained during the day of February 22nd, in the presence of some relatives. 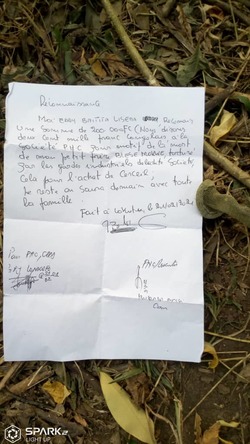 Receipt for the loan of US$100 provided by PHC towards the costs of Blaise Mokwe's funeral.

PHC made a contribution of 200,000 FC (US$100) to the funeral expenses of Mr Mokwe. Subsequently, PHC requested that an acknowledgement of debt be signed by Mr Mokwe's elder brother, committing him to reimburse PHC for the payment of the advance to cover funeral expenses. Subsequently, sources confirm that representatives of PHC acknowledged that Mr Mokwe's death was linked to the assault and beatings he suffered at the hands of its security guards.

This is understood to be what motivated the company to promise the family an additional indemnity of 500,000 FC (US$300) to cover the funeral expenses.

Mr. Mokwe was buried on 22 February at the end of the day.