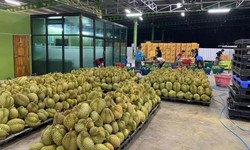 Laos reveals Chinese investor requests 20,000 - 30,000 rai (3,200-4,800 ha) of land concessions to grow durian and export to the China, It will affect to the future of Thailand for sure.
Foreign Trade Promotion office (Ambassador of Commerce) in Vientiane Lao People's Democratic Republic (Lao PDR) reported that Mrs. Kingkeo Chanthalangsy, Director of Borlikhamxai Agricultural Development and Promotion Co., Ltd. Lao PDR has a lot of competition. So we decided to do business to produce agricultural products in accordance with the guidelines of the promotion of the Lao PDR Party and Government, which emphasized on promoting sustainable agricultural production. To generate income for the people and the country to export to foreign countries, especially China.
In the first six months of 2020, China's durian imports reached US $ 1.6 billion. An increase of 73 percent from the same period of previous year. Most of them are imported from Thailand, Malaysia and the Philippines. In the future, it is expected that Lao PDR and Vietnam will also export durian to foreign countries. With China being the world's largest market. The reason for the growth of the durian export of Lao PDR is because the Lao PDR has free trade agreements (FTA) with many countries. By removing import duties/Tax from 16 countries such as China, Italy, New Zealand, Japan, India, etc.
However, the company already has the Chinese market. For durian and jackfruit varieties that are grown, they are imported from abroad, with some being planted. Expected to be able to export durian in the year 2024. At present, Lao PDR has an area to grow durian in Champasak Province which is a local durian and Monthong.  Currently, there are Chinese investors requesting land concessions from the government to plant durian around 20,000 - 30,000 rai.
Currently, Foreign Trade Promotion office stated that the Lao PDR started to do more agriculture. To reduce imports and in addition, the government wants to support the worker turn to work in the country. Lao PDR also has a large number of areas that can do agriculture. Therefore, it is an attractive for foreign investors to invest, especially the Chinese investor who request for concessions. Which in the future may affect to agricultural exports from Thailand, including maize, bananas, durian, agricultural vegetables.