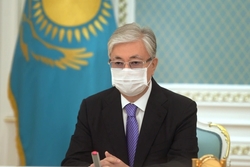 Kazakhstan, a major producer of grains, oilseeds and meat, is seeking to end a dispute that has prompted protests.

Kazakhstan will permanently ban foreigners from owning or renting farmland in the vast Central Asian nation, President Kassym-Jomart Tokayev has said, ending a lengthy dispute that once prompted anti-government protests.

Kazakhstan is a major producer of grains, oilseeds and meat in the former Soviet region sandwiched between China and Russia. Five years ago its authorities decided to attract foreign investment into agriculture by opening up the farmland market.

But, unusually for the tightly controlled nation of 19 million people, the plan was met with street protests where demonstrators expressed concerns that giant neighbour China would eventually snap up all the fields and pastures.

The government then shelved the plan until this year. On Thursday, Tokayev said the foreign ownership ban would remain in place.

“The land (ownership) issue has always been very important to our people. It is a cornerstone and a sacred symbol of our statehood,” Tokayev said at a meeting with an advisory council.

“I order that the sale and leasing of agricultural land to foreigners and foreign legal entities be forbidden. This also includes legal entities with foreign shareholders.”

China is Kazakhstan’s key trade partner, creditor and investor, but its growing clout has prompted a rise in anti-Beijing sentiment among locals, which has also been fuelled by reports of a crackdown on ethnic Kazakhs in China’s Xinjiang province as part of a “de-radicalisation” campaign.