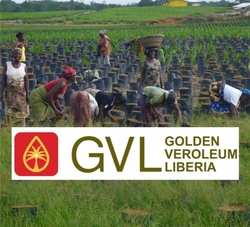 Monrovia, Amsterdam, Washington D.C. –  The High Carbon Stock Approach (HCSA), an agribusiness industry sustainability body, has confirmed longstanding allegations that Golden Veroleum Liberia, the Liberian investee of palm oil giant Golden Agri-Resources, committed widespread deforestation over a thousand hectares of forest, including endangered species habitat and important wetlands. In a comprehensive report published this month, the company was also found to have violated the land and cultural rights of local communities, including the right to free prior and informed consent and social requirements on basic needs and grievance and remedy.

Golden Veroleum Liberia (GVL), a venture controlled by the Singapore-listed conglomerate Golden Agri Resources (GAR), the world’s second largest palm oil company, was subject to grievances filed in July 2018 by Friends of the Earth groups from Liberia (Sustainable Development Institute), the Netherlands (Milieudefensie) and the United States (FoE US). The grievance was filed after field research in a sample of GVL’s palm oil plantations revealed that forests had been cleared. The plantation is situated on lands customarily owned by local communities that include endangered chimpanzee and pygmy hippopotamus habitats and one of the last strongholds of the threatened Upper Guinean Rainforest.

The HCSA is a voluntary standard that agribusiness companies use to assess their impacts on forests. The HCSA is used by sustainability certification bodies such as the Roundtable on Sustainable Palm Oil (RSPO) and the Forest Stewardship Council (FSC). The recent findings on GAR/GVL are the result of the first external complaint concluded by the HCSA Executive Committee under its grievance mechanism.

The HCSA Executive Committee decided that GAR/GVL needs to remediate the deforestation. The companies must deliver a time-bound action plan within three months to comply with the HCSA members code of conduct. GVL should halt plantation development until all conflicts with local communities are resolved and new forest, biodiversity and land assessments are validated. The findings also require the companies to conduct a human rights assessment and adopt a “Zero Retaliation” policy to guard against further human rights violations against local workers and communities.

In 2018 the Liberian legislature passed the landmark Land Rights Act which recognizes the customary land rights of communities to own, manage, and govern their traditional lands and forests.

James Otto from Sustainable Development Institute Liberia reacted to the HCSA decision: “There is no denying anymore that GAR and GVL engaged in harmful practices resulting in deforestation and the violation of communities’ rights. These companies must now restore the forests and provide redress to affected communities. They should ensure that communities are leading forest restoration and management over their customary lands. The Government of Liberia should urgently take up its role to enforce concession agreements and national policies to avoid deforestation and rights violations in all industrial monoculture plantations in Liberia.”

The HCSA’s conclusions are not legally binding and the only sanction facing the company is potential suspension from membership in the HCSA group. However, GAR and GVL’s financiers and customers may see the findings as cause for concern, given the long history of environmental and human rights abuses by the companies. Several of GAR’s customers, including well-known retail brands, have zero-deforestation and human rights policies in place, which should raise concerns among those companies as well as among GAR’s financiers. The OECD Guidelines for Multinational Enterprises also require companies and their financiers to provide remedy in cases of environmental and human rights abuse.

GAR and GVL have largely failed to adhere to the requirements in a complaints process with the RSPO that was filed in 2012. In early 2019, GAR was de-listed from the Dow Jones Sustainability Index after several high level company executives were jailed for bribing Indonesian officials.

Danielle van Oijen from Milieudefensie said: “If this complaint procedure is to bring good to the people and forests of Liberia, GAR and GVL should be directed by financiers to improve its practices on an immediate timeline. If these companies fail once again to do so, investors should halt their financing.  Governments should act to regulate the financial sector to avoid financing deforestation and rights violations. Decision makers must recognize that a transition to healthy food systems and community-based agriculture and forest management is the only way to avoid the systemic abuses linked to the monoculture plantation industry.’

Jeff Conant from Friends of the Earth US adds that “GAR does business with a long list of consumer brands, including Procter & Gamble, Pepsico, Nestle, General Mills, Mondelez and others; and receives investment from, among others, BlackRock, Vanguard, and State Street. Each of these entities holds a share of responsibility and can no longer turn a blind eye to a decade of destruction by GAR’s project in Liberia.”