Conflicts over land flared up across Indonesia in 2020, as Indigenous and rural communities tried to hold off pulpwood, palm oil and logging companies ramping up their expansion during the COVID-19 pandemic.

The flurry of activity came despite the economic slowdown wrought by the government’s response to the pandemic, and suggests the companies were taking advantage of the situation to lay claim to disputed territory, according to the Consortium for Agrarian Reform (KPA), an NGO that advocates for rural land rights.

In its year-end report, the KPA recorded 138 land conflicts between April and September 2020, up from 133 in the same period in 2019. The 2019 cases occurred during a strong economy, when GDP grew by 5.01%, while the 2020 cases were recorded during Indonesia’s first recession in two decades, when the economy shrank by 4.4%.

While the increase in the number of conflicts is small, it’s highly unusual, given that such cases decline during a weak economy as companies put their investment and expansion plans on hold, said KPA secretary-general Dewi Kartika.

For the whole of 2020, the KPA recorded 241 land conflicts involving 359 villages and spanning a combined area of 624,272 hectares (1.54 million acres). In 2008, during the last global recession, the KPA identified only 24 land conflicts across Indonesia, Dewi said.

“We concluded that there’s been large-scale land grabbing amid the pandemic,” she said at the launch of the report. She added that companies took advantage of the social-distancing measures imposed by the government, which restricted movement and prohibited gatherings such as protests that form a key component of rural land rights advocacy.

This is especially apparent in the plantation sector (primarily palm oil) and pulpwood and logging sector, generally referred to as forestry, which have long been associated with massive deforestation and land grabbing in Indonesia.

“A 200% negative economic downturn [in 2020] would have had no implication for these industries, especially the plantation and forestry sectors,” Dewi said. “Because [plantations and forestry], which have become a classic source of agrarian problems in Indonesia, actually had a significant increase [in conflicts in 2020].

“The plantation sector is very land-hungry,” she added, “and it often clashes with people’s settlements, agricultural lands and locals’ plantations.”

The disputes have also been deadly. Eleven people were killed, 19 experienced some form of physical violence, and 134 faced criminal charges. Nearly all were Indigenous people, farmers or activists.

“In terms of escalation of violence, this is ironic because we are currently faced with multiple crises due to the COVID-19 pandemic,” Dewi said. “Social distancing [measures] don’t prevent violence and are not effective in preventing violent and repressive actions on the ground.”

Trouble on the farm

The conflicts center on rival claims to land, with local communities accusing big companies of taking over their communal or ancestral territory. The plantation sector accounted for most of these disputes, 122 cases in 2020, according to the KPA report, or a 28% increase over the previous year. In 101 of these cases, the companies were palm oil firms.

“This portrait of agrarian conflicts reminds us again that the system and practices of large-scale plantations in Indonesia have a lot of structural problems that are acute and systemic,” Dewi said. “This is evidenced by the fact that it’s not only in 2020, but the plantation sector has consistently contributed the largest number of agrarian conflicts in the past five years.”

She said plantation companies were able to get away with land grabbing thanks to favorable laws and regulations. Dewi noted that many of the plantation companies embroiled in conflict are also affiliated with major conglomerates, both Indonesian and foreign, as subsidiaries, suppliers or partners.

Many of the same companies are also linked to conflicts in the forestry sector, such asAPRIL, Sinar Mas, Marubeni and Texmaco, along with Indonesian state-owned forestry company Perum Perhutani.

“One of the companies that did the most violence with intensifying [conflicts] in 2020 is an affiliate of the Sinar Mas Group, done by its subsidiary in Jambi called PT Wirakarya Sakti [WKS],” Dewi said.

Residents of Lubuk Mandarsah village in the Sumatran province of Jambi have since 2007 been embroiled in a dispute over 2,000 hectares (4,940 acres) of ancestral land also claimed by WKS, which grows acacia to make wood pulp and paper. The villagers allege a litany of violations by the company last year, including in March, when WKS allegedly flew a drone to spray herbicide on the villagers’ crops.

That same month, the company filed a police complaint against one of the villagers, accusing him and other locals of encroaching on the company’s land. At the same time, the villagers said they faced intimidation by representatives from WKS, along with two unidentified people, to give up their land.

In April 2020, a soldier accompanying WKS personnel reportedly fired two warning shots in the presence of a farmer. And in September and December 2020, WKS reportedly bulldozed the residents’ farms, according to the KPA’s report.

“We noted that since the beginning of the pandemic in March until September, [WKS] often carried out eviction and land acquisition in a repressive manner against farmers in Jambi,” Dewi said. “So this needs attention from the Ministry of Environment and Forestry. We have complained multiple times to the ministry.”

She added that with the pulpwood industry continuing to be plagued by land conflicts, there’s an urgent need for reform.

“These companies’ practices have resulted in land monopoly by large-scale corporations,” Dewi said. “For example, the Sinar Mas Group controls more than 26,000 hectares [64,200 acres] of land in Jambi alone, resulting from land grabbing, manipulation of permit size, and violence.” 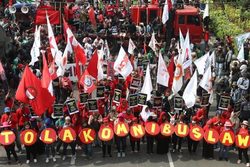 Another factor in the high number of land disputes last year is infrastructure. Seventeen of the 30 infrastructure-related disputes center on projects that the government has promoted as being of “strategic national importance,” including airports, toll roads, dams and ports.

This infrastructure push is expected to be supercharged by a controversial slate of deregulation, known as the “omnibus law on job creation,” that parliament passed last year amid near-universal criticism.

Activists say the law favors business interests and sidelines rural communities and Indigenous peoples by, among other things, expanding the government’s power of eminent domain over areas that it designates as special economic zones, tourism zones and industrial zones. The omnibus law also limits opportunities for the public to have a say in approving infrastructure projects in a given area.

“In the future, it is projected that [land conflicts] will escalate because of the omnibus law,” Dewi said.

One “nationally strategic” project that’s expected to spark land conflicts is the “food estate” program, through which the government wants to establish large-scale agricultural estates across the country in a bid to boost domestic food production. Among the regions expected to become agricultural centers under this program are the provinces of North Sumatra and South Sumatra in the country’s west, Central Kalimantan on the Indonesian portion of Borneo Island, and East Nusa Tenggara and Papua in the east.

“This program is very fast in its land acquisition process compared to the sluggishness of land provision for farmers,” Dewi said. “These farmers’ lands are small in size, whereas the consolidation for land procurement for food estates is very fast. The food estate program has become a new threat in the form of large-scale land grabbing because of land provision on such a large scale.”

Activists have also raised concerns over President Joko Widodo’s decision to put his defense minister, Prabowo Subianto, in charge of part of the program and enlist the military to assist, arguing that such a move raises the prospect of a security crackdown on civilian opposition to the program.

Prabowo is a former Special Forces commander implicated in the disappearance of pro-democracy activists in the late 1990s.

“What’s ironic is that this food estate program means that agrarian reform is once again not the main option to strengthen Indonesia’s agriculture and farmers’ capacity as the main food producers,” Dewi said. “What continues to be championed is food security through the corporatization of food, which entails the involvement of the military in land clearing and land acquisition.”

Sugeng Purnomo, a deputy to the coordinating minister for politics, law and human rights, acknowledged that land conflicts are an ongoing problem in Indonesia. He said 60% of reports of conflicts reported to the ministry are related to land.

“This shows that agrarian conflicts continue to happen,” he said. “But if we want to compare it with data from 1998, we can’t do that because the backgrounds of the economic slump in 1998 and 2020 are very different.”

Surya Tjandra, the deputy minister for land and zoning, attributed the conflicts to the large disparity in land ownership between large companies and communities.

“Maybe we haven’t touched the issue of access to land ownership,” he said. “Why is it difficult to solve conflicts? Because it needs a very strong leadership.”

Surya said the administration would not be able to resolve all the cases by the time President Widodo’s second term ends in 2024, but could at least start building a foundation for a conflict-resolution mechanism.

“So our task is to prepare [the framework] first, and those who will execute it will be the next minister and deputy minister,” he said.

Role of the police

A recurring theme in land conflicts throughout Indonesia is the role of the security forces, which invariably side with companies against communities.

Arif Rahman, the director of sociocultural issues in the National Police’s intelligence department, refuted the notion that the police were doing the bidding of the companies. He said the police were merely doing their job of maintaining security amid often tense situations, and that any law enforcement action against Indigenous groups, small farmers, protesters and activists shouldn’t be perceived as a “criminalization” effort.

“The police will secure whoever has legal [rights to the land],” Arif added. But, he said, Indonesians “don’t have a good understanding of the law, and thus they often deem the law to not exist, to not be fair or on the side of the common people.”

Arif called for addressing the lack of clarity in land ownership. Dewi criticized this view of upholding property rights without considering a range of other factors .

“If the perspective is only based on the legality of land ownership, then it’s very dangerous because there are many farmers, villagers and peasants who have not been recognized [by the government] for decades,” she said. “This view is what causes many evictions, because from the very beginning, people’s lands aren’t being registered [by the government].”

To address land conflicts in a meaningful way, some of which have simmered for decades, will require more than a one-size-fits-all solution, Dewi said.

“There needs to be a paradigm shift to see people’s rights to their lands and correct the concept of state-owned lands that has been corrupted,” she said. “And also to correct the way the government and security officers deal with agrarian conflicts on the ground.”