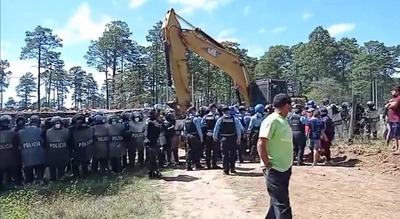 On February 5th, armed Honduran National Police forcibly evicted the campesino groups, Unidos al Campo and Mujeres y Hombres de Fe from land they recuperated and began working over 12 years ago. The land was originally vacant, undeveloped public (ejidal) land. At the time of the eviction there was a fruit orchard, fields of beans and corn and more than 40 family homes on the land, all the product of the campesino groups' work. During the eviction, the police threatened the community members, arrested one woman (later released) and destroyed all the homes and the crops using heavy construction equipment. 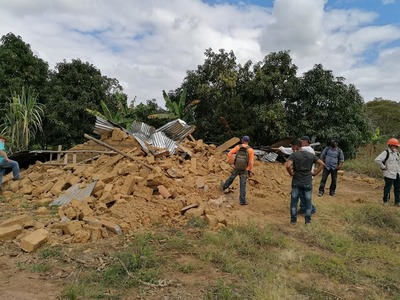 The eviction and destruction caused widespread indignation as it comes in the midst of a social, agricultural and food crisis caused by government actions and inaction during COVID19 and the two major hurricanes that hit the country at the end of 2020.

Both campesino groups are affiliated to the National Union of Rural Workers (Central Nacional de los Trabajadores del Campo-CNTC) which on January 25th celebrated 36 years of fighting for land rights and food sovereignty in Honduras.

Franklin Almendares, General Secretary of the CNTC, dennounced the eviction as completely unjustifiable, especially when hunger and homelessness are at crisis levels and rising daily, people are fleeing the country, while the government "uses every pretext to criminalize land defenders and to displace rural communities permamently" instead of rebuilding and increasing agricultural food production. Another member of the national leadership of the CNTC, Melvin Orellano wrote about the eviction that,
"..... A criminal group made up of government magistrates, judges, military police, paramilitaries, in collusion with big landowners have taken another action to destroy peace and to sow terror among the people".