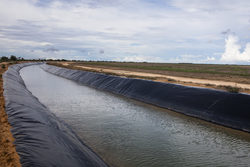 Irrigation channel supplying the central pivot system for a soybean plantation in the Cerrado. (Photo: Victor Moriyama/Greenpeace Brazil)
Mongabay | 8 February 2021
Pandemic fails to slow agribusiness’s thirst for Cerrado’s water
BY CAIO DE FREITAS PAES | TRANSLATED BY ROBERTO CATALDO
• Between April and November last year, the government of the Brazilian state of Bahia authorized agribusinesses to collect nearly 2 billion liters (528 million gallons) of water a day.
• The spread of giant soybean plantations in the state’s west threatens tributaries, floodplains and sources of essential rivers such as the Corrente and the São Francisco.
• The large-scale irrigation poses a major threat to traditional communities, whose own communal farming practices have long protected the Cerrado’s water resources.
• Tensions over water management sparked a popular movement by small farmers in 2017, known as the “Water Uprising” and aimed at protecting the Cerrado’s water resources.
In November 2017, about a thousand small farmers, cowboys and their families got on buses and headed to the Rio Claro farm, owned by Lavoura e Pecuária Igarashi, one of many companies using large-scale irrigation in Brazil’s Bahia state. They blamed the farm for the degradation of the Arrojado River, which supplies water to their lands in Correntina municipality, 830 kilometers (515 miles) from the state capital, Salvador.
The confrontation turned violent as the small farmers, campesinos, destroyed equipment on the farm, making headlines in the country’s main newspapers. It also sparked an offensive against the campesinos in Congress by the so-called ruralist caucus, staunch defenders of agribusiness interests. But the politicians did not expect the local population to push back. On Nov. 13 that year, more than 11,000 people took to the streets of Correntina to defend the rivers and the Cerrado grassland ecosystem that makes up much of the state. In the more than three years since then, the government has still not responded to the demands of the movement known as the “Water Uprising.”