The Parceiro farm, which belongs to SLC Agrícola and is located in Formosa do Rio Preto, has been implicated in an investigation into land grabbing. The town is the heart of the deforestation in the Cerrado biome. (Photo: SLC Agrícola)

In the far west of Brazil’s Bahia state, sprawling soybean plantations extend from the edges of the highways right up to the horizon. The region is considered Brazil’s new grain frontier, its roads bustling with trucks hauling agrochemicals, cattle, and tons of soybeans. The 2019-2020 harvest was the second best in the history of Bahia: more than 6 million tons of soybeans were produced in the state. That kind of output has attracted major companies such as SLC Agrícola, one of the largest grain producers in Brazil.

During the peak of the coronavirus pandemic in the country, in mid-June, SLC CEO Aurélio Pavinato said that “the role of agribusiness is to produce food in sustainable ways.” But just months earlier, between January and March, his company deforested ​​5,200 hectares (12,850 acres) of the Cerrado savanna in Bahia, an area larger than 5,000 football fields. In October of this year, another 4,000 hectares (nearly 10,000 acres) burned in the same area. The NGO Chain Reaction Research, which monitors the global agricultural commodities market, detected the deforestation and burning through satellite monitoring.

The destruction was centered at the Parceiro farm in the town of Formosa do Rio Preto — itself the heart of the deforestation in the entire Cerrado. Part of the farm’s area, currently used for growing soybeans, was the subject of a brazen land-grabbing scheme that was investigated by law enforcers. The story is illustrative of the power of agribusiness in the Brazilian savanna, which has an impact across a global web of businesses and people.

A key player in this web is Cargill, the second-largest privately held company in the U.S., which purchased just over 25% of SLC’s output in 2019.

The deforestation and fires associated with the farm did not drive Cargill away, and the company confirmed to Mongabay that it still buys soybeans produced at Parceiro. The company’s decisions have an impact on a huge number of consumers, since it owns soybean oil brands Liza and Purilev and supplies chains like KFC and McDonald’s.

However, it is not just environmental problems that haunt SLC’s lands in Bahia. Experts told Mongabay that the land titles for many farms in this region are sketchy at best — a problem that extends to the company, its customers, and their consumers.

“Traditional peoples are trapped by soybean plantations [in west Bahia] and their resistance became more difficult with the arrival of international investors,” says Carla Morsh, a researcher at the Federal Rural University of Rio de Janeiro (UFRRJ) who has a Ph.D. in social sciences.

According to her research, more than 1.7 million hectares (4.2 million acres) of Cerrado are controlled by foreign business groups. That represents an area more than ten times the size of ​​Los Angeles — and a violation of Brazilian law, which restricts land ownership by foreigners.

Morsh says companies from several countries have been linked to “areas in Bahia’s Cerrado where land grabbing has existed since the 1960s.” The case involving SLC and Cargill is no exception and also implicates another major U.S. investor, TIAA-CREF, that has been associated with this type of crime in the state for years.

Land theft is a common crime in Bahia, with cases of title fraud forcing large companies and investors to navigate a legal minefield.

“Behind the land grabbing, there is a whole structure with several layers of illegality. It’s professionalized and it includes politicians,” Morsh says.

The Federal Prosecution Service and the Superior Court of Justice agree the problem is dire. In a joint investigation, they have raised allegations of corruption and land grabbing involving numerous properties, including part of SLC’s Parceiro farm.

Implicated in the case is the Teachers Insurance and Annuity Association of America, an investment fund better known as TIAA, which manages the pension fund of teachers across the U.S. Among TIAA’s investments in Brazil is land that it leases, via an obscure web of companies, to SLC in Formosa do Rio Preto. A former partner of the fund in this business plays a prominent role in the land-grabbing case being investigated by the Brazilian authorities.

In November 2019, the Federal Prosecution Service’s “Operation Far West” uncovered a $200 million corruption scheme in Bahia involving farmers, lawyers and even judges, to effectively pay for rulings legitimizing land grabs. Several of the perpetrators have been jailed since then, while death threats have been made against potential whistle-blowers and one witness was even murdered.

The investigation revealed some of the favorable court decisions secured via bribes pertained to land in Formosa do Rio Preto. This particular case relied on an unregistered document: the title for the São José farm, whose boundaries have been expanded many times since 2007 on the basis of court rulings, growing from 43,000 to 366,000 hectares (106,000 to 904,000 acres) — nearly three times the size of Los Angeles.

The farm swallowed up neighboring properties with each ruling, among them the United and the Parceiros (not to be confused with Parceiro) farms. These two areas are linked to Radar S/A, a joint enterprise of TIAA and the Brazilian agricultural company Cosan. Both farms received funding through a network of foreign investments linked to TIAA, such as the Nuveen group and the Mansilla and TCGA I funds. These links between farms and foreign investors have also been highlighted by the NGOs Chain Reaction Research and Rede Social de Justiça e Direitos Humanos.

The U.S. investment fund also partnered with Luiz Ricardi, a longtime agribusiness operator in Bahia. Together with TIAA, he was in charge of the Parceiros farm, worth more than 19.2 million reais ($3.5 million), according to Brazilian tax authorities.

Ricardi was also a lead player in the land-grabbing scandal investigated by the Federal Prosecution Service. According to the Superior Court of Justice, he would “prepare an area within the [illegally achieved] farm” for agriculture, given his experience in the business, and would get a share of the stolen land. He did this while still partnering with the U.S. investment fund.

TIAA did not respond to Mongabay’s requests for comments. Luiz Ricardi could not be contacted. 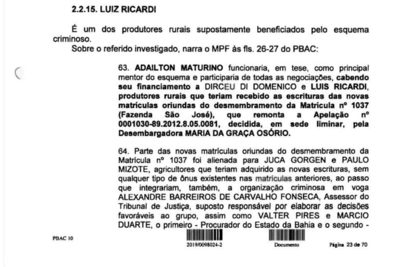 Despite the revelations unearthed by the investigation, TIAA remains invested in the Parceiros land parcel at the center of the land grab. The shell company used in the scheme was still registered as the owner of Parceiros (São José farm – Lot 01 – Remanescente II) until December. The Brazilian federal agency Incra, responsible for monitoring the National Land Management System, only took action after a determination from the Brazilian Council of Justice, who canceled the registration of the Parceiros land parcel. The area in question remains under intense dispute between farmers in western Bahia, still without a verdict on who its true owners are.

This is where SLC Agrícola and Cargill enter the picture.

Since 2012, SLC has planted cotton and soybeans on what it calls the Parceiro farm (without the “s”), which was deforested and burned in Formosa do Rio Preto during the pandemic in 2020. It spans 42,000 hectares (103,000 acres), about a quarter of which is leased, but no details are available about its owners, as reported by SLC itself.

Mongabay checked the boundaries of the Parceiro farm and of TIAA’s Parceiros farm, and found a significant overlap. Effectively, SLC is growing its soybeans on illegally acquired land, which is then exported worldwide by Cargill and other traders. 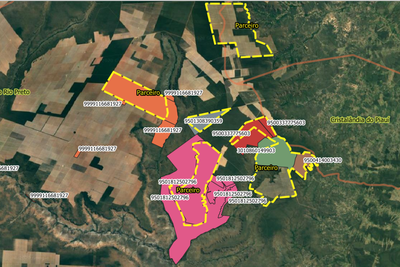 SLC’s leased land, the dashed yellow line, is part of an area illegally grabbed with support from Luiz Ricardi, a former partner of the US teachers’ pension fund TIAA. Image by Prcros-SLC_ picture AidEnvironment from data from Incra and SLC.


Asked to comment on this, SLC Agrícola said that “only the northern and western portions [of the Parceiro farm] are currently in operation.” The areas involved in the land-grabbing scheme investigated by the Federal Prosecution Service are located precisely in that western portion. The company confirmed that part of the farm is leased under a partnership with Radar S/A, linked to U.S.-based TIAA.

What happens on SLC Agrícola’s land has ramifications far beyond. Last year, one of the company’s top investors, the U.K. investment fund Odey Asset Management, came under intense pressure as a result of SLC’s deforestation of the Cerrado, even when it was done legally. SLC’s buyers have also come under pressure.

In 2019, trading companies Cargill, Bunge and Amaggi-Louis Dreyfus bought produce valued at nearly 1.5 million reais ($274,000) from SLC. Each of those companies has its own environmental policies, and together have created a forum to coordinate sustainable practices in the Cerrado, which they deem a conservation priority.

“All three companies have made zero-deforestation commitments,” according to Chain Reaction Research, which adds that “SLC Agrícola’s recent clearing [in Formosa do Rio Preto] appears to be in direct violation of the principles of these policies” — a practice that is not entirely new.

Based on satellite images, Chain Reaction Research estimates that SLC deforested 39,000 hectares (96,000 acres) of Cerrado between 2011 and 2017. Between 2007 and 2010, SLC was fined more than 12.5 million reais ($2.3 million) by the Brazilian environmental regulator, IBAMA, for illegal deforestation, according to De Olho nos Ruralistas.

SLC, in turn, says that “the clearing of all areas complied with current legislation and was authorized.” Brazil’s Forest Code does allow cutting down up to 80% of native forest in farms in the Cerrado. Controls are much stricter for farms in the Amazon, where only 20% of a property may be cleared.

As a result, western Bahia has lost an area of Cerrado equivalent to nearly 10 times the size of Los Angeles (about 1.1 million hectares, or 2.7 million acres) in the past 20 years.

Cargill told Mongabay that it placed no restrictions on soybeans purchased from SLC in 2020. It says it is committed to achieving zero deforestation in the Cerrado by the end of the year, but its chief sustainability officer, Ruth Kimmelshue, acknowledged that this would not be possible. “Despite our collective efforts, our industry will fall short of a 2020 goal to eliminate deforestation,” she said in June 2019.

Cargill itself has been fined for encouraging soybean plantations in Cerrado areas in the state of Maranhão, where such cultivation is not allowed. A recent Greenpeace investigation shows a similar incident in west Bahia. Greenpeace has also raised concerns over the climate implications of soybeans grown on deforested land.

In late November, the NGO traced soybeans consumed in the U.K. to farms in Formosa do Rio Preto. It noted that “the revelations come at a time when the British government is debating new legislation to eliminate deforestation from the country’s supply chains.”

This report was supported by the Fund for Investigative Journalism (FIJ)