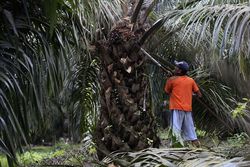 Researchers have urged authorities in West Kalimantan to develop better schemes to resolve conflicts surrounding the palm oil business as the region has been marred by decades of unsolved conflicts and ineffective resolution mechanisms.

About 66 per cent of conflicts related to palm oil in West Kalimantan in the last two decades have yet to be resolved, according to a report recently issued by the Royal Netherlands Institute of Southeast Asian and Caribbean Studies (KITLV).

Moreover, most conflicts took an average of five years to be resolved.

Resolving palm oil conflicts in West Kalimantan is deemed important as the province is the second-biggest palm oil producer in the country with 1.8 million hectares of plantations after Riau, according to Statistics Indonesia (BPS) in 2019.

Palm oil is also a major driver of the region’s economy.

The research investigated 32 out of 69 identified conflicts in the province within the last 20 years.

According to the research, most observed conflicts were triggered by land grabbing for oil palm plantations and the plasma smallholder scheme, in which farmers would sell their produce to a plantation company.

“The conflicts have significantly affected the pockets of not only local communities but also the companies.

Finding ways to resolve the conflicts is an urgent but not easy task, ” KITLV senior researcher Ward Berenschot said during a webinar on Jan 19.

He added that farmers had complained of the land grabbing by palm oil companies upon acquiring land for new plantations.

They also complained about a lack of compensation in the acquisition process. Companies were also accused of mismanaging land and reducing benefits to farmers under the plasma cooperation scheme, Berenschot went on to say.

Under the plasma cooperation, large companies are required to provide training, supplies of seedlings and fertiliser and guaranteed buyers for their harvest.

Most conflict resolutions, the report suggested, took the form of mediation between representatives of companies and farmers.

However, the process had often been marred by companies providing incomplete or false information on the impact of oil palm plantations and the compensation payment, among other information.

Plantation companies often hire thugs to attend the mediation process to intimidate the farmers, according to the report.

The report added most members of local communities did not reject the development in their area. However, they demanded that the companies give more compensation in exchange for their land and contribution to local labor management.

KITLV researcher Ahmad Dhiaulhaq said only eight out of 26 cases facilitated by local administrations, regional councils and the police had reached an agreement.

Ahmad recorded that the farmers had only won two out of five cases taken to court.

“When locals win in court, companies often don’t fulfil the rulings, ” he said.

The conflicts also often lead to criminalszation against locals that stage peaceful demonstrations against the plantation companies.

According to the research, around 31 per cent of the conflicts had resulted in arrests, with 12 people injured during the process.

However, he added that regency administrations had a more strategic role and authority in preventing and resolving conflicts.

“The regencies issue permits. They have been given the necessary instruments. They can perform regional evaluation, which is strategic and legally valid, ” said Heronimus.

The administration is monitoring 28 palm oil companies in the regency.

“We are reviewing their permits, ” he said.

Only 70 out of 378 palm oil plantation companies in West Kalimantan are Gapki members. - The Jakarta Post/Asia News Network