Largest higher education union in the US pushes TIAA to divest from fossil fuels, deforestation 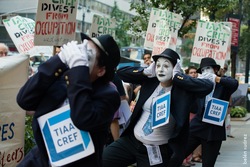 The United University Professions' resolution calls for an end to TIAA landholdings “associated with deforestation and human rights abuses".
TIAA Divest! and UPP | 27 January 2021
Nation’s largest higher education union pushes TIAA to divest from fossil fuels, deforestation
“The fight for our common future cannot be delayed”: UUP Union President
NEW YORK – The largest higher education union in the U.S., the United University Professions (UUP), passed a resolution on January 23rd pressing TIAA to divest from fossil fuels and deforestation-risk investments, which worsen climate change. UUP is the union representing faculty and staff across the State University of New York (SUNY) higher education system. TIAA, the giant financial services company, manages retirement funds for most SUNY faculty and staff. In December, both the SUNY New Paltz Faculty Senate and the SUNY New Paltz UUP Chapter passed resolutions urging TIAA to stop funding climate destruction, amidst an increasingly powerful fossil fuel divestment movement.
Fred Kowal, the statewide UUP President, commented, "UUP has taken the absolutely necessary step of calling for TIAA to divest from those companies engaged in exploiting energy sources that are exacerbating the serious climate crisis we're facing. We are honored to stand with those on the frontlines fighting for true environmental justice. The fight for our common future cannot be delayed or fought with half-way measures. Divestment is an urgent and necessary step."
Brian Obach, Sociology Professor at SUNY New Paltz, added, “I am so proud that UUP has taken a strong stance in favor of fossil fuel divestment. As a SUNY faculty member with retirement funds managed by TIAA, I am disgusted by the fact that my money is advancing climate change, deforestation, and human rights abuses.”
The resolution condemns TIAA’s $8 billion in investments which harm climate and communities. TIAA has invested $477 million in agribusiness holdings which contribute to deforestation, indigenous rights violations, and environmental degradation[1]. TIAA has invested $7 billion in the fossil fuel industry[2]. UUP’s resolution calls on the SUNY Board of Trustees to “advocate for the divestment of TIAA funds from all fossil fuel holdings,” and to push to end TIAA landholdings “associated with deforestation and human rights abuses.” A Brazilian agency is now challenging TIAA’s land grabs in Brazil[3] as illegal[4], adding further punch to the divestment push.
Ross Borden, a lecturer in English at SUNY Cortland and a member of the SUNY Cortland Faculty Senate, looks to the future: “It’s wonderful news that UUP has joined the TIAA-Divest campaign.  Here’s hoping every SUNY campus will soon join the campaign, following the example of New Paltz and building momentum for public and private universities across the U.S. to divest from catastrophic environmental harms.”
“As a young person, I believe it is vital that we hold financial companies such as TIAA accountable. This resolution is another step towards halting the harm that these investments can have on the environment and on our own communities,” comments Alexandra Crawford, an undergraduate student at SUNY New Paltz.