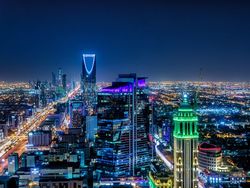 Riyadh city skyline at night. (Image Credit: Shutterstock)
Saudi Arabia triples agriculture investments abroad
by Samir Salama
Abu Dhabi: Saudi Arabia’s Agricultural Development Fund loans have grown by 300 per cent since 2016 to be worth more than 3.7 billion riyals, a senior official said.
Munir bin Fahd Al Sahli, Director General of the Agricultural Development Fund, said part of the fund’s investments abroad was to mitigate the impact of the COVID-19 pandemic, expecting that the fund will continue to support the agricultural sector in full coordination with the Ministry of Environment, Water and Agriculture and the National Development Fund to support the food security strategy in the Kingdom.
While the programme to support Saudi investments abroad aims to diversify and stabilise sources of foreign food supplies as part of the Kingdom’s food security initiative, and covers projects that produce eight basic crops, the investment portfolio of the Agricultural Development Fund abroad amounted to one billion riyals, an increase of about 55 per cent over its value in 2019, which amounted to 644 million riyals during the first year of the programme.
Investments also more than tripled, as the fund began supporting Saudi investments abroad with 284.25 million riyals.
First year
The first for the foreign agricultural investment programme saw the approval of loans totaling 644 million Saudi riyals, with the aim of growing and supplying barley, wheat, corn, oilseeds, and soybeans from Ukraine, in addition to approving a project for one of the national companies specialised in agricultural investment and animal production in Sudan.
New projects
The fund has started supporting Saudi investments abroad with amounts of $75 million, on the condition that at least 50 per cent of the project’s crops be exported to the Kingdom, as the loan will cover up to 60 per cent of the project’s value. The loan provided by the fund ranges from $25 to $75 million that includes new projects, in addition to expanding existing projects. The fund stipulated that at least 50 per cent of the company requesting the loan be owned by a Saudi citizen, and that the company be registered in the Kingdom.