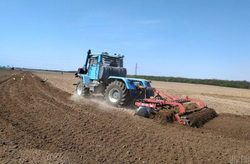 The law provides for a gradual land reform: only citizens of Ukraine will be able to buy agricultural land with a limit of 100 hectares per individual as of July 1, 2021. At the second stage, as of January 1, 2024, land concentration will increase to 10,000 hectares, and legal entities will also be allowed to acquire farmland.

In June 2020, President Zelensky said Ukraine would lift farmland purchase restrictions only after Ukrainian farmers were given access to low-interest loans for that purpose.

On October 15, 2020, Zelensky signed a decree on the transfer of agricultural land from state to municipal ownership.

On the same day, State Geocadastre head Roman Leshchenko said that about 750,000 hectares of land would remain in state ownership after the transfer of more than 2 million hectares of agricultural land to municipal ownership under the presidential decree.

On November 9, 2020, the Cabinet of Ministers proposed new methods be introduced to evaluate farmland.

On November 10, 2020, Deputy Minister for Development of Economy, Trade and Agriculture Taras Vysotskyi announced that the government would allocate UAH 500 million (US$17.8 million) in the 2021 budget for the first stage of the farmland reform.

On November 11, 2020, the Cabinet of Ministers improved control over the concentration of agricultural land in the ownership of one person.

On November 17, 2020, the Cabinet of Ministers approved a decree on the transfer of farmland to territorial communities.