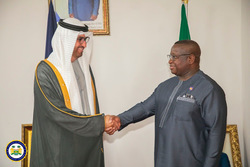 The investing company, Elite Agro LLC, has operations across the globe.

Speaking in the well of parliament, the Deputy Minister of Agriculture, Sam-King Brima, noted that the company is investing in the agricultural sector of the country that has been struggling for long due to insufficient investment. He explained that the company is committed under the said agreement to cultivate 14,700 hecters of rice production in the Rogbeh Swamps in Port Loko District, an investment worth 54 million dollars.

Mr Brima went on to note that the activity will commence by next week during which lots of the activities leading to the topographical studies will kick off. He explained that two percent of the total net profit will go to the agricultural sector for a research purpose on how to grow local food instead of importing, while one percent of the said net profit will go to the farming community.

According to the deputy minister, the goal of the agreement is to achieve food self-sufficiency, with a targeted 22, 500 metric tons that translates to 650,000 bags of 50kg rice. And in the third year, the company is targeting a production line of up to 130, 000 metric tons, which is equivalent to 2,600,000 bags of 50kg rice, a figure the minister said will be sufficient to cover 25% of the rice production in the country and create 5000 jobs.

He added that the rice that will be produced will be of high standard, which can be sold both in Sierra Leone and beyond.

While applauding the Bio led administration for such an agreement, Dr. Kandeh Kolleh Yumkella, Member of Parliament for Constituency 062 in Kmabia District, called on the attention of the ministry to seriously consider the issue of land rights of the local people and that of environmental impact.

In his response, the Minister assured the house of parliament that the issue of land rights will be adequately dealt with. He explained that even though the paramount chief, together with other stakeholders of the chiefdom agreed to provide the land free of charge, President Julius Maada Bio insisted that the company pays some amount of money for the utilization of land to the people.

Abdulai Papa Kargbo, MP of Constituency 047, Tonkolili, also joined other speakers to applaud the government for inviting a private company to invest in a sector that has been seriously challenged, noting that it will drastically reduce the millions of dollars which government spends on the importation of rice annually.