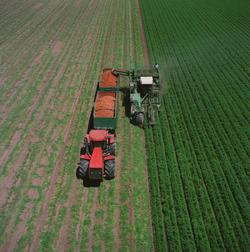 By John Cox
Bakersfield-based carrots giant Grimmway Farms said Wednesday it has reached an agreement to sell to an Indiana conglomerate that focuses on agricultural investments.
The buyer is Teays River Investments LLC, an assets-management firm founded in 2009 and headquartered in Zionsville.
Terms of the sale agreement were not disclosed, and Teays could not be reached for comment late afternoon Wednesday.
A spokesperson for Grimmway, which is family-owned, said no major changes are expected as part of the sale. The spokesperson added that the local company's management team is expected to remain in place after the sale closes later this year, and that Grimmway is expected to remain headquartered in Bakersfield.
"Their goal is they're going to be supporting our existing management team as we continue, as we always have, to meet consumer demand for fresh produce," the spokesperson for the company said.
"They are a respected steward that embraces what our core values are," the spokesperson continued, "and they believe very strongly in the continuity of our management team as well as our thousands of team members across the country."
Two months ago it was reported that Grimmway was looking to find a buyer. Grimmway did not confirm or deny the report but said it was "evaluating opportunities to best position the company going forward."
Mergermarket, the London-based news organization that reported sales discussions in September, wrote that one of its sources said Grimmway was expected to keep its organic farmlands for carrots and lease them to third parties.
Founded in Anaheim in the 1960s, Grimmway now employs as many as 9,000 during the course of a normal year. Its biggest rival in the carrots business is locally based Bolthouse Farms, which also has changed hands in recent years and is now owned by a Los Angeles-based private equity firm.
Grimmway popularized baby carrots and calls itself the world's largest producer of carrots. It sells more than 65 organic crops and brands, including Bunny-Luv and Cal-Organic Farms.
The company announced a strategic acquisition in June 2019 that it said would provide the climate, acreage and facilities it needed to expand production near key East Coast markets. Part of the idea was to gain access to year-round farming, less expensive farmland and additional processing capacity, Grimmway CEO Jeff Huckaby said at the time.
The purchase of Lake Park-based Generation Farms meant Grimmway would farm in a total of seven states — Arizona, California, Colorado, Florida, Georgia, Oregon and Washington — up from just two states a few years prior.