FPIC, palm oil firm and the women of Okomu 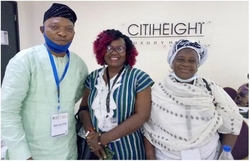 FPIC, palm oil firm and the women of Okomu

“There’s no problem at all. I am fine. I don’t have issues with anybody or company.”

“As I said, I am doing fine. I did not lose anything. Thank you.”

The brick walls presented differently, but the responses were the same from about three women that investigation revealed had lost their farms and other means of livelihood, when some multinationals took interest in their community’s land. One of the women, who had been forced to resort to petty trading, said: “I am not the person you want. It must be my mother. But she just left the shop. When she returns, I will inform you.” And their voices were tinged with apprehension.

Eventually, Mrs. Hajaratu Abdullahi, a native of Okomu, said something: “What I am going through is the second slave trade,” she said in a calm, motherly tone filled with nostalgia. “As we speak, I am in another community begging for land to till next year,” she added. Mrs Abdullahi has been doing this “begging” since her farm disappeared into a swathe of cleared area for Okomu Oil Palm Company Plc.

Rights groups, such as Friends of the Earth Africa (FoEA) agree that industrialisation cannot be stopped. But they are aggrieved that inordinate deforestation is doing more harm than good to the environment and the people that depend on the land and its forest to survive. FoEA captures the binary oppositions of interests concerning forests and land thus: “In general, land belongs to the peoples and communities and they are managed in ways that meet their needs while maintaining a balance with nature.

“While promoters and financiers of agro-commodity plantations treat trees as commodities and as carbon sinks, forest-dependent communities see trees and forest as supporting their culture and food production, having intrinsic values, spiritual significance and as spaces that define their identity” (African Peoples Tribunal [APT], Sessions on Industrial Plantations, 2020).

It was in recognition of the socio-economic dislocations industrial expansions can cause locals that the principle of Free Prior Informed Consent (FPIC) came into being.

FPIC is a United Nations Declaration on the Rights of Indigenous People, UNDRIP-recognised right to give or refuse consent, at any stage, for a project that affects them and/or their environment. According to the Food and Agriculture Organisation, FAO, of the UN, “FPIC enable them (indigenes) to negotiate the conditions under which the project will be designed, implemented, monitored and evaluated. This is also embedded within the universal right to self-determination.”

According to FAO, which launched an FPIC manual in October 2016, Free means the consent is given without coercion, intimidation or manipulation; Prior means the consent is sought sufficiently in advance of any authorisation or commencement of activities; Informed is the engagement and type of information that should be provided prior to seeking consent and also as part of the ongoing consent process; Consent is the collective decision made by the right holders and reached through a customary decision-making process of the communities.

But in spite of its lofty ideals, FPIC has one failing— it has no legal backing. This means it is just a concept that is what the government and the firms interested in a community’s land say it is. As a result, resource grab by transnational companies approved by government have continued to invade communities across Nigeria.

These large scale profit-driven projects are mostly executed without the opportunity for those that really use the land to give or withhold their FPIC. More dire is the fact that the majority of the locals do not know FPIC. It leads to social and environmental impacts for communities with differentiated consequences on women and vulnerable groups.

These women are hardest hit because decisions about land matters do not usually take their voice into consideration and compensations, if any, reach them in trickles. This is the fate of Mrs Abdullahi of Okomu community in Ovia South-West Local Government Area of Edo State, where Okomu Oil Palm has been operating since 1975.

On its site, Okomu Oil says “We are committed to environmentally-sustainable business practices at all stages of production and thus strives for conservation, protection, and rehabilitation.” There are also images of its CSR activities and meetings with “stakeholders” of the communities where they operate.

However, Okomu Oil, like many other multinationals do not know the many battles women such as Mrs Abdullahi face daily to keep fending for their families. As Mr. Felix Olise, Okomu Oil’s spokesman said: “We do not single out any woman or particular persons to speak with. Every community has representatives. They have a king and a Community Development Association (CDA). These ones should carry the women along. We don’t manage the communities, but we are always conscious of what we do. We even have a community liaison officer (CLO) and we meet with these community leaders quarterly.”

However, Mr. Sunday Ajele, National Coordinator, Community Forest Watch, disagreed: “Okomu Oil has a very strong and rigid mindset that has no place for the plight of the women affected by their activities. They are concerned only about their palm trees. In my dealings with them on behalf of women, all they show me are records of what they are doing. But they can’t show us the real identities of the beneficiaries and the community they are from.

“There is connivance between Okomu Oil, some elites in the communities and some politicians. So whenever the women are crying out, these people will speak up as if all is well.”

Ajele said communities in three local government areas of Edo State have been negatively impacted. “Between 1990 and now, three communities have disappeared in Ovia South-West. On May 20,” he added, “another village disappeared. They clear forests and set fire to communities. Communities in Ovia North-East and Uhunbhode started feeling the impact of Okomu Oil’s activities in 2013.”

“But how can we displace a full community when there are federal, state and local governments?” Olise wondered. “It cannot happen anywhere in the world without any uproar. Okomu Oil is a multinational with the eyes of the world watching. So we follow standard procedure in all we do. We are the only company in Nigeria that has three ISO standards and RSPO certification in 2013 and 2018.

“For example, two years ago, an Owan community said our activities were polluting their river. The very next day we were there. A joint team investigated and found that it was the activities of loggers in Sabongida Ora that diverted erosion into the river. They apologised to us.”

Ajele and Okomu Oil, however, are in agreement on one point: Vanguard must come to the communities where Okomu Oil operates to see and broadcast what is on the ground.

Mrs. Abdullahi is not alone in the dark space created by the non-application of FPIC. Vernie Diano from Innabuyog, an alliance of women’s organisation in the Philippines, said something about what happens when FPIC is not respected: “What is at stake for indigenous women? We lose our role to be managers of agricultural production and natural resources. We lose our role in building community harmony and solidarity. We lose our safety and protection when government uses militarisation and violent means of intimidation, harassment, vilification and even extrajudicial killing to repress our legitimate actions to defend our land, life and resources” (KAIROS, 2015).

For Mrs Abdullahi: “All I want is where to I grow pawpaw, cassava, plantain and cocoyam. Other women used to fish. But the land is gone, fishing traps seized and river polluted. They just took over our farmlands without notification. Yet, there was no special arrangement for us. They also regulate movements in and out of our community. A pregnant woman lost her life because she couldn’t get to the hospital. She was told it was already past 6p.m., so she can’t take the normal route.

Another woman lost her pawpaw farm to their activities, which led to her children dropping out of school. This is second slavery. Those days, they chained our people and took them away. Now, it is slavery in our land and we don’t have a voice.

“I remember years ago, when I was with my first pregnancy. Getting to the hospital could be difficult or impossible. But there were herbs we could use and all would be well. There were also vegetables and snails that would enrich our meals. We sell some to take care of ourselves and our children. There were also mango trees that served our economic needs. These days, men and youths fight with us over the fruit because they are now few and everybody wants to get some to sell. Okomu Oil cut down everything for their palm oil plantation.

“Since 2012, we have been writing petitions after petitions. But nothing has come out of them. Nobody, nothing even the elders of our community, is fighting for the women. But we will continue until they listen to us. We are not saying the company should leave. They should just do right by the women of the community.”

These women are scared but determined and dogged. Hannah Deen of Sahn Malen, a rural community in Sierra Leone, watched as her farmland disappeared into the estate of a multinational. Although she becomes emotional every time she talks about her experience, her words capture the entire story of the women of Okomu: “As of now we cannot eat palm oil or its nuts from the place we call home. We want our land back. The bush is our office. I will keep fighting as long as I have breath in me” (APT 2020).

FPIC was not meant for women alone. But it holds answers to their plight, especially the smallholder farmers among them. And between Okomu community, the oil palm firm named after it, the community leaders and rights activists is the socio-economic dislocation of women. This piece is the beginning of the exploration of this dislocation.