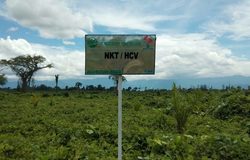 JAKARTA — An area of natural forest the size of 1,500 football fields has been cleared since January in an oil palm concession in Indonesia’s easternmost region of Papua by a company that ultimately supplies major traders and global brands.
The deforestation was first detected in March 2020 by U.S.-based campaign organization Mighty Earth, which found 221 hectares (546 acres) of forest cleared in the concession of PT Medcopapua Hijau Selaras (MPHS), a subsidiary of the Jakarta-based Capitol Group. It dated the clearing to between Jan. 11 and Feb. 24 this year.
Mighty Earth flagged the deforestation in its “Rapid Response” reports, but more clearing occurred in the following months.
Using satellite data from Planet Labs and other sources, alongside concession maps, Mighty Earth found further deforestation of 286 hectares (706 acres) from Feb. 24 to June 18. Monitoring by other NGOs and platforms also picked up on the deforestation.
The Earthqualizer Foundation, an environmental consultancy, reported detecting 732 hectares (1,808 acres) of forest clearance inside the MPHS concessions from January to August.
Papua Atlas, a real-time interactive map showing the spread of plantations and roads in the Papua region, identified 680 hectares (1,680 acres) of forest cleared in that same period, with 675 hectares (1,667 acres) constituting primary forest.
Although there’s some variance between the reported figures, they still point to MPHS being responsible for the largest area of forest cleared in Papua this year — the same conclusion reached by Pusaka, an Indonesian nonprofit that advocates for Indigenous peoples’ rights, which carried out its own monitoring in the region.
According to Pusaka, Papua lost 1,488 hectares (3,676 acres) of forests from January to May this year, with the biggest single instance of deforestation — 372 hectares (919 acres) — occurring inside the MPHS concession.
Upon detecting the deforestation, Mighty Earth reported the matter to MPHS’s clients, including Wilmar International, the world’s biggest palm oil trader. Wilmar, whose customers include Unilever, Kellogg’s and Nestlé, among other major global brands, subsequently launched an investigation, asking MPHS to submit its boundary maps as well as maps of those parts of its concession that contain high conservation value (HCV) and high carbon stock (HCS) forest. That mapping was carried out in 2019 to determine areas within the concession that should be exempt from clearing under the terms of most palm oil buyers’ “sustainability” commitments.
Still, Wilmar was able to detect what it called 26 “small sporadic patches” of land clearing, totaling up to 30 hectares (74 acres) that may have occurred inside MPHS’s HCV/HCS areas. To determine the cause of the deforestation, Wilmar ordered MPHS to carry out a ground investigation, which concluded that the clearing was done by nearby communities to develop smallholder oil palm plots.
Wilmar also said that the areas outside the 26 patches that were identified as deforestation by Mighty Earth occurred within parts of the concession that were permitted for development, called “go areas,” as defined by the HCV/HCS assessment.
Mighty Earth campaign director Phil Aikman said these deforested areas were cleared by MPHS and were shown to be areas of high forest canopy cover.
David Gaveau, a researcher who develops and runs the Papua Atlas, said the go-areas “should’ve been declared HCV/HCS zones [no-go areas] because they were primary forests.”
“We are absolutely certain that in this particular case, the estimated 680 ha cleared in MPHS was forest with High Carbon Stock (HCS) and High Conservation Value (HCV),” he told Mongabay.
MapHubs, which works with Mighty Earth on deforestation monitoring, also drew the same conclusion, saying high-resolution satellite images clearly showed the razing of natural forests.
“I don’t think this is a ‘small sporadic patches of land clearing’ Wilmar are referring to,” MapHubs CEO Leo Bottrill told Mongabay. “The 286 hectares [of deforestation] is clearly industrial deforestation.”
Due dilligence

Bottrill said the deforestation alert by Mighty Earth in March should have been enough reason for Wilmar to push MPHS to impose a moratorium on forest clearing inside its concession. Instead, he said, Wilmar decided to wait for MPHS to conduct its field investigation, which was supposed to begin in March but was delayed to June due to movement restrictions imposed in response to the COVID-19 pandemic.
This effectively gave MPHS cover to continue clearing forests months after Wilmar was made aware of it, Bottrill said. It wasn’t until the field investigation was completed in September that MPHS agreed to observe a strict moratorium on further land clearing.
“It should be noted that after Wilmar and other companies buying from PT MPHS were notified in March, PT MPHS went on to clear over 700 football fields of forest but were unable to send someone to the field with a GPS unit and camera to tell their customers if this was forest or not,” Bottrill said. “You can’t ground truth forest if it’s already been cut down.”
Wilmar said a field verification was necessary before the company could make any decision because satellite imagery alone was not enough in the identification of deforestation.
“It must be supported by the correct and updated variables, including boundaries, ownership and more, paired with necessary ground truthing,” the company said in a statement to Mongabay.
Pusaka director Franky Samperante said his organization had carried out ground truthing to confirm the deforestation inside the MPHS concession, and didn’t only rely on satellite imagery. He said that’s how Pusaka came to the conclusion that MPHS had deforested natural forests.
“We did ground checking and took photos using a drone,” Franky told Mongabay, adding that communities living near the concession also told Pusaka that MPHS had started cutting down the forest in January.
Fact: PT Medco Papua Hijau Selaras keeps converting natural forest to #PalmOil in August 2020, Manokwari #WestPapua. 680 ha cleared since January. pic.twitter.com/jdJ0F8INEM
— David Gaveau (@GaveauD) September 10, 2020
‘Go areas’ and ‘no-go areas’
Aikman said the failure of the HCV/HCS study, which was not peer-reviewed, to correctly identify the deforested areas as natural forests left Wilmar without an avenue to file a grievance over the clearing.
“Wilmar was original basing this decision because it assumed that the clearing highlighted in Rapid Response reports was outside the HCS areas identified in the non-peer reviewed HCS study,” Aikman said. “There are too many cases where traders accept the findings of HCS report at face value, without requiring them to go through a peer review report. I have seen several assessments that identify areas as shrub and not forest.”
Aikman said any land clearing activities should be halted until the HCV/HCS assessment has been peer-reviewed, because there have been instances in the past where HCS assessors did not follow the HCS toolkit and therefore failed to classify areas of high carbon stock for protection.
Gaveau agreed, saying no forest clearing should have been allowed before a peer review to check whether the HCV/HSC maps were correct.
“This makes no sense to me,” he said. “Independent evaluators should be allowed to review those HCV/HCS maps before clearing the areas.”
Wilmar said in its response that the assessment had been conducted by MPHS before Wilmar had begun requiring its suppliers to have their HCV/HCS assessments peer-reviewed under an update to its “No Deforestation, No Peat, No Exploitation” (NDPE) policy in September 2019. It also said that, to date, Wilmar is the only palm oil trader to require an independent review of its suppliers’ HCV/HCS assessments.
Aikman said this is a shift “in the right direction,” but added Wilmar still has much to do in terms of transparency in the MPHS case, including publishing the HCV/HCS assessment, relevant maps, and the name of the company that carried out the assessment.
“As the draft HCS report is not public, we can’t verify what Wilmar is claiming is accurate,” Aikman said.
Gaveau noted that the Indonesian government doesn’t allow plantation companies to share maps of their concessions, but it also doesn’t explicitly prohibit them from sharing HCV/HCS maps.
“So they could share those HCS/HCV maps but they don’t want to,” he said. “So, nobody can verify their claims. This is really dodgy.”
Wilmar said it can’t publish the maps and related documents from its suppliers without the latters’ explicit consent, citing strict non-disclosure agreements (NDAs).
“Our objective is to encourage our suppliers to embrace transparency while providing us with the resources to investigate grievances related to compliance to our NDPE policy,” Wilmar said.
No time to wait

Cases like these should prod major traders and buyers of palm oil into behaving more like watchdogs, Bottrill said, adding it should be part of their job to produce routine reports with corresponding maps and make them publicly available.
“Other information cited by Wilmar such as concession boundaries should also be made public,” he said.
Bottrill also warned against companies’ overreliance on HCV/HCS studies to make a decision, given that the assessments are “an overly convoluted and complex process” that can take months to complete while the forest is cut down in the meantime. That’s where independent monitoring platforms and services can come in, helping companies make quick decisions, such as ordering suppliers to halt deforestation once land clearing is detected.
“Our clients can’t wait months for HCV/HCS reports to be released if the land development is already underway,” Bottrill said. “They want to see a map and then make a decision.”
He added that while detection algorithms and satellite imagery are not 100% perfect, to say that natural forest can only be verified by a certified assessor “is a very high bar.”
“This means only organizations with the budget to hire qualified assessors and then granted permission to access private plantations can ascertain whether an area is natural forest or not,” he said.
Adriani Zakaria, executive director of the Earthqualizer Foundation, agreed. “Not everyone has enough money to hire HCV/HCS assessors,” he told Mongabay.
He said companies shouldn’t fixate on whether a part of their concession is a “go area” or a “no-go area,”  and instead see all forests as something that should be protected and not cut down.
“We saw many cases where areas with HCV/HCS were also deforested,” Adriani said. “So we view forests as forests. When there’s a commitment of zero deforestation, then there should be no deforestation. It’s as simple as that. If you’re still doing HCS [assessments], then don’t call it zero deforestation. Because zero deforestation only applies to areas that have already had their HSC assessed.”
Bottrill said the case of MPHS is ultimately “a good example of the growing democratization of deforestation monitoring.”
“Watchdogs, downstream palm oil buyers, and investors can scrutinize deforestation cases irrespective of what companies choose to share or not share about their practices,” he said.
Original source: Mongabay
TWITTER
FACEBOOK
WHATSAPP
PRINT
E-MAIL
TWITTER
FACEBOOK
WHATSAPP
E-MAIL