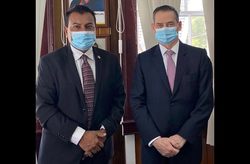 
Chilean investors mull multimillion-dollar ‘agri’ investment
By Navendra Seoraj
OUTSIDE of Guyana’s nascent oil-and-gas industry, which is expected to catalyse widespread growth, agriculture is pegged to be the fastest growing sector in the coming years, and interest in this area has already started to “pour in”, with Chilean investors being the latest to signal their intention to invest in large-scale farming here.
The investors’ intentions were communicated by Chile’s Ambassador to Guyana, Patricio Becker to Chief Executive Officer (CEO) of the Guyana Office for Investment (Go-Invest), Dr. Peter Ramsaroop during a meeting at Go-Invest on Friday last.
The majority of investors over the past few years have gravitated towards Guyana’s oil and gas industry, but this show of interest by the Chilean investors is an indication that other sectors have immense potential as well, Dr. Ramsaroop told the Sunday Chronicle in an invited comment.
The economy of Chile, like Guyana, depends heavily on agriculture; the country has a market economy, driven by supply and demand, and is ranked by the World Bank as a high-income economy.
Chile is also considered to be one of South America’s most prosperous nations, leading the region in competitiveness, income per capita, globalisation, economic freedom, and low perception of corruption.
Specific to agriculture, Chile’s main agricultural products include grapes, whole fresh cow milk, indigenous chicken meat, indigenous cattle meat, indigenous pig meat, apples, tomatoes, wheat, maize, and potatoes. There are 13,564 hectares of organic land in Chile, and approximately 550 organic farms operating in the country.
“Chile is known for their agricultural exports, and there are some companies that want to take a look at Guyana’s agriculture sector, and to explore those opportunities,” Dr. Ramsaroop said.
In Guyana, agriculture is one of the most important productive sectors of its economy, accounting for approximately one-third of the country’s Gross Domestic Product (GDP), and 30 per cent of its employment.
The Chilean investors are expected to add to Guyana’s productivity and production in agriculture, with potential investments anticipated to run into the hundreds of millions of dollars.
Although discussions are still in the preliminary stages, Dr. Ramsaroop said the Chileans want to invest heavily in large-scale agricultural projects.
Those potential investments at reference are aligned with Guyana’s vision for agriculture, he said, noting that the country needs large-scale agricultural projects.
“We need large-scale farming; more value added projects…we already saw that Guyana’s potential is significant in areas like poultry and so on; we have the land mass to do large-scale cattle farming, dairy, and those are the interests we are getting,” Dr. Ramsaroop said.
While not divulging who it was that made it, the CEO said he has already received a proposal to set-up a large-scale dairy plant in Guyana.
And with similar proposals “pouring in”, he anticipates that Guyana’s agriculture sector is going to be one of the fastest growing industries, outside of oil and gas, in the next year.
Minister of Agriculture Zulfikar Mustapha, when contacted by this publication on Saturday, said there is a renewed interest in doing farming and other agricultural projects in Guyana.
The government, he said, has been encouraging investments in this sector by developing agriculture-friendly policies, and removing impediments to growth in this area.
For years, Guyana’s ‘potential’ to become the breadbasket of the Caribbean has been under the spotlight, and while the rhetoric has outweighed action on this front, the country will be looking to realise its potential in the coming years, with immediate focus on tapping into at least 15 per cent of the US$4 billion regional food import bill.
It has been reported that 10 commodities, namely food preparations, wheat, rice, chicken, non-alcoholic beverages, maize, soya bean, sugar and palm oil, account for more than 40 per cent of CARICOM’s food import bill.
Immediately, based on this list, Guyana has the potential to supply rice, sugar and poultry, among many other things. And, there have already been attempts by the government to create a business-friendly environment, by removing Value-Added Tax (VAT) on the poultry industry, as well as removing VAT and duties on machinery and equipment for mining, forestry, agriculture and manufacturing.
These efforts are seen as part of a broader attempt at making Guyana a hub for business and investments. Dr. Ramsaroop even went as far as saying that Guyana is poised to be the “agriculture capital” of the world.
“We have land mass for many produce and products, so if Guyana can go into large-scale plantation farming, it can easily absorb part of the Caribbean’s food import bill,” said the CEO in a past report.
Director of the National Agricultural Research and Extension Institute (NAREI), Dr. Odhu Homenauth, in adding his voice to this topic, had said that Guyana, in preparing to tap into the Caribbean region’s food import bill, would have to thoroughly examine it to see what is being imported and where we could have the competitive edge.
“We have to determine where we have competitive advantage, and for which commodities… We also need to ensure that all the trade barriers are lifted; already, we are supplying a lot of commodities to Barbados, Antigua and some of the other small islands,” Dr. Homenauth reasoned.
Although the country is already a major producer and exporter of rice and sugar, these commodities cannot be ignored in the effort to tap into the bill.
“We can also supply rice and sugar to CARICOM… So, it is not just fruits and vegetables; we could supply significant quantities,” Dr. Homenauth said.
In addition, the country is capable of exporting, and currently exports coconuts, coconut water, watermelons, ground provisions, plantains, pineapples, processed pepper and pumpkin among other foods.
Guyana is capable of producing a lot more, not just for its people, but for the entire region. And, this was evidenced by the country’s ability to remain food-secure amidst the novel coronavirus (COVID-19) pandemic, which has toppled economies across the world.
Original source: Guyana Chronicle
TWITTER
FACEBOOK
WHATSAPP
PRINT
E-MAIL
TWITTER
FACEBOOK
WHATSAPP
E-MAIL