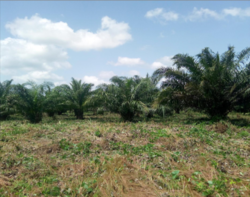 The Sierra Leone Agriculture (SLA) signed a 50-year lease in May of 2010 for 41,582 hectares of land for the development of palm oil for biofuels, displacing over 30,000 residents and farmers, mostly women, in the Northwest district of Sierra Leone

The government of Sierra Leone has been very serious in quest for large scale agricultural investment as well as improving on the food security of its population. During this process, land governance gaps that are not been catered for in relation to land policies and laws on the land tenure system and foreign investment, and or, large scale farming are either exposing vulnerability on the side of communities whose sustainability and livelihood are whole dependent on their lands, or creating misunderstanding with land owners and the investors.
This is the case in Bureh Kaesseh Makonteh (BKM) chiefdom, in Port Loko district where according to a community human rights activist Tijan Ayub Joaque, who is working for United for the Protection of Human Rights (UPHR) and based in the affected communities, the Sierra Leone Agriculture (SLA) signed a 50-year lease in May of 2010 for 41,582 hectares of land for the development of palm oil for biofuels, displacing over 30,000 residents and farmers, mostly women, in the Northwest district of the country. At the time of signing, SLA was a subsidiary of UK-based Caparo Group.
The project, according to the local government sources, planned to establish palm oil plantations on 40,000 ha which they did by 2017, as well as associated biofuel plants, nurseries, and infrastructure. In 2011 SLA was purchased by SIVA Group for US$5 million, thereby transferring the lease to the gigantic Indian-owned company. This investigation however discovered that, land owners where never involved in the change of ownership contrary to a clause in the prior agreement. This means no information about the deal was given to the local communities, and communication continues to be vague and contradictory posing or illustrating insecurity of land ownership. For example, the Oakland Institute (OI) reports village chiefs understand the lease to be renewed every 7 years, but the Crad-l (owner of initial lease, now defunct) website reports a lease of 50 years. 8,500 jobs were promised, but as of October 2020 only 50 were working, mostly casual and without contracts. Specific details are not listed on the company’s website. Additionally, the then Minister of Agriculture of Sierra Leone was reported to have said, he has never heard of SLA – indeed OI reports SLA negotiated directly with local chiefs, therefore bypassing the national government (and its’ regulations), and neither landowners nor local people have copies of the lease. Since the lease was negotiated without the input of the national government, an Environmental and Social Impact Assessment was never done for the SLA lease. The current status of the project is unknown.

This is where the suffering of women begun.

Today, nobody is allowed to enter the plantation site, nor anyone to grow food crops between the oil palm trees.
Ya Bomkapr Kamara, a female chief at Mamanka village, authoritative told this reporter that their husbands who made the decision to lease the entire lands in the community to investors expecting greener pasture, has sold them (the women) to poverty. “They (investors) told us they will provide our children with scholarships,
build schools, dry floors and stores. Today, we still cannot help ourselves, we continue to use our locally dug toilets, and worst of all, our fellow women who cannot withstand the hardship, had run away from debts accrued from microcredit whiles others have gone to other villages burning charcoal” she said.

Most of those men who were employed as laborers by the SLA from within the community where redundant and paid off, except few, Ali Kamara, a community primary school teacher explained. “This redundancy is as well directly impacting the wellbeing and livelihood of our women because they are looking after the men and the children. Those who are not been redundant from the company have not been paid for several month” he emphasized.

By all indication, with the over 40,000 hac, of land been utilized with oil palm plantation, there is no food security in this part of the country as mentioned in the response of Mr. Joaque who said, “oil palm production at BKM is not providing food for the people and even the palm products harvested by the company are being transferred to the Southeast part of the country Sahn Malen in Pujehun district for processing. And that those lands that were been used for the production of rice, cassava, pepper, and even forest fruits, is no more” in the hands of the peasant. The women farmers in Port Loko district, as a result of all the aforementioned, suffer more seriously than words could be stated in this report.

Conclusively, there is need for the speedy processing of the new land policy of Sierra Leone which is reported to have addressed most of these insecurity issues that land owners and users are facing in the hands of investors in the name of large scale farming. Women of BKM need help and it is urgent. Government and other well-meaning organization should step in and or continue to aid these women and their families by creating other livelihood support for them. Again, now that the plantations are mature and are producing fruits, women farmers should be encouraged to grow their minor crops such as vegetables, cassava, potato vines in-between the plantations. These are some of those things this reports finds out as remedy to the problems faced by women in the course of large scale investment in Bureh Kasseh Makonteh cjiefdom, in Port Loko district, Northwest of Sierra Leone.