Soy traders in the Brazilian Cerrado under pressure as fires continue to burn in the vicinity of silos
Widespread fires in Brazil have been the center of media attention for yet again this year. Unlike the Amazon and Pantanal biomes, the Cerrado has seen 9 percent fewer fires from July-September 2020 compared to last year. However, in an analysis conducted by Chain Reaction Research, soy traders operating in the Cerrado biome have thus far experienced roughly the same number of fire alerts within a 25-km vicinity of their silos as in 2019. Although an approximate method, this calculation has been used to quantify the risk of fires in soy supply chains. Furthermore, financial risks of exposure to deforestation and fires in supply chains are likely to intensify with increasing pressure from European investors and a recent report that the climate costs of a EU-Mercosur trade deal would outweigh its benefits.
The Matopiba region: A focal point for Brazilian soy production
The current hotspot for soy cultivation in Brazil is the Matopiba region, comprised of Maranhão, Tocantins, Piauí, and Bahia states. The Matopiba region is home to the majority of the Cerrado’s remaining vegetation, and, conversely, among the highest deforestation and fire rates in Brazil. The region experiences large annual fires during dry season, due to both natural causes and agricultural expansion.
Deforestation in the Cerrado has been rampant: As much as 80 percent of natural vegetation on soy plantations in this biome can be legally cleared, compared to the 20 percent allowed in the Amazon under Brazilian Forest Code. Even though the 2006 Amazon Soy Moratorium was successful in reducing soy-driven deforestation and fires in the Amazon, many soy producers have since moved into the Cerrado and have been resistant to similar measures being enacted in that region. The Cerrado now produces roughly 60 percent of Brazil’s soy, about 20 times the amount produced in the Amazon.
This year, large fires have been detected in Caracol Agropecuaria properties (formerly Harvard) in the state of Piauí. Chain Reaction Research (CRR) has previously detected fires in farmland owned by Harvard University’s endowment fund and the Teachers Insurance and Annuity Association (TIAA) in the Matopiba region.
Registered fire alerts within potential buying zones of Brazilian soy traders
To understand the risk of fires within the supply chains of major soy traders, CRR calculated the fire alerts registered within a 25-km radius of soy trader silos. Of course, soy traders may also supply from farms outside of this radius. As shown in Figure 1, overall fire alerts were relatively flat year-over-year, indicating that major soy traders continue to merit rigorous risk management engagement and monitoring by investors. In the wake of a particularly severe 2019 fire season and international pressure from the investment community, the risk to soy traders remains elevated. 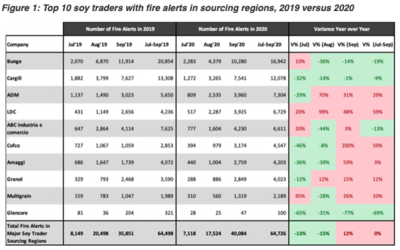 Source: Chain Reaction Research visual based on VIIRS data
Bunge and Cargill still have the highest risk of experiencing fires in farms within their vicinity. However, both companies have decreased supply chain fire risk since last year: 19 percent fewer fires were registered near Bunge silos and 9 percent fewer fires were registered near Cargill silos. Conversely, fire risk at ADM and LDC has significantly increased since last year by 29 percent and 59 percent, respectively, due in large part to an uptick in fire alerts in the state of Mato Grasso.
Fire alerts in context: Soy traders’ response to fires and deforestation
Thus far in the 2020 fire season, 36,324 fire alerts have been registered in the vicinity of Bunge, Cargill, and ADM silos. In the absence of clear policies around prohibitions of deliberate burning for soy production in the Cerrado, along with public traceability of supply chains, soy traders continue to experience elevated financial risks related to fires within sourcing regions. While companies have made improvements in traceability of direct suppliers, the prevalence of legal deforestation in the Cerrado and the long timelines outlined for achieving company zero-deforestation goals have slowed progress.
Bunge, for example, announced that it now monitors all direct suppliers across over 8,300 farms within the Cerrado biome, but its goal for reaching its zero-deforestation commitment was pushed out to 2025. Cargill pledged to contribute USD 30 million to develop solutions that reduce deforestation within the Cerrado, while publicly saying it was against the proposed soy moratorium in the region. ADM, which first announced a zero-deforestation policy in 2015, has joined Cargill, Bunge, Louis Dreyfus Company, Glencore Agriculture (rebranded as Vittera in 2020), and COFCO International in developing a common framework for supplier traceability in high deforestation and fire risk regions through the Soft Commodities Forum. However, as the Brazilian Forest Code permits extensive legal deforestation in the Cerrado, soy traders are still not incentivized to publicize sourcing records, thus inhibiting more granular analysis and mitigation of fire risk.
Against this backdrop, soy traders could face market access risk and financing risk from lagging efforts to reduce fires and in view of their zero-deforestation policies. As traders are highly dependent on bank loans and other financial services, often from European banks with zero-deforestation policies, banks may use their increased leverage for engagement. Downstream companies, including fast moving consumer goods companies like food retailers, restaurant chains, food companies, and home & personal care companies, are exposed to reputation risk as well as regulation risk. The reputation risk could lead to a material impact on a company’s market capitalization. Finally, regulation risk related to due diligence laws and regulation developing in EU countries is increasing, and as such, European financiers with zero-deforestation policies may be first to engage.