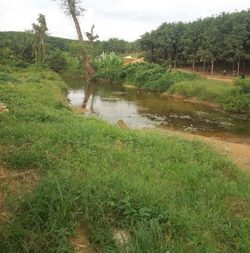 
Power dynamics of multinational corporations in Liberia
By William Selmah and Edwin Fayiah, III
Latest research conducted by the Public Trust Media Group on SOCFIN rubber plantations (SRC and LAC) has documented gross human rights violations.
SRC, Salala Rubber Corporation is based in Weala, Margibi County east of Monrovia while LAC, Liberia Agriculture Company is based in District # 3, Grand Bassa County southeast of Monrovia.
The abuses include mass land seizures and displacements of indigenous, destruction of sacred heritage and livelihood sites. SRC looks more or less like a protected security zone, where agents are posted in villages and on the plantation looking out for anybody (strange) that appears to be seeking information of any kind.
SOCFIN is an internationally active plantation group, which is headquartered in Luxembourg, Europe with headquarters with colonial roots. Socfin takes care of trade and plantation management through two subsidiaries, which are based in Fribourg, Switzerland
All of the corporate abuses at SRC and LAC are being committed against heirs of the land inhabitants in most instances without prior knowledge or compensation.
Entire towns have been leveled to make way for plantation expansions leaving inhabitants in misery, with their livelihood sources already destroyed.
“They brought in bulldozers and dismantled all that belonged to us,” said Monue Stanley, an executive of the Yeagbahmah Congress for Human Rights (YNCHR), a local advocacy group for affected communities in SRC.
The study titled, The Power Dynamics of Multinational Corporations: The Case of SOCFIN Group in Liberia, also established unresolved disappearances at SRC and LAC, with the latest being a two day old infant who went missing from company’s hospital facilities with culprits yet to be identified.
In the case of SRC, the victim (William Siafa’s) decayed body was found in a nearby creek stuck under a tree after the security guard went missing on job days earlier.
Also at SRC, a child went missing in a pandemonium that greeted a security raid on the parents’ home in an apparent attempt by company guards backed by state security to nab them over disturbances in the plantation. She was later found dead in a well with slippers before the well. The child’s father (Abraham Pennie) is an outstanding critic of the SRC management and also an executive member of the YNCHR. He told researchers that blood was drained from the girl through the neck.
During the course of this research, several attempts were made to have top management representatives of both sides speak to some of the issues raised by local communities and rights groups, but to no avail. Some vocal members of the communities like Edwin Garway even had to go underground for some time.
They could not pick up calls once you identified yourself as a journalist seeking some information.
The indigenous people’s troubles began after SOCFIN received a $10m loan to expand the plantations.


The study also established that the two companies have a shared pattern of operation: they have absolutely no regard for communities they have inflicted so much damages on; they exhibit recalcitrant postures. There is a general feeling that the company’s blatant violations and abuses of locals are backed by both previous and current governments.
“LAC is wearing the government’s cap and the government is wearing LAC;s cap. When you go against LAC, you have gone against the government,” said Dr. Albert Karnger, founder and Chairman of the Resilient Council of Elders, a pressure group in LAC affected areas.
Besides, rights groups advocating for just benefits for affected communities are all considered enemies of SOCFIN companies in Liberia.
Another commonality between SOCFIN companies in Liberia, the research found, is that they prefer keeping all of their deeds shady. They won’t speak to the media unless embedded or through their corporate communications consultant.
On the other hand, a two-day-old baby disappeared in LAC hospital facilities also during the same year and has not been found up to the time of the writing of this story. It is the same LAC where two European nationals (Belgian, German) have been gunned down within the space of 10 years.
Research report: “SRC looks more or less like a protected security zone, where agents are posted in villages and on the plantation looking out for anybody (strange) that appears to be seeking information of any kind. They look to eavesdrop on conversations with the view to picking up anything deemed unfriendly to the company’s interest.”
Attempt to thwart research
Our sources even informed us that plans were afoot to attack the research team: something that caused us to change tactic.
Survey also found that: “There is some degree of trauma being experienced by people from affected communities not mainly owing to destruction of crops, towns, villages, etc; but the erasure of landmarks around which their childhood and current memories are built such, where they fetched water, sacred sites where they performed communal rites, burial sites and several others”.
For example, a man took us near what was once his ancestral village, in Lango-ta, traces of which have been completely lost to the rubber plantation.
William Bainda, pointed to the spot his mother’s grave laid, now covered by rubber trees. When you talk with them, the loss of those parts of their history appears to hurt more than the crops and ordinary buildings.
Our team meanwhile, reached out to the newly established Land Authority to check if the conflict between SRC and the community dwellers in the concession area has claimed their attention. Surprisingly, Mr. Othello Mason who says he is the responsible official for concession land said the matter has not been brought to them. Asked whether government was concerned about the running tension between the company and the communities, he said it should be concerning but that the people have not made their concerns official.
According to Mason, if they had done so, the National Bureau of Concessions (NBC) would be on top of such complaint and then there would a meeting between the two agencies to the effect. He encouraged the affected communities to make their grievances official.
But contrary to Mason’s call for the affected communities to formalize their complaints, the Liberian government has actually been seized of the situation at SRC at some point. In 2014, “The Government and local environmental group Green Advocate have agreed to investigate the standoff between the Salala Rubber Corporation (SRC) and villagers in the company’s concession area.” A local news outlet, Global News Network (GNN) quoted the Liberia News Agency, as reporting that “Deputy Internal Affairs Minister for Administration, Varney Sirleaf made the disclosure at a meeting in Gorgbor Town.” That same story asserts that “Deputy Executive Director of the National Bureau of Concession, Dixon Yarsiah, called on the villagers to remain calm while government looks into their problem.”
What’s needed to win communities confidence
The study has advanced several recommendations including the need for SRC and LAC to try to win the confidence of affected communities by proving in words as in deeds that they are truly committed to addressing issues bordering on losses they (affected people) sustained, in the wake of expanding the plantations, as raised in their complaint.
It is also recommending that companies stop using surrogate groups to engage affected communities in the name of representing affected communities. This only further angers indigenous people, exacerbates the conflict and narrows any window of opportunity for a win-win resolution.
Also highlighted in the recommendations is the urgent need to enhance security environment by avoiding clamp downs on voices of dissent.
There is a widely held belief that Liberian governments (past and present) have been supportive by their constant silence. Some government people spoken to denied knowing about what is going on at the two rubber plantations, contrary to the available evidence.