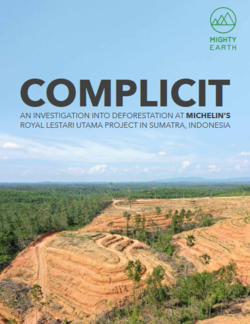 The report's executive summary is available in French and Indonesian Bahasa.
A new report released today  by  environmental  campaign  group Mighty Earth alleges that Michelin, the world’s largest tire company, was complicit in and covered up industrial-scale deforestation of over 2,500 hectares of rainforest in the run-up to the launch of its flagship ‘eco-friendly’ sustainable natural rubber joint venture project in Sumatra, Indonesia. The project, undertaken in partnership with a company described as ‘within the Barito Pacific Group’, is currently seeking an additional $120 million in investment from green financiers.

Evidence in the new report shows some 2,590 ha of rainforest – over seven times the size of New York’s Central Park, or equivalent to the size of central Paris – was industrially deforested by subsidiaries of Michelin’s Indonesian joint venture partner in a 33-month period to January 2015 to make way for natural rubber plantations in the flagship rubber, wildlife and conservation-focused Royal Lestari Utama (RLU) Project in Jambi, Sumatra. Of this total, Mighty Earth also found 1,298 ha of rainforest was industrially deforested in a Wildlife Conservation Area, and which is now planted with thousands of rubber trees under the RLU Project.

France-based Michelin Group is the world’s largest tire company, and natural rubber is the key ingredient in the vehicle tires that it manufactures and sells worldwide. The RLU Project has since gone on to attract financing from Asia’s first $95 million corporate sustainability ‘Green bond’, as well as public funds from the Norwegian, UK and US governments, and is imminently slated to receive further financing from a second $120 million green bond.

“This is a major deforestation scandal,” says report author Alex Wijeratna, Campaign Director at Mighty Earth. “Our evidence shows thousands of hectares of wildlife-rich rainforests were industrially deforested in Jambi in the run-up to the agreementof the RLU Project in late 2014. Michelin knew about this terrible forest destruction, they didn’t do enough to stop it, and instead chose to provide green cover to the project in order to attract green bond investors that have since sunk millions of dollars into the scheme.”

Michelin publicly announced its 88,000-hectare joint venture RLU Project in May 2015, with an Indonesian company later officially described as ‘within the Barito Pacific Group’. At the time, Michelin said the Jambi concession area was “…ravaged by uncontrolled deforestation”, blaming outside culprits such as encroachers, migrants and organized criminal groups.

In contrast, Mighty Earth’s report alleges that it was Michelin’s joint venture partner itself – RLU's subsidiary on the ground known as PT Lestari Asri Jaya (LAJ) – that perpetrated much of this destruction through industrial forest clearance, particularly within a block of the concession known as LAJ 4. The new publication, Complicit: An Investigation into Deforestation at Michelin’s Royal Lestari Utama Project in Sumatra, Indonesia, shows that, in April 2012, there were 3,966 hectares of intact forest covering almost the entire case study area within LAJ 4. By the time the RLU joint venture project began in January 2015, just 138 hectares of that forest remained. Analysis by Mighty Earth of high-resolution satellite images points to large-scale rubber planting replacing this natural forest.

Mighty Earth has been in talks with Michelin and RLU in Indonesia about its research in Jambi since September 2019, and has requested for several key social and environmental due diligence documents and reports conducted prior to the project launch to be made publicly available. The companies have repeatedly turned down Mighty Earth’s requests, despite the fact that public funds have been used to back the project.

The campaign group did manage to view one of these confidential pre-venture assessments, and say it confirms that Michelin was clearly told what was happening on the ground in Jambi at the time.

"Mighty Earth has seen a confidential report commissioned by Michelin that shows the company knew deforestation in the PT LAJ concessions was partly the result of land clearing carried out by PT LAJ itself,” says Wijeratna. “The report includes geo-tagged photos of LAJ bulldozers clearing land and forests next to the Bukit Tigapuluh National Park, but it’s unknown if Michelin ever shared this information with donors, funders, or green bond investors."

“Public and private investors in these new so-called ‘green bonds’ or ‘sustainability bonds’ have so far pumped nearly $100 million into the RLU Project in Indonesia in good faith, and will soon be asked for $120 million more,” says Wijeratna. “We’re calling for an independent investigation to get to the bottom of the murky business during the run-up to this so-called green rubber project, and believe the second ‘green bond’ offering shouldn’t go ahead until all the facts about what happened in Jambi are in the public domain.”

The opaque due diligence and community consultation processes also continue to have ongoing social ramifications in Jambi. “Farmers reported land tenure conflicts with RLU’s local subsidiary on the ground,” says Fenna Otten from the University of Göttingen’s department of Human Geography, who conducted field research in nearby Muara Sekalo village in 2017. “Villagers said they had no choice but to leave their land to the company. They were pushed off and felt powerless. Michelin shouldn’t gain green bond finance and public praise for this sham of a sustainable development project.”

In mid-September, local communities again protested what they say are unfair landgrabs carried out to establish the RLU project, holding a demonstration in Tebo, Jambi. “You can’t stop deforestation and land grabbing unless you know who’s responsible,” says Wijeratna. “It’s part of a broader transparency problem with Michelin and the rubber industry as a whole. Michelin won’t even reveal what companies it sources its rubber from. If Michelin is to live up to its stated zero-deforestation and human rights aspirations, it needs to come clean about what happened in Jambi, and use its industry leadership position to become a champion for greater transparency across the whole rubber supply chain.”

The report's executive summary is available in French and Indonesian Bahasa.