JAKARTA — The Indonesian government is doubling down on a plan to establish large-scale agricultural plantations across the country, in a move that threatens widespread deforestation and the disenfranchisement of smallholder farmers.

President Joko Widodo announced the expansion of the “food estate program” on Sept. 23 as part of measures to secure domestic food supplies end Indonesia’s reliance on imported food crops. Among the regions expected to become agricultural centers are the provinces of North Sumatra and South Sumatra in the country’s west, and East Nusa Tenggara and Papua in the east.

In Central Kalimantan, the government has identified 165,000 hectares (407,700 acres) of potential farmland in the districts of Pulang Pisau and Kapuas. Most of this new estate will sit on peatlands that were targeted for an identical initiative, the Mega Rice Project (MRP), in the mid-1990s. The government back then quickly abandoned the MRP after the nutrient-poor peatlands proved too unforgiving for rice, a crop that requires the kind of mineral soils found in Java and Bali islands to thrive.

The Widodo administration has called for reviving the  former MRP areas, albeit with changes in light of the lessons learned from the failure of that earlier project. Construction work aimed at improving existing infrastructure, such as roads and irrigation channels, began on Sept. 28. The cost of infrastructure alone is estimated at 6.7 trillion rupiah ($454 million). 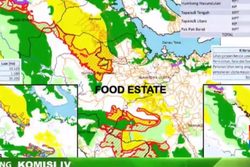 A map of the planned food estate in North Sumatra, Indonesia. Image: Ministry of Environment and Forestry.

In North Sumatra, the government is eyeing 61,000 hectares (150,700 acres) of land on a plateau that straddles four districts. It says the elevation makes the region well suited for crops like potatoes and garlic, and that if the project succeeds there it can be replicated in other regions such as Papua, which has a vast highland region.

It wants agribusiness companies to take the lead in the project, citing the high cost of establishing large-scale plantations, even as one of the program’s stated aims is to empower small farmers and rural communities.

Dana Prima Tarigan, head of the North Sumatra chapter of the Indonesian Forum for the Environment (Walhi), said farmers would only benefit from the program if they were granted ownership and management rights over their own land. Anything short of this will make the program no different from past large-scale plantation programs, in which companies managed the estates and hired farmers only as paid laborers, Dana said.

Five companies, including food giants such as PT Indofood Sukses Makmur and PT Calbee Wings Food, have expressed their interest in taking part in the program. Nearly 80% of the 1,000 hectares (2,500 acres) of land expected to be planted this year in North Sumatra will be managed by agribusiness companies and the government.

The government is also looking abroad for investors in the program. Defense Minister Prabowo Subianto said there was already interest from South Korea, the United Arab Emirates, Qatar and China.

The government initially planned an estate of 30,000 hectares (74,100 acres) in the district of Humbang Hasundutan, but an analysis by the Ministry of Environment and Forestry found there was only 19,000 hectares (47,000 acres) available, with much of the remaining land designated as protected forests that serve as a catchment area for Lake Toba.

The ministry has had to look at the neighboring districts of North Tapanuli, Central Tapanuli and West Pakpak, where it has identified a total of 61,000 hectares of available land. That number is subject to change pending a rapid environmental strategic analysis and forest conversion process.

Another factor restricting the amount of available land for the food estate project in North Sumatra is the sheer size of an existing concession held by pulp and paper producer PT Toba Pulp Lestari (TPL): nearly 185,000 hectares (457,000 acres) of land — an area bigger than London — across 11 districts and one municipality.

The company has been embroiled in long-standing land conflicts with Indigenous Batak communities in the Lake Toba region, who have lost their benzoin trees, an important source of incense and central to their culture and livelihoods. The conflicts have resulted in the jailing of several Indigenous community members.

With TPL’s pulpwood concession occupying such a large area, Darori Wonodipuro, a lawmaker who served as the head of the forest protection directorate-general of the forestry ministry for seven years, said that there might not be enough land left for the food estate program.

“The location there has cool temperature but the land has been handed over completely,” he said during a meeting with the Ministry of Environment and Forestry in Jakarta. “First, it is owned by Indo Rayon [the former name of TPL], these are all forest areas. Outside of that, they’re all customary land.”

Dana from Walhi said the government should use the opportunity presented by the food estate program to rescind these disputed areas from TPL and hand the land back to the Indigenous communities to manage, which could then feed into the food estate program.  “We would see it as a good policy if [the government] reduced the concession of the company,” Dana said. “But don’t give [the area] to new companies to manage, because then the Indigenous peoples will have to watch [from the sidelines] again.”Environment and Forestry Minister Siti Nurbaya Bakar said the impact of the food estate program on the environment in North Sumatra would be minimal, since the earmarked areas comprise degraded forests.

“What’s important here is that in regards to the environment, [degradation] can’t happen,” she said. “So indeed the areas that we project [to become food estate] are those whose forest functions have declined. But of course the agricultural practices have to be agroforestry. There have to be conservation requirements.”

The Papua region at the easternmost end of Indonesia is the country’s least-developed area and home to the world’s largest standing swath of tropical rainforest outside the Amazon and the Congo Basin. President Widodo’s announcement that Papua would be included in the food estate program has prompted objections from a coalition of 10 Papua-based NGOs, who say the program will rob Indigenous Papuans of their rights.

The coalition likened the program to the failed Merauke Integrated Food and Energy Estate (MIFEE), initiated by Widodo’s predecessor, Susilo Bambang Yudhoyono, in 2011 to turn Papua’s Merauke district into the “future breadbasket of Indonesia.”

That project, pitched by the government as the answer to Indonesia’s food security needs, has become a “textbook land grab,” activists say. Within just three years of the project’s launch, the majority of concessions granted by the government to companies were for crops to be exported, such as oil palm and pulpwood, belying the claim that the estate would boost domestic supplies of food crops. The latter, including rice and cassava, only account for 70,000 hectares (173,000 acres) of total concessions in the estate, compared to 594,000 hectares (1.4 million acres) for pulpwood and 266,000 hectares (657,300 acres) for oil palm.

“In the beginning, [MIFEE] was planned to be dominated with food crops like rice, corn, soy and others, [but] the fact is that now it’s dominated with palm oil and industrial forest plantations,” Aiesh Rumbekwan, executive director of Walhi’s Papua chapter, said in a press release.

In total, the government has granted permits for 45 companies on 1.3 million hectares (3.2 million acres) of land in Papua — an area that includes not just land where farming is permitted, but also where it’s off-limits, including primary and protected forests, residential areas, and Indigenous settlements.

With the project threatening their customary rights and livelihoods, Indigenous communities in the region have resisted by staging street protests, installing signs around plantations urging companies to leave, and occupying company offices, among other actions.

The resistance has slowed MIFEE’s expansion, but President Widodo has tried to revive the project ever since taking office in 2014. In 2015, the president said he planned to turn the Papua region into the nation’s rice bowl over the next three years by allocating 1.2 million hectares (3 million acres) of land, and possibly up to 4.6 million hectares (11.4 million acres), in Merauke district for the project. The latter figure represents the entirety of Merauke’s area.

Since then, however, there’s been little to no development on the MIFEE program, which is included in the Widodo administration’s list of national strategic projects.

With the president now targeting Papua again under the national food estate program, the Ministry of Environment and Forestry is conducting a study to identify potential areas not only in Merauke, but also in the neighboring districts of Mappi and Boven Digoel.

Asked by lawmakers at a parliamentary hearing whether the planned food estate would be established in the former MIFEE area, Environment and Forestry Minister Siti said it hadn’t been decided yet because the study is still ongoing.

According to a document obtained by Mongabay, the government has identified nearly 1.7 million hectares (4.2 million acres) of potential plantation area in the three districts. There’s also 1.04 million hectares (2.57 million acres) of forest that could be degazetted — stripped of its forest status — and subsequently razed for farmland by 2021. Mongabay has tried to confirm the validity of the document with the Ministry of Environment and Forestry, but to no avail.

The expansion of the food estate program to districts beyond Merauke has sparked concern among activists in the region, who worry the impact of the new program will be greater than that of MIFEE.

Walhi Papua’s Aiesh said the food estate program would not only threaten the region’s pristine rainforests, but also the Indigenous peoples who live there and call the forests their ancestral home.

“There’s already a lot of stories from Merauke documented by researchers and reporters on how deforestation has changed the nature of the Malind Indigenous peoples and how their land ownership has shifted to other parties or been forcefully taken away by legal papers issued by the government,” he said.

Sabatha Rumadas, from the NGO Papua Peoples Network (JERAT), a member of the coalition opposed to the project, said if the government truly wants to achieve food security and empower native Papuans, then establishing large-scale food plantations is not the solution. Instead, the government should recognize Papuans’ land rights and give them power to manage their own land, he said.

“There are empirical facts that before the integration [of Papua into Indonesia], Indigenous Papuans were able to survive not because the state guaranteed their livelihoods, but because of the availability of food and access to manage it,” Sabatha said.

Anselmus Amo, a pastor with the Papuan Indigenous rights organization SKP-KAMe, said that if the government wanted to develop agriculture in the region, it should involve Indigenous Papuans in the process and conduct a meaningful dialogue with them.

“Indigenous peoples also have a framework to secure their customary land for the sake of their children and grandchildren,” he said. “So there shouldn’t be coercion, especially with violence.”