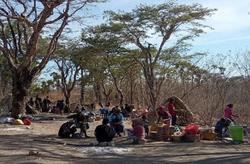 People trying to stop expropriations approved by the authorities for plantations, ports and other maritime structures endure intimidation and arrests. The Church is helping victims. Offers of compensation for seized land is pitiful. The authorities are working in league with foreign groups.
The Indonesian government has major plans to develop strategic infrastructures and agricultural projects, but for farmers, fishermen and indigenous communities, this represents a threat to their livelihoods, food, water, and even homes.

Attempts to stop seizures and expropriations approved by the authorities to develop plantations and build ports or other maritime structures have been accompanied by acts of intimidation and arrests of those opposed.

In several Indonesian cities, dozens of people have been arrested in recent protests against an omnibus bill designed to boost investments by weakening environmental protection and facilitating land acquisitions.

Despite the pandemic, Indonesian small-scale farmers have been able to support their communities, but seizures and expropriation have made them "refugees in their own land", said Dinda Nuur Annisaa Yura, president of Solidaritas Perempuan (Women’s Solidarity), a human rights organisation.

In East Nusa Tenggara province, home to the famous Komodo dragon lizard, dozens of indigenous families who live in the Pubabu forest were driven out in August, forced to sleep outdoors until a local church provided them with shelter. A video showing the abuses against them attracted public attention.

A local woman, Martheda Esterlina Selan, aka Mama Ester, told the authorities to move her and other Basipae indigenous people "out of the country" if they can prove that the seizure of their customary lands has a legal basis.

“We guard [this land] so that no one damages the forest,” Mama Ester said in a recent webinar, noting that her community now can no longer look for tamarind and honey to sell.

Lawyers say that locals have long proven ownership of the land, but some are wondering if a "land mafia" is influencing decision-making.

The authorities reply that the new projects have created hundreds of jobs, growing medicinal plants like Kelor (Moringa oleifera) and trees for firewood (lamtoro).

The same pattern was replicated in northern Sumatra. According to press reports, dozens of local indigenous people said they were attacked by security guards from a state-owned plantation company, as well as police and military personnel.

For the People's Alliance of the Archipelago, the clash in Langkat Regency was a warning for 500 families to leave a 117-hectare area set for sugar production.

In southern Sulawesi, the Coalition to Save the Seas of Indonesia asked the Indonesian and Dutch governments to stop land seizure for the expansion of the Makassar New Port container terminal, which will displace 5,000 people.

The Dutch-based dredging company that won the contract said that it has provided “environmentally sustainable solutions” for the development of maritime projects in 90 countries.

Authorities claim that locals have accepted the compensation package, something that the latter deny.

According to project managers, the development of the facility has already reduced queues in loading and unloading operations from 2-3 days to 24 hours, and is expected to cut logistics prices by 30 per cent.

For their part, fishermen in the capital have protested against plans to develop a new port facility and large dam to prevent flooding.

In addition to paying more for their drinking water, the plan would increase their fuel costs since they would be forced to sail further out to sea to find fish.