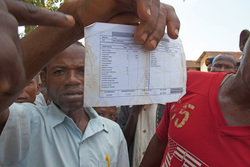 In November 2018, RIAO-RDC filed a complaint against Feronia Inc on behalf of nine communities in DR Congo. (Photo: Argia)

The remains of assassinated Congolese leader Patrice Lumumba are finally on their way back home from Belgium. But this brings no closure to the anti-colonial struggle he led and was ultimately killed for. Foreign powers continue to loot the Democractic Republic of the Congo (DRC), and, on the oil palm plantations the Europeans erected over a century ago, even the cruelties of King Leopold's sadistic reign are alive and well.

A Belgian manager at one plantation in the northern Equateur province recently reinstated the old practice of publicly whipping villagers accused of stealing palm nuts from the company's plantations. The villagers, who the manager openly calls "macaque monkeys", are terrified of speaking out. Last year, two of the company's security guards accosted a local land activist on his small boat and brutally beat him to death, and both guards are today walking freely in the villages, continuing to terrorise people.

Who's behind this ghastly operation? Well, if you live in Western Europe or the US, it's likely that you may have something to do with it. The company, Plantations et Huileries du Congo (PHC), is owned and bankrolled by some of the biggest development finance institutions (DFIs) in Europe and the US, including those of the UK, Belgium, France, Germany, the Netherlands and Spain. Over the past seven years, these public institutions wasted around US$200 million trying to salvage the crumbling 100-year old colonial operation, which was taken over from Unilever by a now bankrupt Canadian financial company called Feronia Inc in 2009.

US$200 million could have made a huge difference to the communities whose 100,000 ha of lands have been occupied by these plantations for over a century. It could have been used to build badly needed infrastructure and health services. But instead, the public funds were placed in the hands of development bank money managers tasked with helping Africans by funding multinational companies extracting resources from their communities. Much of the funds were wasted on lavish executive salaries for European company managers, travel expenses, legal teams, consultants and payouts to a powerful DRC politician. Promises to pay workers minimum wages and provide them with decent housing and medical services never materialised. The argument could be heard that the money wasn't there for these investments while millions were available for paying the salaries of the expat company managers based in London and Kinshasa. The local communities, whose lands and forests were stolen by the company, remain desperately poor and hungry for land.

In June this year, after reporting yet another year of multi-million dollar losses, Feronia suddenly announced that an agreement had been reached with its development bank owners to hand Plantations et Huileries du Congo over to a private equity fund. That fund is based in the tax haven of Mauritius and managed by Kalaa Mpinga, son of a former DRC prime minister and a major player in Africa's gold and diamond mining scene.

The UK development finance institute, the CDC Group, Feronia's largest shareholder, justified the hand-over of its shares to Mpinga's company by saying it would reduce the expenses involved in keeping the company listed on the Toronto Stock Exchange. Anyone familiar with private equity funds, as the CDC managers are undoubtedly aware, knows that the modus operandi of private equity is to maximise fees, leverage debt and strip assets. The voluntary (and not publicly available) commitment on environmental and social governance that the CDC and the other development banks say they got from the private equity firm offers no meaningful protection to the people of the Congo who will be affected by the new owner's predations.

The CDC is said to have written off upwards of US$50 million by handing over its shares to Mpinga's private equity firm, while other European development banks are accepting to forego up to 80 percent of their outstanding loan repayments.

This private equity take-over is the development banks' desperate attempt at an "exit". Development banks, like other investors, are supposed to exit after having made a profit and, in their case, they are supposed to at least show that some concrete "development" has taken place. Neither applies to Feronia. The banks are exiting because there is no end in sight of company losses and because tensions with the workers and local communities, who are fed up with starvation wages and the theft of their lands and forests, are growing out of control.

Handing PHC over to a private equity firm will not resolve this situation or bring "development" to the communities. If they had wanted to achieve this, the development banks could simply have handed the company's lands and plantations over to the local communities. There are hundreds of community palm oil mills operating near to the PHC plantations, and their business is booming. Indeed, some communities have already started to reclaim and put into production portions of plantations that are not being used by PHC.

The Feronia "exit" lays bare the complete lack of accountability with development banks. Since they first got involved with Feronia in 2013, numerous letters and communiqués were issued by the communities and reports published in the media and by NGOs, filled with serious allegations about the company's treatment of workers and communities, its human rights violations, illegal occupation of lands and its destruction of the environment. The DFIs did nothing significant to improve the situation, and even acted to undermine community efforts to hold the company to account. Over the course of the past year, the DFIs took no action to sanction the company when two of its security guards attacked and killed a member of the local organisation RIAO-RDC, which has been supporting the communities to fight for their lands. Nor did they intervene when several community leaders active in the land struggle were arrested on artificial charges by a group of police officers travelling in a company vehicle. The village leaders were detained for months in jail without charges, while the company finished the contested planting of new oil palm blocks around their community.

Development banks cannot be allowed to walk free of this disaster. At a minimum, there needs to be an independent and transparent investigation by lenders into the murder of the RIAO-RDC land defender and all the other human rights and environmental violations committed by Feronia Inc and its subsidiary PHC during the time in which the development banks were financially involved in the company. The development banks should be held responsible for these violations and damages must be paid to those in the DR Congo who were affected by them. The Feronia case, and other development bank investment failures, shows that there is a need to overhaul DFI practices and to consider whether it might be better to just shut them down entirely.

The other basic action that must be demanded of the DFIs in the Feronia case is the restitution of lands to the communities. Nine communities in the DRC have already filed a complaint to the German Investment and Development Corporation (DEG) that was accepted by the bank's Complaints Mechanism. That mediation process is underway but has been hampered by a serious lack of financial support for the communities and for the local organisation assisting them with the process, as well as by the situation of insecurity on the ground perpetrated by the company. The DEG and the other development banks are still tied to PHC through debt, with mortgages to PHC's lands as collateral. But with the company now owned by a private equity fund, it will be even more difficult for the communities to ensure the company's goodwill in a mediation process.

Feronia is certainly not the only disastrous investment by European and US development banks. There is a long and growing list of such cases. But the Feronia debacle must be the last.