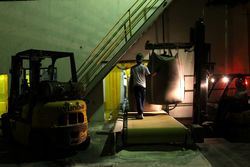 
Louis Dreyfus in talks to sell stake to Abu Dhabi’s ADQ
By Andy Hoffman, Dinesh Nair, and Nicolas Parasie
Louis Dreyfus Co., the storied agricultural trader controlled by billionaire Margarita Louis-Dreyfus, is in talks to sell a stake in the firm to Abu Dhabi sovereign wealth fund ADQ, potentially opening the family company to outside ownership for the first time in its 169-year history.
A successful deal would give the trading house an injection of much-needed cash as its controlling shareholder seeks funds to pay down loans, according to people familiar with the talks.
For ADQ, formerly known as Abu Dhabi Development Holding Co., acquiring a minority stake in one of the four largest traders of grains, oilseeds and sugar could boost food security for the United Arab Emirates, amid concerns brought on by disruptions caused by the coronavirus pandemic.
Louis Dreyfus Co., or LDC, declined to comment. A spokeswoman for ADQ wasn’t immediately available to comment.
The talks are ongoing, a deal has yet to be finalized and the discussions could still fail, the people said, asking not to be named because the information was private.
Declining Profits
Margarita Louis-Dreyfus has been seeking cash ever since she took out about $1 billion of loans to buy out other family members and take control of the firm. Meanwhile, the trading house has been forced to cut costs and jobs as profits declined due to an abundance of crops and a lack of price volatility that traders crave.
In 2019, LDC was looking for equity investors to expand its geographical footprint. That initiative stalled earlier this year as sovereign wealth funds, other trading houses and private equity investors balked at valuations, and the logic of taking a minority stake.
The Covid-19 pandemic and resulting food security concerns have helped revive interest in LDC, which represents the ‘D’ in the quartet of the biggest agri-traders known as the ‘ABCDs.’
In June, ADQ held talks with banks to raise loans to finance an acquisition spree that included buying a 50% stake in agricultural business Al Dahra Holding Co.
Management Shakeups
A successful deal would underscore government desire to strengthen food security via agri-trading businesses. Cofco Corp., China’s biggest food company, spent billions on acquisitions to create a global trading arm called Cofco International Ltd. In addition to state-controlled Cofco, CIL investors include Singapore’s Temasek and China Investment Corp.
Rotterdam-based LDC has endured a series of management shakeups in recent years, including announcing on the same day in 2018 that its chief executive officer and chief financial officer would depart.
Three-decade company veteran Ian McIntosh, who took over as CEO after those surprise resignations, is retiring this month and will be replaced by Chief Operating Officer Michael Gelchie.
Many of the company’s challenges originate in its ownership structure. Margarita Louis-Dreyfus controls more than 96% of the holding company that owns LDC, called Louis Dreyfus Holding BV. Its equity value has been falling as it continued paying big dividends while profits dwindled.
Archer-Daniels-Midland Co., Bunge Ltd. and Cargill Inc. are the other members of the grain trading giants known as the ‘ABCDs.’