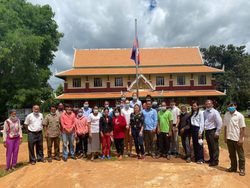 Monday, 10 August 2020 marked an important day for indigenous communities from Busra commune in Cambodia as they signed an agreement with the rubber company Socfin Cambodia to settle a long-lasting dispute about their communal and spiritual lands.

An official ceremony was held at the Pichreada district hall in Mondulkiri province. The representatives from three villages, Pu Char, Pu Lu and Pu Teut, and from the company signed an agreement concerning more than 500 hectares of land. The ceremony was attended by representatives from the district officials, as well as MRLG and the Office of the United Nations High Commissioner for Human Rights (OHCHR) who have been supporting the process.

Beyond the official agreement, the parties appreciated the mutual respect and trust built through the process and have confidence in future cooperation.

“Today, I am very happy to sign the agreement on communal land as a result of our past advocacy work. Although we have not used this the reserve land yet, we look forward to registering our communal land with the Royal Government of Cambodia for us and our next generation to use,” said Ms. Khleok Keosingieb, Pu Char community representative. “We have a strong hope that, in the future, the community and company can work closely for the development of the communities, particularly we will work together for the communal land registration” she continued.

The conflict between Socfin Cambodia and the local communities in Busra dates back to 2007-08 when the government allocated two Economic Land Concessions (ELC) to the company for a rubber plantation while the local indigenous communities lost their lands and were affected in multiple ways by the investment[1]. After years of attempts to compensate the villagers and address their grievances, the company and five communities agreed in 2016 to use a mediation process to discuss the remaining issues in a systematic manner.

“The signing of these agreements between the community and company representatives today highlights the importance of conflict mediation and builds the relationship between the parties.” Mr. Vanna Mab, Deputy District Governor of Pichreada district stated.

These first agreements about communal lands are the result of the mediation process facilitated by the Independent Mediation Group (IMG) and NGO Forum on Cambodia and supported by MRLG and OHCHR. The mediation is a voluntary collaborative process where the parties in a conflict meet together with the help of an independent mediator in order to discuss the issues, develop options, consider alternatives, and negotiate a consensual agreement or settlement. Further negotiation and agreements are expected as the mediation is continuing until the end of this year.

“We are happy to be here today for the signing ceremony. We believe that this mediation project can be an example to help other indigenous communities in Cambodia and outside the country, but also for companies, communities and other stakeholders facing the same challenges. For us, the process does not end today but we see this milestone as a foundation for the communal land titling process and we will support the communities as much as we can in this next step.” Mr. Jef Boedt, Socfin Cambodia General Manager said with determination.

In Mondulkiri, SOCFIN-KDC and five indigenous communities from Busra commune will sign an agreement to settle their dispute regarding communal lands affected by the rubber plantation.

Since 2016, MRLG is supporting the Independent Mediation Group (IMG) and NGO Forum on Cambodia to facilitate a process of mediation between a rubber company managing an economic land concession (ELCs), SOCFIN-KCD, and the local indigenous communities in Mondulkiri Province. The mediation is a voluntary collaborative process where the parties in a conflict meet together with the help of an independent mediator in order to discuss the issues, develop options, consider alternatives, and negotiate a consensual agreement or settlement.

In parallel, the local communities receive legal advice and training from Legal Aid Cambodia to ensure that discussions with the company can take place on an equal footing.

The conflict between SOCFIN-KCD and the local communities from Busra is the result of the allocation of two Economic Land Concessions (ELCs) by the government to SOCFIN-KCD since 2007-08 without acknowledging the rights of the local indigenous communities who were affected in multiple ways by the investment. After years of various attempts to compensate the local villagers and solve their grievances, the company and five communities have agreed to use the mediation to try to sole the remaining issues in a systematic manner. One of the expectations of these communities is that with the conflict resolved, they will be able to apply for the registration of their land under a community land title, and thus secure their land tenure.

Mid 2020 will mark one important step in the mediation with the signing ceremony of an agreement between SOCFIN-KCD and the communities that will settle all claims regarding the recognition of the community rights over remaining communal lands and set the final compensations related to communal lands that have been lost through the development of the plantation. The mediation is continuing in order to find a possible agreement to settle other remaining grievances and issues related to individual lands.