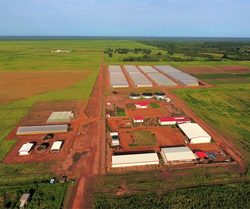 
Côte d’Ivoire agriculture project secures Atradius-backed financing
BY JOHN BASQUILL0
Bluebird Finance & Projects and KfW-Ipex Bank have finalised a €108mn deal backed by Dutch export credit agency (ECA) Atradius to construct four agriculture production and training centres across Côte d’Ivoire.
The scheme is devised by Green 2000, an Israel-headquartered company that specialises in agriculture projects. It involves the construction of four agriculture services and training centres, which provide land, facilities and machinery for producing fruit, vegetables, fish and other products.
As well as providing long-term training and education for farmers, Bluebird says the initiative will allow local communities to generate income and contribute to food security in Côte d’Ivoire.
Two of the four centres are based in the north of the country, in the towns of Guiembé and Kong, while the other two are further south, in Zikisso and Guitri.
Financing is provided by Frankfurt-headquartered KFW Ipex-Bank as lead arranger, with Bluebird acting as lead financial advisor. 85% of the value of the deal is subject to Atradius cover, with the remaining 15% sourced from the commercial market.
Ram Shalita, chief executive of Bluebird, says that undertaking an export finance project during the Covid-19 pandemic “required a lot of creativity from all sides”.
“Closing such a large deal, in the current global problematic atmosphere, was very challenging,” he tells GTR.
“But the export finance industry should remain reliable and predictable in turbulent times. This deal – which will provide food independence and advanced professional know-how for thousands of local people –  proves that important deals can happen and should happen even during times of crisis.”
Shalita says face-to-face meetings had generally concluded by the time travel restrictions were imposed around the world, but that flexibility was required in other areas, such as in the production of an environmental report that would normally follow on-site inspections by the financing parties.
“The whole situation of high volatility and high uncertainty is not good for banks or insurers, but I must say that Atradius and KFW Ipex-Bank showed a lot of flexibility here,” he adds.
The deal is not the first time Bluebird has advised on a deal backed by Atradius. In January 2019, the ECA provided 100% cover for an agriculture project in Zambia, which consisted of a US$47mn financing package extended to the country’s ministry of finance.
The previous year, Bluebird closed a complex deal involving four banks and two other European ECAs for the US$165mn construction of a new hospital, also in Zambia.
Bluebird says it has other deals in the pipeline elsewhere in the country, as well as in Ghana and Senegal, focusing on the agriculture, rail and healthcare sectors. The company says Green 2000 is also in the “advanced stages” of similar deals in Africa, Central America and the Pacific.
For the Côte d’Ivoire project, construction is estimated to take 36 months. Disbursements under the financing programme started in late August.