Raped off their land: hallowing tales of Kiryandongo evictees 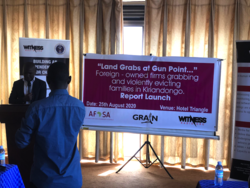 
Raped off their land: hallowing tales of Kiryandongo evictees

by Sadab Kitatta Kaaya
On April 20, Elizabeth Nafula travelled with a team of other human rights lawyers to Kiryandongo district, to collect testimonies from victims of the ongoing land evictions in the district.
She had interviewed about four women when the police arrived and arrested her together with her team and taken to Kiryandongo police station where they spent a night over charges of disobeying lawful orders, and intention to spread an infectious disease (Covid-19).
The women, who were being interviewed by the lawyers, are part of the group that claims to have been raped by a gang of men working for three multinational companies that have since 2012 been evicting people off a chunk of land measuring about 37.8 square miles to establish large scale commercial farms.
Agilis Partners, Kiryandongo Sugar Works Ltd and Great Seasons SMC Ltd are the companies behind the evictions that have left more than 35,000 people from 14 villages homeless.
Agilis Partners, a US company, is growing simsim (sesame), maize, sunflower, and soybean while Great Seasons SMC Ltd, a firm owned by Sudanese nationals is involved in coffee growing, and Kiryandongo Sugar Limited which supplies sugarcane to Hoima Sugar Works.
“There are hallowing stories of rape. Rape is one of the weapons being used to push people off their land. They [investors] use their guards to warn women of the possibility of getting raped if they remain on the land, and indeed they go ahead and rape them,” human rights lawyer Eron Kiiza said on August 25 during the launch of a report; Land grabs at gunpoint.
It was compiled through a collaborative effort by three civil society organizations; Witness Radio Uganda, Alliance for Food Sovereignty in Africa (AFSA) and a Barcelona, Spain – based international non-governmental organization, GRAIN.
“The evictors are sophisticated; they work with security agencies and private security guards to intimidate the locals, journalists and human rights defenders. That is how lawyers were arrested and detained at Kiryandongo police station,” Kiiza said.
The lawyers who were arrested belong to his law firm, Kiiza & Mugisha Advocates through which the evictees have filed various court suits against the investors.
“Torture and rape should never be used as a method of solving land problems in Uganda. What is disheartening is that some of these atrocities are carried out by an American company [Agilis Partners] which claims on its website to be feeding Africa yet in actual sense, they are using rape and torture to carry out the forced evictions in Kiryandongo while spreading propaganda about how they are feeding Africa,” Kiiza said.
Some of the women Nafula interviewed, had fresh wounds on their hands which they sustained during a scuffle with a gang that wanted to rape them. Two others, a 15-year-old girl and a 30-year-old woman gave birth to children whose fathers they don’t know.
Early in March, a woman was rushed to Kiryandongo hospital after the rapists left a condom stuck inside her, causing the swelling of her abdomen.
ONLY $78
According to the report, the evictees are forced to accept as little as $78 (Shs 300,000) as compensation for their land, and those that protested, like Stella Akiteng, the secretary for women at Nyamuntende village, were arrested and detained for more than a week over charges of inciting violence, malicious damage to property, arson and aggravated robbery.
For 83-year-old David Isingoma, when the evictors raided his Kisalanda village and ordered him to vacate, he asked his children to seek the intervention of the Kiryandongo resident district commissioner’s office, but to his surprise, they were arrested and detained at the police.
“I asked my children to find out from the RDC why we were being evicted. I was shocked later when I got a phone call informing that they had been arrested and taken to police,” Isingoma said during the report launch.
The father of 25 held about 100 acres of land at Kisalanda village which he has since lost. The last time he checked, his family graveyard had been razed. Besides the police, the report pins soldiers from the UPDF’s 4th division to be involved in the violent evictions.
“They robbed us before evicting us with guns,” says 60-year-old Florence Nassaka who lost her land to Agilis Partners that has since established a vast maize plantation.
One of the eviction victims attending the report launch
In February, the NGOs wrote to foreign governments notably, Britain, USA and the Netherlands as well as organisations that support the activities of the three companies to free their assistance due to the alleged human rights violations but no response has been received.
“With the support of a human rights defense organization – Witness Radio, the communities have filed several cases at the High court in Masindi to block the evictions. The cases are currently pending hearing dates,” the report states.
FAKE REPORT
In a statement issued on August 26, Agilis Partners refuted the allegations contained in the report, stating that they have never evicted anyone from land and has always been focused on empowering the communities.
“The lies contained in recent reporting are an abomination to Agilis’s core values and mission. Agilis, founded in and operating in Uganda since 2012, is a social enterprise whose mission is to empower Ugandans to feed Africa,” the company said in a statement.
“In 2017, Agilis purchased Ranch 20 and 21, a property in Kiryandongo district, from private individuals and developed the land into one of the largest maize and soybean farms in Uganda. This farm alone has replaced 3 per cent of the international maize imports to East Africa with local corn production and created employment for over 75 Ugandans,” the company further stated.
The statement signed by Emmanuel Onyango further claims that the company has never evicted anyone but rather worked with community leaders to develop a humanitarian compensation and resettlement plan for all of the illegal occupants. This, Onyango said, was after determining that occupants on the land were living on it illegally.