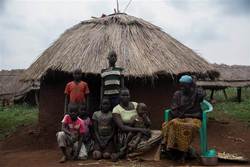 by Liam Taylor
KIRYANDONGO, Uganda, Aug 28 (Thomson Reuters Foundation) - People came from all over Uganda to Kiryandongo, uprooted by disaster and dispossession.
In recent decades thousands have settled in the district, some 200km north of the capital Kampala, hacking away the undergrowth on cattle ranches abandoned after the fall of former dictator Idi Amin in 1979.
But thousands of families who had settled on the vacant land are now being displaced from their homes to make way for commercial farms, land activists warned in a report published this week.
"People are crying, people are beaten," said Richard David Otyaluk, a resident who said he was born on the land and would not make way for a sugar plantation. Those who have left, he added, are now "roaming like weeds".
Tensions often arise on abandoned land concessions in Africa, researchers and activists say, with landless people settling in these areas, only to be moved out when new owners acquire the land.
Farming accounts for more than 20% of GDP, with about three-quarters of Ugandans working in the sector, according to the International Labour Organization.
A report by civil society group Alliance for Food Sovereignty in Africa, Barcelona-based charity GRAIN and Ugandan NGO Witness Radio accuses three foreign agribusiness firms of "violently evicting people ... without notice, alternatives or even negotiations".
"Small farms that once fed local communities and even the markets of Kampala are being destroyed to make way for plantations owned by foreign companies," Susan Nakacwa of GRAIN in Uganda said in emailed comments.
One of the companies is Agilis Partners, a U.S.-owned producer of grains and oilseeds, which received an award last year from the U.S. government for building "a thriving agriculture business in Uganda" that pays above-average wages and provides training for workers.
The others are Kiryandongo Sugar, a Kenyan-owned sugar business, and Great Season, a Sudanese- and Ugandan-owned grower of coffee, maize and sesame, among other produce.
All three companies, which operate separately, deny any forced evictions or human rights violations and say they bought the land legally.
People left voluntarily after receiving compensation for crops and buildings, the firms told the Thomson Reuters Foundation.
Agilis said in an emailed statement that its investment in Kiryandongo has created 75 permanent jobs and more than 400 temporary ones, and that it sources supplies from 15,000 local farmers.
It described the report as "lies" which are "an abomination to Agilis's core values and mission".
Ramadoss Rajasekaran, a manager at Kiryandongo Sugar, said it employs 2,000 people, which will rise to 6,000 once its factory opens.


MIGRATION
In Kiryandongo, a history of migration and miscommunication created confusion about the status of the residents, according to locals.
Some say they have lived there since the 1930s, but most arrived after the failure of state-backed ranching projects in the 1970s, and some only in the last few years.
In 2013 a government team visited the area and concluded people should stay on the ranches until the cabinet had made a final decision on the matter, according to a government letter seen by the Thomson Reuters Foundation.
But another letter from the land minister in 2017 said that the government had allocated four of those ranches to Kiryandongo Sugar, while Agilis had bought two others from a private owner.
Altogether the three companies have acquired more than 70 square kilometres of land in Kiryandongo, according to interviews and statements they gave to the Thomson Reuters Foundation.
The companies say that a few thousand people have left the area since 2017, while NGOs put the number at about 35,000.
Charles Ntairehoki Amooti, the elected district chairman, said the abandoned ranches had been settled by both "fraudulent" and "bona fide" squatters, and the latter were compensated by the companies.
There are conflicting accounts of how compensation was done.
Agilis said in a statement that it "generously compensated the affected individuals" after completing a digital census and using local government valuation rates.
There was a redress process for those who objected, and some households still remain on the land until compensation is agreed, it added.
But Joseph Walekula, a leader in an association of former residents, said he received just 2.2 million Ugandan shillings ($600) from Agilis for his house, banana plants and eucalyptus trees - an amount he said was paid late and left people in "a desperate situation".
Agilis said that Walekula had "voluntarily accepted this compensation" and his assets had been "confirmed by an independent surveyor".
COURT CASES
Nearly 30 displaced people have filed cases before a Ugandan High Court in May, accusing all three companies of human rights violations, which they deny.
The cases do not focus on the ownership of the land but on the manner in which people were moved off it, said Eron Kiiza, a lawyer representing the communities.
For example, court documents state that last year Great Season sent 60 men with sticks, machetes and bulldozers to demolish homes, whether occupants had been compensated or not.
"There has never been any kind of eviction of people," said Wycliffe Birungi, a lawyer for Great Season, adding that the company had prevented people displaced by other farms from moving onto its land.
The case against Kiryandongo Sugar states soldiers were deployed to support evictions and beat those who refused compensation, according to the documents.
"The whole process was haphazard, was sporadic, but most important was violent," said Kiiza.
An army spokesman said soldiers are not involved with evictions, although they do "provide security to investors against attacks by the locals, some of whom want to grab investors' land".
No dates have yet been set for the hearings.


NOWHERE TO GO
Some families still live on the Kiryandongo Sugar plantation, where they report ongoing intimidation.
Akot Lucy Auma, who rejected compensation and still lives in Kiryandongo with her seven children, said her father settled in the area in the 1970s.
Now, she has nowhere to go and says she is afraid to walk around in the evening because workers on the surrounding plantation threaten women with rape.
Otyaluk, who lives nearby, said company workers drove a tractor to clear his crops in March, accompanied by four soldiers who fired warning shots.
When he protested he was detained for nearly a week in a crowded police cell, even as a COVID-19 lockdown began.
Rajasekaran of Kiryandongo Sugar said he had not heard any allegations of rape or beatings by his workers.
He added "there were no complaints" during the main relocation phase in 2018, when more than 2,500 people were compensated or resettled, and that the few who remain are living "without disturbance".
The army spokesman said he had no information on Otyaluk's arrest.
The district police commander described reports of violent evictions as "malicious propaganda".
Most people have now left the land, but face hardship.
Near Agilis' soya fields several families shelter in a school, closed since its pupils left. Drying clothes hang on desks, while pigs oink in an empty classroom.
Hilaria Nteziryayo, who sleeps there with her children, said she came to Kiryandongo four years ago from the south-west, where "there was no land".
After losing their home her husband went north, looking for more land. Months later, she is still waiting for him to return.
Original source: Reuters
TWITTER
FACEBOOK
WHATSAPP
PRINT
E-MAIL
TWITTER
FACEBOOK
WHATSAPP
E-MAIL