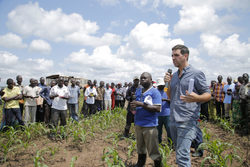 
Agilis Partners speaks out on land grabbing allegations
In light of the recently published allegations of land grabbing by some media houses, Agilis Partners have released a statement denying all these allegations and assured the public and its stakeholders that they have not evicted anyone from their land.
Below is the full statement.
Following recently published allegations of land grabbing, Agilis Partners would like to state that it has never evicted anyone from its land and has always been focused on empowering the communities in which Agilis invests. The lies contained in recent reporting are an abomination to Agilis’s core values and mission.
Agilis, founded in and operating in Uganda since 2012, is a social enterprise whose mission is to empower Ugandans to feed Africa. Sourced from our own large-scale sustainable farms and from over 15,000 smallholder farmers, we provide healthy and affordable food to over 550,000 East Africans annually.
In 2017, Agilis purchased Ranch 20 & 21, a property in Kiryandongo District, from private individuals and developed the land into one of the largest maize and soybean farms in Uganda. This farm alone has replaced 3% of the international maize imports to East Africa with local corn production and created employment for over 75 Ugandans. The farm also provides trainings to the local community on conservation and sustainable farming practices.
Agilis has never purchased land from the Government of Uganda or received land from the Government of Uganda. Allegations to the contrary are false.
Furthermore, Agilis has never evicted anyone. Agilis’s legal advisers, in consultation with the impacted community, local government and national government, determined that the occupants of the said land were living on it illegally. Rather than evicting them, Agilis worked with community leaders to develop a humanitarian compensation and resettlement plan for all of the illegal occupants. Extensive consultations with the leaders of this community occurred between June and December 2017.
The company generously compensated the individuals who voluntarily accepted to leave the property. Though Agilis was not legally mandated to compensate them, the company did not want to negatively impact the livelihoods of its community members.
To determine the compensation rates and ensure that the illegal occupants were leaving voluntarily and not forcefully, Agilis undertook the following process:
In a digital census, Agilis registered all occupants of the land and the assets they owned. Legal counsel reviewed the census outputs and reconfirmed that no individual could claim legal ownership or access to the land.
A surveyor confirmed the assets that each individual owned.

The surveyor determined the valuation of the assets by referring to the Kiryandongo District Local Government Valuation Rates which set out the valuation for assets.

If the individual agreed to the compensation proposed, an agreement for the compensation was executed between the occupant, the Local Government, an advocate, a representative of Agilis, and a translator, where necessary.

If the individual did not agree to the compensation proposed, the individual could object through a formal redress process or choose to remain on the land.

To this day, eleven households remain on the land because Agilis and those households have not agreed to a final compensation rate.
As a company recognized internationally for sustainability and community empowerment, Agilis followed international standards for illegal occupant resettlement. Given the scale of the project and the local and international scrutiny we receive, if these allegations were true, there would be evidence of violent evictions. The claims to the contrary are false.
The land that Agilis has acquired pioneers conservation agriculture in Uganda including zero-tillage, multi-crop rotations, integrated weed management practices and integrated pest management practices, which are transferred to local smallholder farmers through trainings. These practices help smallholder farmers increase their yield, preserve soil fertility and restore soil health. In 2019, Agilis trained over 3,400 local farmers on how to increase yields and improve their sustainability.
All cash flow from the project has been reinvested. No special tax credits or exemptions have been granted to Agilis by the government to undertake this investment.
Our investments are in partnership with the community and as such, our policy is that we do not evict but rather work with them. It therefore goes against our founding principles to evict anybody.
Original source: Uganda Tribune
TWITTER
FACEBOOK
WHATSAPP
PRINT
E-MAIL
TWITTER
FACEBOOK
WHATSAPP
E-MAIL