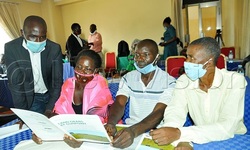 (L-R) Geoffrey Wokulira the Project Coordinator of Witness Radio Uganda Stella Akiteng, Joseph Walekula and Benon Barya some of the victims. Photo: Abou Kisige
Foreign investors dealing in agribusiness have been blamed for the ongoing land grabbing in Kiryandongo district in Northern Uganda.

According to a report titled, ‘Land Grabs at Gunpoint', land grabbing is happening on abandoned national ranches which have for long been settled on and farmed by people who settled in these areas while fleeing war and natural calamities in neighboring areas.

The report names three multinational companies-Agilis Partners, Kiryandongo Sugar Limited and Great Season SMC Limited as being at the center of the violent evictions of people from their homes.

Kiryandongo Sugar Limited is planting and producing sugar on 2,400 hectares and Great Season is growing coffee on 1,165 hectares.

The report notes that local people from Kiryandongo are being displaced without notice, alternatives or even negotiations and are right now trying to save their homes and lives.

The report states that more than 35,000 people from over 20 villages are homeless after being evicted from about 9,300 acres of land in Kiryandongo to pave way for large scale farming.

The report and research was done by Alliance for Food Sovereignty in Africa, Witness Radio Uganda and Grain, a non-profit organization which operates in areas where thousands have been evicted and are at the verge of losing their land.

The Project Coordinator of Witness Radio Uganda, Geoffrey Wokulira said gross human rights violations have been meted out on natives by the three above investment companies.

He made the remark while launching the report at Hotel Triangle in Kampala on Wednesday.

He noted that children caught up in the fracas are no longer going to school.

"Hundreds of young girls are engaged in early marriages because ideally they have no future and there is no responsibility these companies are showing," he said.

Wokulira said over 100 people have been arrested by police in an attempt to weaken, intimidate and cause fear among the evicted residents.

The reports says that when the three companies came talking about agricultural projects, the local people were at first open minded.

"The companies only needed to have come in properly, made the right arrangements, acquired land in an appropriate manner and acknowledged the communities that they found in the ranches, at least given them a share on the land,"

60-year-old Florence Nassaka, a resident of Canaan village in Kiryandongo said she was evicted by Agilis Partners.

"What kind of development did they bring? Do they give us some of the maize that you see there? Try walking into that maize farm and pick just one cob. See what will happen to you. It is only for the white man," Nassaka said.

She said the worst thing is the authorities in Kiryandongo do not help the affected at all; they just eat the white man's money and move on.

Sarah Apio, a resident of Kikungulu, Kitwara parish in Kiryandongo district said with her family of nine children and her husband James Olupot continue to live at ‘Ranch 28' but their family is one of the few that still remain but their home is completely surrounded by sugarcane plantation.

The report recommends that it's imperative for government to protect, children and all vulnerable groups whose livelihoods are constantly threatened by limited land use and access.

"African governments must stop handing out farmlands to foreign companies and start prioritizing their own people's access to land and local food systems,"

The report recommends that evictions should be stopped and villages must be fully compensated for any damages they have suffered.

The report further asserts that there's need for an independent investigation into the crimes of fraud, torture, sexual abuse, corruption and all illegal activities alleged to have occurred during eviction of communities from their homes.

Efforts to speak to officials from the three companies were fruitless as they could not pick our repeated calls.