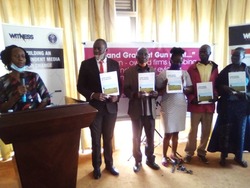 
Victims of land grabbing decry rape, torture and assault by multinational companies
By Nixon Segawa
Victims of land grabbing in Kiryandongo district have come out to decry the deplorable conditions that they are subjected to by the land evictors at the hand of security officials.
Three multinational companies- Agilis Partners, Kiryandondo Sugar Limited and Great Season SMC Limited are accused of involvement in grabbing land, violently evicting people from their homes and causing untold humiliation and grief to thousands of farming families residing in Kiryandondo district.
The land grabbing started in January 2017 on abandoned national ranches which have since been inhabited by people who came to the area fleeing war and natural calamities in neighboring areas.
According to David Richard Otialuk, a community leader that has allegedly suffered torture by security operatives, the local people are being displaced without notice, alternative settlement or even negotiations and are now desperately trying to save their homes and lives.
During the launch of a report in Kampala titled; “Land Grabs at Gunpoint” conducted by Witness Radio-Uganda, Alliance for Sovereignty in Africa (AFSA) and GRAIN, Otialuk narrated that their troubles started in 2017 on the arrival of Kiryandongo Sugar Limited with its large 2,400 hectare sugar cane plantation project.
Soon after two other companies came; Great Season SMC Limited a Dubai-based company that is building a coffee plantation on 1,165 hectares and Agilis Partners, a company owned by US businessmen and backed by several foreign development agencies and social impact investors that is establishing a large scale grains farm on around 3,850 hectares.
“They robbed us and evicted us with guns, there was no proper compensation done, the few who they purport to have compensated were forced to sign for the peanut payment while on gun point,” Otialuk alleges.
The community leader further alleges that, “The worst thing is that the authorities and security forces in Kiryandondo have not helped us at all but have instead sided with the foreigners that are torturing us on top of displacing us from the land that was occupied by our ancestors.”
He said the community has tried to reach out to every office but have got no help, adding that the President was misguided when he was briefed that the people were compensated and resettled.
Another victim, a one Lucy Auma born in 1986 said that since the companies came into the area, the women and children have suffered great violation of their rights with no help from the authorities.
“We have suffered ever since these multinational companies came into our area, as women we are constantly raped by the workers and security guards in these plantations. These rapists have infected us with several infections and have left many girls and women pregnant with unwanted babies,” Auma said.
It’s against these allegations that the Executive Director Witness Radio, Geoffrey Wokulira Ssebagala called on government to swing into action and protect women, children and all vulnerable groups from illegal and forced evictions. He also asked that the victims access their land and are protected because it’s where they derive their livelihood.
“Government should as well guarantee land security through issuing land titles as certificates of Land ownership to all occupants cultivating and residing in the land by virtue of birth and settled after being displaced by catastrophes and natural disasters,” Wokulira said.
He as well appealed to Parliament to immediately Commission an independent investigation into the crimes of rape, fraud, torture, sexual abuse, corruption and all other illegal activities that are alleged to have been committed during the eviction of the communities.