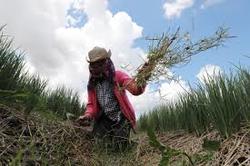 For Mai Hoy, a mother of eight children in rural Cambodia, seeking justice from an overseas company might previously have been unthinkable. But after 12 years, she finally got a little taste of it.

Mai, who was jailed for eight months while pregnant after staging a protest in 2009, is one of thousands of Cambodians in the northern province of Oddar Meanchey who say their lands were seized and homes bulldozed for sugar plantations belonging to Mitr Phol, the world’s fourth-largest sugar producer, and the largest in Asia.

The Thai firm, which is also a bioenergy producer, has operations and investments in China, Laos, Vietnam and Australia.

On July 31, the Bangkok South Civil Court ruled that 712 families or about 3,000 people who were displaced from their homes could proceed with filing a class-action suit against Mitr Phol.

A lower court had earlier thrown out the lawsuit application, citing the plaintiffs’ lack of Thai language skills and the complicated logistics of sending court notices to rural Cambodia.

Phil Robertson, deputy director of Human Rights Watch’s Asia Division, which was not involved in the lawsuit, said this was the first transboundary case he had seen in his two decades in the Mekong subregion, and it showed the “innovation and desperation” in the farmers’ fight for redress.

“Villagers have long ago given up hope of getting justice from the courts [in Cambodia] which is why they often engage in protests and direct action to defend their lands,” he said.

Mitr Phol did not respond to This Week in Asia’s request for comments.

Last year, Reuters reported the company as saying it had invested in Cambodia with government assurances that all land concessions were “processed legally and transparently”. It denied any involvement in human rights violations and withdrew from Cambodia by 2015.

In 2008 and 2009, Cambodia’s Ministry of Agriculture, Forestry and Fisheries (MAFF) granted plots of land to the Thai corporation’s Cambodian subsidiaries, allowing them to clear these for sugar plantations.

Land rights activists say the Cambodian government had allocated large swathes of land – including protected forest areas occupied by local communities – to domestic and foreign investors from countries like Thailand, China and Vietnam for development since the early 2000s, as part of plans to stimulate economic growth and eradicate poverty.

A 2012 moratorium on the granting of new concessions and a promise to review old ones both failed to resolve long-standing disputes between the companies and affected people linked to such concessions, the activists said.

Eang Vuthy, executive director of Equitable Cambodia, a local NGO which has been supporting the plaintiffs, said between 2018 and 2019, 10 years after villagers lost their land, Cambodian authorities gave two hectares each to only half of the affected families, regardless of the size of the plots that were taken from them.

The loss of land forced many affected people to move to other areas to find jobs or to become illegal economic migrants in Thailand, Vuthy said, adding that their plight has been exacerbated by movement restrictions and unemployment caused by the Covid-19 pandemic.

Before the global health crisis, Cambodians had been going to Thailand via informal routes to find work. According to Robertson of Human Rights Watch, this is easier and cheaper than the official channels but they end up in abusive and underpaid positions that Thai nationals do not want.

Said Vuthy: “It is never safe for them [to speak out]. They are under constant threats. But they have no options – if they want to find justice and remedies, they have to balance between risks and solutions.”

Ming Yu Hah, deputy regional director for campaigns at Amnesty International, which also supported the farmers’ lawsuit, said the ruling would force companies to think twice before engaging in business practices that could harm local communities or workers.

“Language and national or social origin are prohibited grounds of discrimination under international human rights law, and cannot be relied upon to deny access to justice,” said Hah, adding that the court’s decision did not absolve the Cambodian authorities of their duty towards the villagers.

The MAFF did not respond to requests for comment.

The plaintiffs have also received support from the National Human Rights Commission (NHRC) of Thailand. After receiving a complaint from the farmers, the commission said in 2015 that human rights violations had occurred and that Mitr Phol had to compensate the victims.

Sor Rattanamanee Polkla, one of the farmers’ lawyers, said it was uncommon for Thai courts to rule against their own big firms.

A meeting between the plaintiffs and the Thai company, known as a pre-hearing procedure, has been scheduled for October 5 by the Thai court. Polkla said the lawsuit process could take up to two years.

For now, Mai from Oddar Meanchey has been farming on the two-hectare plot allocated by local authorities, which she said is less than half of what was taken from her.

“A class action is crucial for us to seek remedy for all our communities. I want Mitr Phol to give us justice and appropriate compensation for the losses of our houses, properties and farmlands,” she said in comments provided to This Week in Asia via Equitable Cambodia.