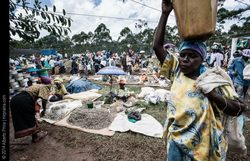 As the world concentrates on dealing with COVID-19 pandemic, multinational companies continue to evict communities from their land, tearing down their lives and their sovereignty to plant monocrops like oil palm and sugar cane in Africa, or GMO soy in South America.

Land grabbing is a term that gets tossed around when talking about the acquisition of large areas of land – by lease, concession, or outright purchase – by corporations or states, who then hold rights to the land for 49 years on average. What we don’t talk about is the methods of this practice and the impact it has on the communities.

As the term suggests, land grabbing is a forced snatching of land from communities who have inhabited it for hundreds, if not thousands, of years. Around the world, huge tracts of fertile land are being sold or rented for extremely low prices. Tens of millions of hectares have been surrendered in recent years to produce food crops for export or biofuels, to extract resources or to resell the land on the financial market, like any other commodity.

In May of this year, the clearing of 900 hectares of the Bugoma Forest began after a court ruled this swath of land was outside of the protected forest area. As in many other similar cases, the company is promising a higher quality of life for the communities, however, in this long fight, farmers and indigenous peoples, accounting to 5000, have already been violently evicted from their land multiple times in the past 20 years, as they kept fighting for their rights.

Destroying this piece of forest is bound to destroy the complex ecosystem of wildlife – including endangered chimpanzees, flora, and water sources it houses, having a ripple effect all the way to the River Nile.

This is done in Africa thanks to the weak land tenure regulations allowing governments to sell or lease the land to foreign companies for handsome budget-leveling cash. Africa is at high risk of land grabbing due to the continent’s biodiverse resources, and the vast amount of land still available for industrial monocrop agriculture.

Uganda has seen an increase in land grabbing in the past few decades due to the rich land and access to water, especially near and around Lake Victoria, and other areas near the forest reserves of Lake Albert.

This is not the first case

For decades agribusiness has been the main purpose of land grabbing and clearing in these areas. Big pieces of land are grabbed to develop profitable crops like sugarcane, palm oil, rice, sunflower, or to be used for intensive animal farming.

One of the biggest projects, introduced by the government and supported by international funding and partners with the private sector and Asian investors, is the Vegetable Oil Development Project. Native forests on the Bugala Island in Kalangala District and Buvuma Island in Buvuma District, Central Uganda, have been cleared to provide 10,000 hectares of land for oil palm plantations, evicting the 20,000 inhabitants who called this island home. The project claimed to work toward ‘decreasing the dependency on imported oil,” however, it has become an export product in the past couple of decades, while the food sovereignty of the communities evicted is under severe threat.

There has been sustained resistance to land grabbing by many communities since 1968 when the first sugar projects arrived in Lake Kyoga, where 3,000 families whose livelihoods come from farming, fishing on Lake Kyoga, cattle rearing, and pastoralism activities, live.

In the Mabira Forest, government authorities have been trying since 2007 to turn over 7,100 hectares to one company for sugar production, which has spurred a wave of illegal tree cutting.

There has been resistance by the general public, civil society organizations, and members of Parliament, but the government is not protecting this natural reserve and insists on handing over the land to investors.

The carbon market is also relevant as extensive plantations of exotic trees like pine or eucalyptus are established in exchange for carbon credits for large foreign firms (under the Kyoto Protocol developed countries can offset their carbon emissions by buying carbon credits from projects in the developing world through the flawed Clean Development Mechanism (CDM).  An open letter by 99 civil organizations around the world is asking for it to be discontinued citing human rights violations, among other negative impacts.

Land speculation is more linked to local investors who – thanks to their proximity to local politicians and advanced knowledge of a project’s status – buy land at a cheap price from small-scale farmers and then sell it for a very high price.

Impact on Biodiversity, the Environment, and the Communities

Africa has become a grabbers’ hot spot in the past couple of decades, severely threatening the environment, food sovereignty, and the very lives of local communities. Pushing communities out of their land into a complex world where they have no say or power makes them vulnerable, especially if there isn’t a plan for relocation and or fair compensation for their loss.

All areas affected by land grabbing around Uganda and Kenya are rich in tropical biodiversity, important cultural legacy, and as food baskets for many communities.

Slow Food supports initiatives like Save Bugoma Forests fighting for the rights and sovereignty of rural and indigenous communities. Slow Food is also working with other stakeholders to raise awareness about these issues, joining awareness-raising events like Save Bugoma Forests Kampala Run, organized by Run for Nature a consortium of activists against the destruction of indigenous territories and natural ecosystems to which Slow Food Uganda belongs.

In addition to an international awareness campaign, Slow Food works with communities whose land is often in the spotlight of the speculative interest of the new colonialists, such as the Presidia producers and the Gardens in Africa communities. These projects assert the right to food sovereignty and to a good, clean, and fair food for everyone by focusing on developing sustainable agriculture and safeguarding food production knowledge.