On 22 July 2020, representatives of the Japanese Ministry of Foreign Affairs visited Japanese parliamentarians, Mr. Michihiro Ishibashi and Mr. Satoshi Inoue, who have been supporting the joint campaign of Mozambican, Brazilian and Japanese civil society organisations against ProSAVANA, and announced the "termination of ProSAVANA". The representatives brought with them statements issued by the Mozambican Agriculture Ministry and the Japanese Embassy in Mozambique about the end of ProSAVANA.

The Japanese government and its International Cooperation Agency, JICA, thus end their long-lasting polemical programme without completing its principal project, ProSAVANA-PD, whose aim was to prepare an agriculture Master Plan for the Nacala Corridor region in Mozambique. ProSAVANA faced consistent resistance from local peasant movements since October 2012, supported by Mozambican civil society organizations under the umbrella of "No to ProSAVANA Campaign". A local administrative court verdict was even issued against ProSAVANA in August 2018.

Prior to this decision and announcement, ten Japanese parliamentarians shared their concerns over ProSAVANA with Mozambican peasants and civil society organisations, and strengthened their pressure on JICA to terminate the program due to the above-mentioned resistance and the court verdict.

The presence of the Brazilian government in the programme has long been non-existent after the failure to kick off the Nacala Fund, because of local and international resistance in Mozambique, Brazil and Japan.

This is a huge victory for Mozambican peasant movements and tri-national peoples solidarity.

For detailed information of this program and the struggle against it, please check articles about the programme on farmlandgrab.org, and the report "The Rise and Fall of ProSAVANA"

Below is a translation of the announcement posted by the Japanese Embassy in Maputo. 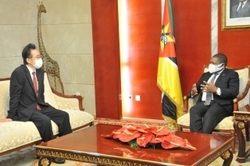 Ambassador of Japan visits His Excellency Mr. Filipe Jacinto Nyusi, President of the Republic of Mozambique

Mr. KIMURA Hajime, Ambassador of Japan to Mozambique, held a meeting with His Excellency Filipe Jacinto Nyusi, President of the Republic of Mozambique, on 16 July 2020, in which both confirmed that the Triangular Cooperation Programme (ProSAVANA) was successfully concluded, by the end of the "Project for the Establishment of a Development Model at Community Level with Improved Rural Extension Service in the Agricultural Development of the Nacala Corridor in Mozambique (PEM)".

President Filipe Jacinto Nyusi expressed his gratitude for Japan's support and cooperation in several areas, including agriculture, and reiterated that part of the content of the ProSavana Master Plan was useful in the decision-making process in the area of agriculture in Mozambique and will always be taken into account in the various processes. He also showed his intention to promote the sustainable development of agriculture taking into account the human rights of peasants.

For his part, Ambassador KIMURA Hajime conveyed to President Nyusi the intention of the Government of Japan to continue supporting the Government of Mozambique's development efforts, including in the area of agriculture.