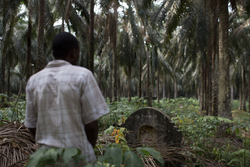 
How the legacy of colonialism built a palm oil empire

By Victoria Schneider
Due to the legacy of decades of colonial rule and the subsequent lack of local expertise and capital needed to meet the requirements of the World Bank’s economic incentive programs, newly independent governments drew on foreign capital during decolonization in the mid-20th to keep businesses and exports running. As a result, some of the biggest tropical commodity companies were founded during colonial times and still operate in countries once occupied by colonial powers.
One of these is Société Financière des Caoutchoucs (Socfin), a Belgian holding company that operates palm oil and rubber plantations through dozens of subsidiaries across Africa and Southeast Asia.
For years, Socfin has been rebuked by civil society organizations for alleged human rights violations at its plantations. Several lawsuits and complaints have been submitted over alleged misconduct including irregularities in land acquisition processes, poor working and housing conditions and the absence of the sustainable inclusion of local farmers.
Socfin, meanwhile, refutes criticism of its operations, saying its aim is to further development in Africa and ensure that local communities and their workers are the beneficiaries of their operations.