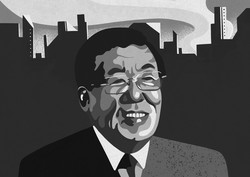 
Part 1: ‘Maybe they didn’t expect us to find it’
In April 2019, an Indonesian delegate stepped onto the stage at a conference hosted by Interpol, the international police organisation, at its Singapore headquarters. Among the audience were dozens of law enforcement agents from across the world, there to learn about how white-collar crimes and corruption underpinned the ongoing destruction of the world’s rainforests.
Interpol’s interest in forest crime had been stimulated by the billions of dollars the World Bank had calculated developing countries were losing in tax revenues to the global trade in illicit timber every year. There was a growing recognition among enforcement agencies that the crime scene was not only in rainforests. It was also in the dark recesses of the global financial system, through which bribes were paid and profits laundered.
The delegate, from an Indonesian nonprofit, walked the audience through a “suspicious” $22 million payment made by a conglomerate, which she declined to identify in her presentation. In corporate filings, the transaction had been described as a “consultancy fee,” paid to an unnamed “expert” who had helped obtain the rights to develop a vast oil palm plantation in the Indonesian province of Papua.
Rainforest in Boven Digoel district, Papua, in February 2020.
It was a curious payment. In Indonesia, permits for plantations have no significant official costs, the delegate noted, as dozens of suited enforcement agents watched from the auditorium. But the government officials who preside over the sector have a notorious propensity for corruption.

In fact, the delegate said, the payment bore the hallmarks of a common ruse deployed in major transnational corruption schemes, in which sham consultants are used to channel millions of dollars to officials in exchange for contracts or permits. Was this “consultant” simply an “intermediary for bribes paid to Indonesian public officials?”

“Maybe they didn’t expect us to find it,” the delegate, who asked to remain anonymous, later told us. “I think they were being careless.”
The company in question was the Korindo Group, a privately owned conglomerate that has been logging Indonesia’s rainforests since the 1970s. The payment was made at a critical juncture as Korindo rapidly grew its operations in Papua. Between 2009 and 2014, through this deal and several other concessions for which it obtained licenses directly from the government, Korindo acquired the rights to an area of land in the province twice the size of Seoul, the South Korean capital.
Boven Digoel and Merauke districts sit at the heart of the third largest rainforest left on the planet, on the island of New Guinea. Korindo now has extensive land concessions across the two districts.

As other major palm oil producers, under pressure from environmentally conscious buyers, pledged to stop clearing rainforest, Korindo plotted a different course. Since 2013, it has cut down 25,000 hectares of rainforest in Papua, at the heart of one of the most important ecosystems left on the planet.

Korindo’s explanations for the payment have shifted over time. When we asked about it this year, the conglomerate said the payment was not a consultancy fee at all. It was part of a share purchase, Korindo said, from a man named Kim Nam Ku, who had sold Korindo a shell company holding permits for the plantation. Korindo told us that Kim chose to mischaracterise the payment as a consultancy fee, for reasons only he could explain.
One of Korindo’s oil palm plantations in Papua, February 2020.
Over the past year, The Gecko Project and Mongabay — in collaboration with the Korean Center for Investigative Journalism-Newstapa and 101 East, Al Jazeera’s Asia-Pacific current affairs program — have investigated this payment and the role it played in Korindo’s expansion in Papua.
We reviewed corporate records, financial statements and permits dating back more than a decade to examine how Korindo had expanded its landbank. We traced the group’s complex ownership structure, from Indonesia, through Singapore, to multiple notorious tax havens, discovering how it deploys corporate secrecy techniques that prevent scrutiny of key aspects of its business.
We travelled to Papua on the trail of Kim Nam Ku, to find out what he had been up to in one of Indonesia’s remotest regions. Through interviews with his former colleagues, documents and a leaked cache of photos, we traced his career from the Papuan rainforests in the mid-2000s, through his role in an abortive attempt to establish a giant plantation project in Madagascar, to his multimillion-dollar dealings with Korindo.

Today, Korindo controls more land in Papua than any other conglomerate, and it has assumed many of the functions of the state in one of Indonesia’s most neglected and militarised areas. We estimated that since the turn of the century, it had exported products worth $320 million using timber harvested as it cleared the rainforest for plantations in the province. But indigenous Papuans we interviewed said Korindo had failed to keep its promise to improve their lives through jobs and development. We found infants suffering from malnutrition, while palm oil worth tens of millions of dollars is exported from their land each year.
We asked 10 anti-corruption experts, including former U.S. officials with experience investigating transnational corruption schemes, to review details of the payment and other information we uncovered. They said it was impossible to tell whether the payment had financed bribery without using powers available only to government agencies. But they considered the payment closely resembled the typology of bribery cases involving consultants. They pointed to the outsized fee, the high risks of corruption in Indonesia, Korindo’s shifting explanations and multiple other “red flags” as evidence that the payment merited investigation by law enforcement.

“Was the company just turning a blind eye to the possibility that the ‘expert’ was passing on huge amounts in bribes to public officials and community leaders?” said Bruce Searby, a former U.S. Department of Justice trial attorney who prosecuted transnational corruption cases.

Korindo categorically denies paying bribes. In a letter dated June 1, the head of Korindo’s legal team said that our findings, and especially any allegations of bribery, were “completely incorrect and false.” The conglomerate insists its plantations have benefited the Papuan people by providing jobs, education and healthcare. Further, it says it made a loss on the timber it harvested while developing plantations.

Conglomerates moving money through offshore companies and secrecy jurisdictions can present a challenge to law enforcement agencies bound largely by national borders. Korindo’s payment may never have entered Indonesia, placing it beyond the immediate reach of the nation’s regulators.
But it is likely the payment travelled through the banking systems of both Singapore and the U.S., countries that would be able to trace the payment at the request of the Indonesian authorities. U.S. agencies have a strong track record in assisting foreign partners in complex transnational financial investigations, and operate under laws that give them expansive powers to pursue evidence across the world.

Former officials from the U.S. Federal Bureau of Investigation and the Department of Justice told us enforcement agencies should investigate the payment. It was not just a $22 million case, they said; the fallout in Papua, and the impact on indigenous people and the rainforest, raised the stakes.
The starting point for the case could be quite simple. By pulling the bank records and tracing the payment as it flowed through the global financial system, they might be able to answer the question: where did the money go?

Continue to the full report