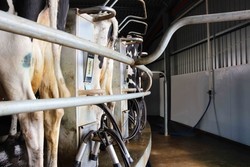 By Lynda Kiernan, Global AgInvesting Media
Beston Global Food Company has sold its four dairy farms in South Australia to PSP Investment and Warakirri Asset Management-backed Aurora Dairies in a A$40.4 million (US$27.8 million) cash deal that is expected to close by September 30, 2020.
The move to sell aligns with Beston’s plans to shift its focus by expanding into higher margin, value-added mozzarella cheese and lactoferrin production. As such, under the terms of the deal, Beston has negotiated with Aurora to secure 100 percent of its milk supply from the farms (currently approximately 17 million liters per year) for the coming 10 years, with an option to extend.
The transaction also achieves Beston’s strategic goal of freeing up capital to re-invest in factory assets, and to pay down debt to about 10 percent.
“The sale of our dairy farms is an important milestone in implementing the strategic initiatives outlined at Beston’s 2019 Annual General Meeting, and continues the journey toward a streamlined, cash generating company,” said Dr. Roger Sexton, chairman, Beston Global.
“The dairy farms allowed us to secure milk supply during our start-up phase. Beston is no longer reliant on owning farms due to our long-term milk supply contracts with independent farmers,” he explained.
“The Company’s focus, as it moves into its next stage of growth and development, is on increasing the utilization of its production capacities and generating enhanced margins with a product mix based around higher production of Mozzarella and Lactoferrin.”
Aurora, which is backed by Canada’s Public Sector Pension Investment Board (PSP Investments) and Australian asset manager Warikirri Asset Management, paid about a third over the A$26.5 million (US$18.25 million) that Beston bought the farms for five years before – exceeding book value. These proceeds will enable Beston to redeploy capital to position itself to meet a mozzarella supply deal it recently signed with buyers in China for 1000 tons per year.
“Notwithstanding some changes in product mix sales brought about by the closure of restaurants and other food service outlets during the COVID-19 pandemic, the demand for Beston’s Mozzarella products has been steadily increasing,” noted Johathan Hicks, CEO, Beston. “When we posted our Half Year Financials in February of this year, we reported that Mozzarella sales had increased by 59 percent to 4,290 tons, an increase of 2,690 tons on the previous Half.”
Hicks continued, “Since then, Beston’s award winning Mozzarella cheese has received a further boost in recognition when the Mozzarella produced for a major Australian retailer received the coveted Canstar Blue Award for the Mozzarella Cheese category, amassing it’s full 5 stars for overall satisfaction.”
Beston, which also owns Provincial Food Group, a meat processor in Victoria, already accounts for approximately one fifth of South Australia’s processed milk at its mozzarella and cheddar cheese plants in Jervois and Murray Bridge. However, the company still plans on increasing its milk intake from 111 million liters per year to 135 million liters per year by 2021.
“We are pleased to be forging this relationship with Aurora who share Beston’s desire to invest in growing the milk pool in South Australia overtime,” said Hicks.”The transaction will ensure continuity of milk supply to our cheese production facilities at Murray Bridge and Jervois and continue our focus on increasing output and improving efficiencies within the business.”
Established in 2019 through the acquisition of 11 dairy farms from Warikirri Dairies, Aurora currently manages 18 dairy farms in Victoria and the southeast region of South Australia with forecasted production of 100 million liters of milk per year.
These operations are overseen by Warikirri, which also runs Daybreak Cropping, another joint endeavor  between Warikirri and PSP Investments that farms 75,000 hectares (185,329 acres) across seven farms between Western Australia and Queensland.
“We are very pleased to have secured these high quality farms and increased our portfolio weighting to a very good dairy region,” said Ben James, CEO, Aurora Dairies. “ We look forward to building a strong commercial relationship with Beston over the coming years”.
The process for the sale of the farms was conducted via an international open tender that began in January, and concluded on March 5 of this year.
Due to the pandemic, the timing of final bids coincided with widespread travel restrictions, which impacted the due diligence process for bidders and slowed negotiations. However, Beston notes that the goodwill extended on the part of the short-listed bidders enabled the deal to progress to a binding sale agreement.
The deal remains subject to approval from Australia’s Foreign Investment Review Board (FIRB), which subsequently has seen its assessment process of overseas purchases lengthened from 30 days to as long as six months, due to COVID-19.