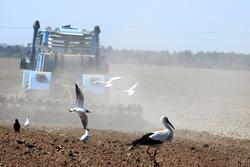 
Ukrainian farmers to enjoy preferential terms for farmland acquisition.
Farmers will receive preferential terms for farmland acquisition after the land market is introduced in Ukraine. That's according to a report by the Office of the President on the occasion of Farmer's Day in Ukraine, which is marked on June 19.
"Farmers will enjoy preferential terms for farmland acquisition. In particular, those who run business on state-owned lands handed to them for permanent use will be able to acquire those plots in 10-year interest-free installments," the statement said.
It is also reported that local governments will once again be granted authority to manage the lands of local communities outside the settlements – something they have been deprived of since January 1, 2002.
"Land reform will provide benefits to the national small and medium-sized agricultural producers. The Fund to ensure loans to small farmers and the Fund for the development of rural areas are to be set up. A national infrastructure of geospatial data will also be created, while blank spots will be filled in the cadastre," the report said.
According to the President's Office, Zelensky emphasized that without land reform, Ukraine would have no chance to become Europe's breadbasket again.
"This year, the parliament adopted, and I signed, a series of laws that streamline land turnover, making it transparent, fair, and efficient. The development of farming is extremely important for the Ukrainian economy," the President's Office quotes Zelensky as saying.
As part of reform launched in 2020, the state allocated UAH 4 billion to support Ukrainian agricultural producers, while access to funds will be simplified as much as possible for small farmers.
"It's enough just to register in the system of the Agrarian Register to receive assistance under the programs defined by government," the report says.
As UNIAN reported earlier, on April 28 Zelensky signed a law introducing the agricultural land market in Ukraine from July 2021.
The law provides for a phased land reform: from July 1, 2021, only citizens of Ukraine will be able to acquire farmland plots, with a 100 ha ceiling per buyer. At the second stage, from January 1, 2024, the limit will increase to 10,000 hectares, while legal entities will also be allowed to acquire land.